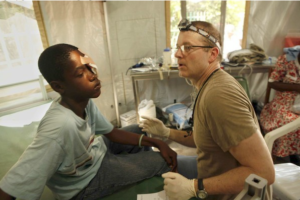 The line of patients at this city’s battered General Hospital forms early. The sick come to be seen by “the good doctors.”

At 10 on a recent morning, Jean Fenisto Joseph, 58, and his 28-year-old daughter, Roselord, were two of the several hundred Haitians standing or sitting on benches — a tightly packed crowd of people sweating silently under a Caribbean sun that had already pushed temperatures into the 90s. The pair had been waiting for about five hours, they said, and had at least another hour to go.

Like most in line that day, the father and daughter had not suffered any injuries in the earthquake that laid waste to Port-au-Prince in January. Instead, both complained of general aches and pains, describing the symptoms of common colds.

“I know the good doctors are here. I came to get some of the good help,” said Joseph, speaking quietly through an interpreter. “I would have stayed home if it was like before.”

In the wake of the 7.0 temblor that leveled much of Port-au-Prince and other communities in Haiti, a massive influx of emergency medical aid arrived to tend to the thousands of people injured. Doctors, nurses and medical supplies from more than 200 different medical organizations, by one estimate, descended on the island nation.

Now, however, the immediate medical crisis is over. The vast majority of victims in need of surgery, amputation or other life-saving interventions have been treated. The foreign doctors and nurses are still swamped, however, spending an increasing amount of time and supplies treating regular ailments not related to the earthquake.

They are becoming the de facto healthcare system for a country that has long failed to care for its own.

That reality has started a delicate and uncomfortable conversation among aid groups and Haitian health authorities over the inevitability that, in the weeks and months to come, much of the foreign medical aid will depart. Efforts are already underway to persuade wealthy donor nations to fund nascent plans for training a new generation of Haitian medical professionals and spend the hundreds of millions of dollars needed to build appropriate facilities.

In the face of so much need, however, such talks have been slow to gain traction, medical aid experts say, leaving many with the unsettling notion that Haiti’s ragged network of clinics and hospitals could soon be left largely on its own again.

“Access to healthcare in Haiti has been an issue for as long as anyone can remember,” said Hans van Dillen, head of mission of the Dutch chapter of Doctors Without Borders, which has provided medical services in Haiti for much of the last 15 years. “At the moment, Haiti is flooded with help — the whole humanitarian circus is here. Most came with no planning horizon and will soon leave. And then what? We’ll try, but it won’t be enough. In that respect, we’ll be back to square one.”

At the General Hospital, in the heart of Port-au-Prince’s devastated downtown, about 70% of the roughly 600 to 700 patients seen on a typical day recently had ailments unrelated to the earthquake, said the facility’s harried director, Dr. Alix Lassegue. That is different from the first weeks after the earthquake, when the hospital grounds were full of the injured and dead.

The number of patients arriving each day is also up by several hundred compared with a typical day before the earthquake, Lassegue said — indicating that many are taking advantage of the unusual availability of services.

By noon, for example, Dr. Fred Martin, who works in Chicago’s Cook County Hospital, had treated a man with a knife wound, a 2-year-old boy who had a seizure and another boy who had a fractured leg after being hit by a car, among dozens of other patients with chronic illnesses who had rarely, if ever, visited a doctor.

Outside, a mother showed New York City nurse Holly Parker a growth on the back of her infant daughter’s head. Parker explained to the young woman that it was not an emergency and that she should come back in a few months to speak with a surgeon. “We are having to tell a lot of people that,” she said.

The staff at the hospital is a mix of Haitian and foreign medical personnel, with the balance still heavily leaning toward foreign.

Only about a third of the hospital’s 1,900 Haitian staff members have been heard from since the earthquake hit. And many of those have yet to return to anything approaching full-time work at the hospital as they continue to deal with the personal fallout of the earthquake, said Dr. Neil Joyce of the International Medical Corps. The IMC has doctors and nurses working in continuous shifts of about 20 people and is coordinating the overall foreign aid response at the hospital.

Joyce estimated that the IMC can sustain its current rate of volunteers for about a month longer. In an effort to bring Haitian nurses back to work before the foreign staff tapers down, the IMC has converted what was the postoperative ward tent into a living space for nurses left homeless in the quake. It is also looking into providing transportation to the hospital for doctors and nurses who need it.

Similarly, the fivefold increase in the size of the Doctors Without Borders staff since the earthquake cannot be maintained for long, Van Dillen said.

Meetings to discuss how best to transfer back control of the healthcare system have begun between medical aid groups and officials from the country’s badly damaged Health Ministry. Little has been decided.

Joyce and Van Dillen said they hoped the attention on Haiti’s plight might make it possible to raise at least some of the funds needed to improve a badly broken healthcare system.

In Haiti, those who can afford it pay for access to private clinics while the masses of poor frequently stay away from the few public hospitals, where they are forced to pay at the gate and are treated with disdain. About 65% of women, for example, do not seek medical attention when giving birth.

Medical experts would not hazard a guess at the cost of building the five additional major hospitals that Van Dillen estimated are needed in Port-au-Prince, along with rehabilitating existing facilities and implementing a large-scale training program for Haitian medical students. The huge costs for such an endeavor and the lack of a clear plan on how to go about it, Joyce said, have made it a tough sell in conversations with potential donor nations.

The cost of letting the system return to its pre-quake days, however, would be paid for in human lives, Van Dillen said. That was a sentiment shared by Jean Fenisto Joseph as he continued to wait.

“I hope the good doctors never leave,” he said.

They are gone and there is nothing we can do to reclaim them.

What we must now realize is that the true disaster is about to overtake us, a much larger human tragedy that the loss of hundred of thousands.  Those who had operations – as a result of their quake injuries, now require follow-up medical assistance. This will be non-existent. Many of these people now have infections, because of the horrible living condition that exist.

No shelter. People living with no cover, or nothing more than a bed sheet. The rainy season has started, with cold nights…creating an environment for colds- flu – pneumonia – weakened resistance and infections caused by shit all over the place, garbage and rain-soaked soil that puts infectious elements into the ground water and living spaces throughout the disaster area.

Cholera will become a reality, Typhus too…plus others..

Tetanus  will become a major player in the game and there is no vaccine – for preventative action, or hemoglobin to treat active cases.

And the Preval government – in a CNN Breaking News Piece – Leslie Voltaire stated…”the government has tens of thousands of tents but is waiting to distribute these until the commission, set up, decides which houses will be destroyed and which will be kept…”   Coupled with the reality that the Preval government had effectively stopped the real survey of damaged/destroyed property one must assume that he wants to kill off a lot of Haitians so the population density will drop.

Preval is coordinating one of the greatest disasters in Haiti’s history.

It could well take a higher toll than the quake of 12 January 2010.

Someone must step in and stop this slide into the abyss!!