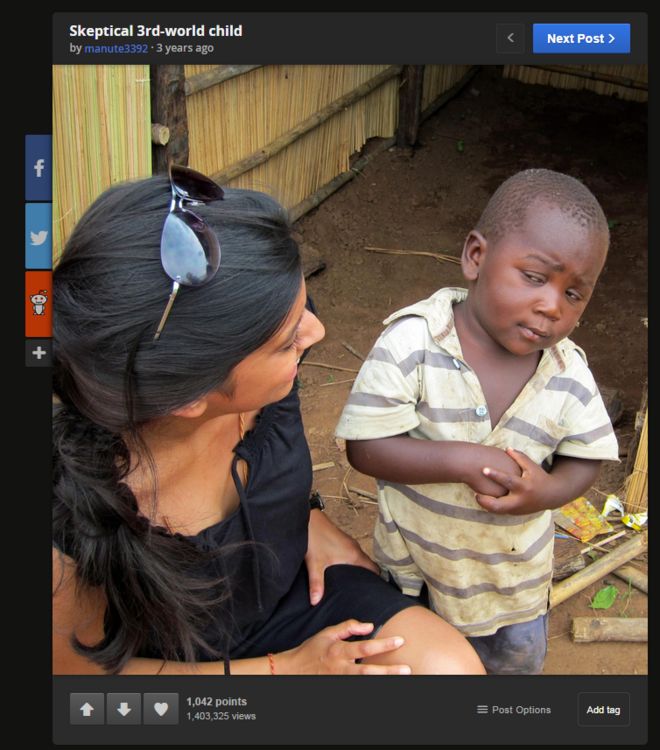 The photo has been copied and posted countless times, becoming known on the internet as “Sceptical Third World Child”. But with the images and funny captions has come a serious debate about how the Western world views and reports on poverty and African children.

He’s wearing dirty clothes and a wry expression, giving the mother of all side-eyes to a woman squatting next to him in the dirt.

This image was originally posted to Reddit three years ago by a man in Texas who spotted the amusing photo on the Facebook page of a friend. Since then, it’s been copied and captioned countless times. Many of the captions play on a crude stereotype of Africa as war-torn, poor, and suffering constant food shortages: 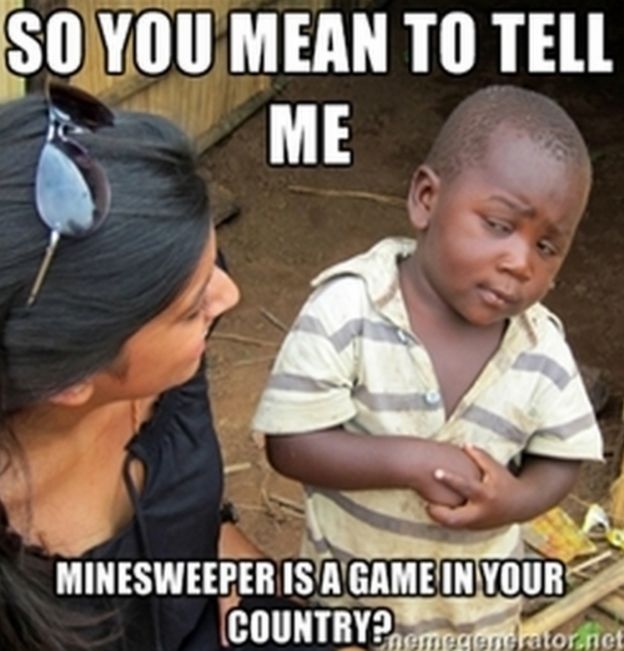 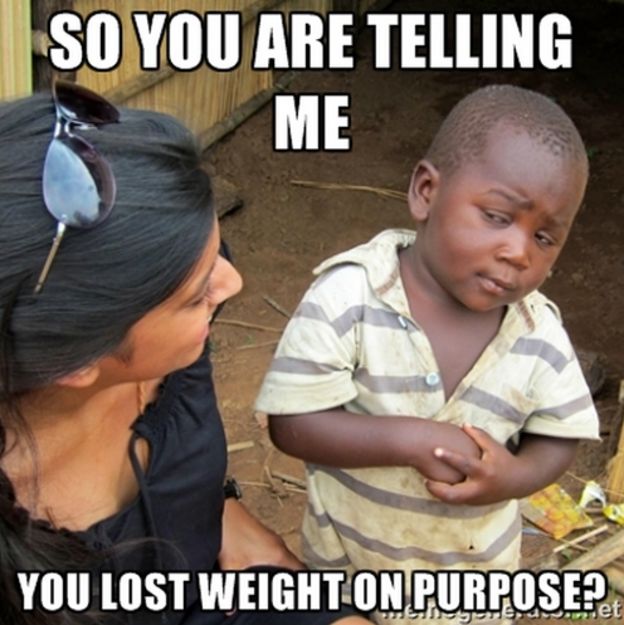 It’s become such a widespread internet meme that BBC Trending wondered – who is the boy? And what does the spread of his picture tell us about the internet’s culture and prejudices?

The first issue raised by memes like this is one of privacy. We haven’t yet found the boy or his parents, and we don’t even know if they are aware of the image going viral. We’ve chosen to publish the picture here because it has already been shared so widely and to highlight the debate it raises.

We have, however, tracked down the woman in the picture. Heena Pranav is a 28-year-old doctor who lives in Chicago. Back in 2012 she was a medical student and she’d travelled to Gulu, a city in northern Uganda, to help an aid project for women traumatised by the country’s war with the Lords Resistance Army. The project was run by Pros for Africa, a charity headed by a Catholic nun, Sister Rosemary Nyirumbe.

The child in the photo wasn’t connected to the aid project – Pranav says she met him at a local market and guessed he was about two or three years old.

“I was with a group of other medical students at the time, we were walking around and I saw this little boy, he seemed really sweet,” Pranav told BBC Trending radio. “His mom was nearby working in the market. I went up to him to play with him and say ‘hi’… he was the most animated child I’ve ever met.”

The boy didn’t speak English, and Pranav doesn’t speak the local languages (which include Luo, Swahili and others), but their brief encounter was captured on camera by another member of the group. Pranav says she hadn’t even heard of Reddit before her friend posted it on the message board and it went viral.

“I can’t imagine this would have happened,” she said. “I wished the kid and his mom could have known about it and somehow benefited from it, because I do think he was exploited in the process.”

Her misgivings are shared by others working in the aid field. Martine Jahre is vice president of Students and Academics International Assistance Fund, a Norwegian NGO which is famous for making viral videos that make fun of the way charities campaign for aid to Africa, often using poor-looking children in advertisements.

“It’s difficult for us to be the moral police and say that’s not very funny,” she says. “But I think people need to think more about what they’re sharing and the messages that it gives.

“You wouldn’t like it if your own kid became a meme that people made fun of all over the world. It really says a lot about how we think of ‘us’ and ‘them’.”

But the picture has also been deployed in different ways – with some Africans themselves using it to criticise Western ideas of their continent. A few have used the picture to poke fun at media coverage of poor countries: 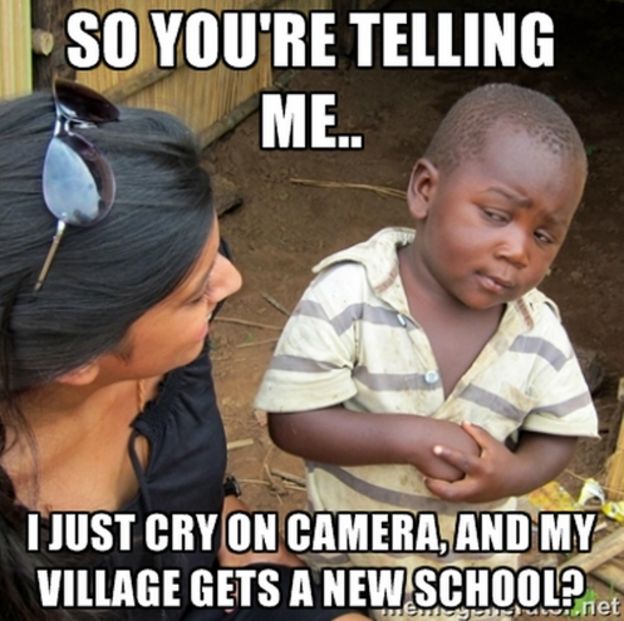 Christian missionaries have also been targeted by the online jokers: 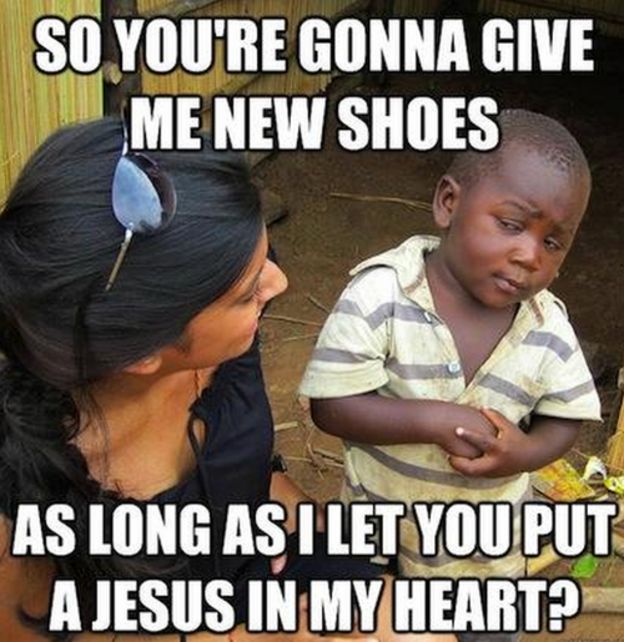 And the meme cropped up again recently, making the rounds in South Africa during protests over university tuition fees: 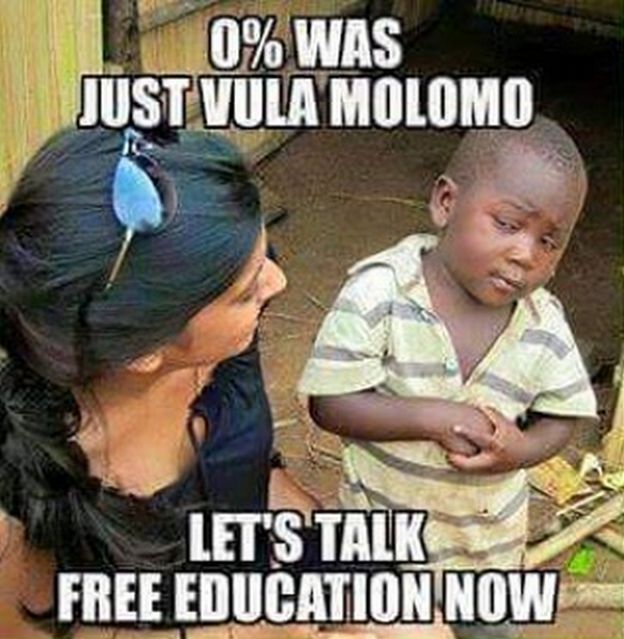 “It’s dangerous to tell a single story about the African continent but also about development in general,” Jahre says. “Our media shape our view of the world on a daily basis, but positive developments happen over time, and aren’t nearly as sexy to write about as crisis as war. When you only hear about Africa as hunger, war, diseases, HIV and AIDS, you really become apathetic.”

Trending is keen to find the child himself – so if you know him or his family, email us at trending@bbc.co.uk. 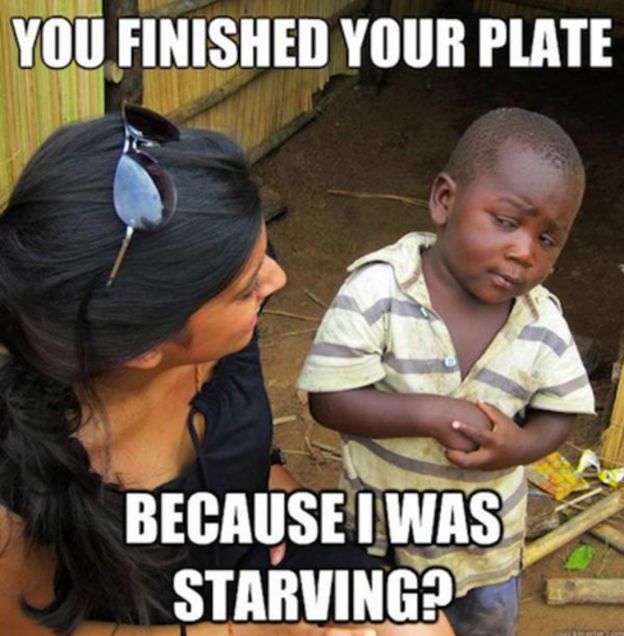