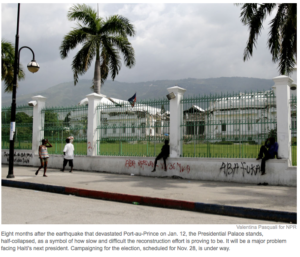 The Jan. 12 earthquake killed more than 300,000 people and left 1.5 million homeless and much of Port-au-Prince in ruins. The next president will have to oversee the reconstruction and try to redirect what was already one of the most dysfunctional nations on Earth.

Jean-Henry Ceant, one of Haiti’s leading notaries, and a founding director of Aimer Haiti, a movement to better the life of Haiti’s people, is one of the leading presidential candidates. Prior to the earthquake Ceant created  a hospital near the American embassy. It  was one of the few functioning facilities following the disaster. Aimer Haiti treated thousands of people in the aftermath and continues to serve this community.

Ceant himself comes from a poor background and recognizes the needs of Haiti’s majority, the need to improve basic living conditions and hopes to do so as president.

Before the quake, roughly 80 percent of the population lived in poverty. Roads, electrical lines, sewers and other infrastructure were in desperate need of repair. Now, they need to be completely rebuilt, along with most of the capital.

Alexis was part of the original planning, as Preval’s chosen candidate – Preval dumped him and now the truth comes out.
In Haiti, campaigning for next month’s presidential elections is under way. Nineteen candidates are vying to lead the earthquake-ravaged nation.

And with Haitian-American musician Wyclef Jean out of the race there’s no clear front-runner. It could be a contentious battle for one of the toughest political jobs in the world.

Michel Martely is among the candidates.

Wearing an open-collar white shirt and pressed gray slacks and with a shaved bald head, Martely is instantly recognized as he steps out of his SUV at the Port-au-Prince airport on a recent day. 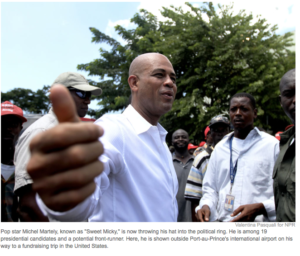 The baggage porters yell “Presidente!” and a crowd quickly forms around the musician turned candidate. Martely, who’s known as “Sweet Micky,” has been a leading pop star in Haiti since the late 1980s.

A Country Of Survival, Not Love

Now, in his first run for public office, Martely wants to lead the country. “We are living in a country of survival. We have no love for each other anymore,” he says.

Pop star Michel Martely, known as “Sweet Micky,” is now throwing his hat into the political ring. He is among 19 presidential candidates and a potential front-runner. Here, he is shown outside Port-au-Prince’s international airport on his way to a fundraising trip in the United States.

The country has huge numbers of people without work and in the wake of the earthquake huge amounts of work to do — yet, he says, no one is putting the two together. “We have the human resource to go ahead and start the cleaning. And yet no nobody is caring about that because everybody is too busy caring about making money,” Martely says.

“The state doesn’t serve anymore. It’s not about serving the population; it’s about getting rich when people get into power right now. So it’s time that we changed that,” he says.

Despite the fact that he has no political experience, Martely says he can unify the country as it moves forward from the devastating January quake.

Martely has a long list of pop hits to his credit, most of them sung in Creole. One liability for him may be that his reputation as an entertainer is that of a good-time party boy.

Onstage, he often would don a dress and a wig at a moment’s notice.

The Jan. 12 earthquake killed more than 200,000 people and left 1.5 million homeless and much of Port-au-Prince in ruins. The next president will have to oversee the reconstruction and try to redirect what was already one of the most dysfunctional nations on Earth.

Before the quake, roughly 80 percent of the population lived in poverty. Roads, electrical lines, sewers and other infrastructure were in desperate need of repair. Now, they need to be completely rebuilt, along with most of the capital. 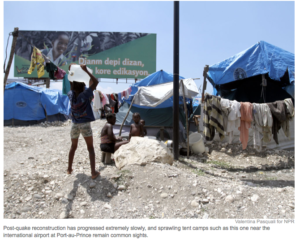 Post-quake reconstruction has progressed extremely slowly, and sprawling tent camps such as this one near the international airport at Port-au-Prince remain common sights.
Reconstruction comes slowly to Port-au-Prince
Valentina Pasquali for NPR

Post-quake reconstruction has progressed extremely slowly, and sprawling tent camps such as this one near the international airport at Port-au-Prince remain common sights.

“I think this is one of the most important presidential elections,” says Raymond Joseph, who recently stepped down as the Haitian ambassador to Washington to run for president.

But the Provisional Electoral Council rejected his candidacy

“They said that I didn’t have what they call the discharge, meaning discharging yourself of your duties as ambassador. Well, I do have the discharge,” he says.

In another controversial move, the council blocked Fanmi Lavalas, the popular party of exiled president Jean-Bertrand Aristide, from putting forward a candidate.

Allegations of fraud in Haitian elections are practically inevitable, but this year’s balloting faces additional challenges. The quake destroyed 40 percent of the polling stations in the country, killed tens of thousands of voters and displaced hundreds of thousands of others.

And numerous people lost all their documents and no longer have voting cards.

‘In The Hands Of God’

The Organization of American States has launched mobile clinics in Port-au-Prince to help people get new IDs. But on a recent day, the lines at one mobile clinic have disintegrated into chaos — and tempers are flaring.

Raymond Joseph, former Haitian ambassador, renounced his diplomatic post to run in this year’s presidential elections. But the Provisional Electoral Council excluded him from the final list of approved candidates because it said he had not given up his ambassadorial duties. He says the group’s decision is a sign that the ruling political elite don’t intend to let Haiti hold clean elections.

Maslin Jaunit says she’s been at the clinic all day and hasn’t been able to get a new ID card. Jaunit says she lost her house and all her documents in the quake. She says she can’t wait all day for a new ID and at this point she’s giving up.

The recovery from the January quake is moving slowly, and many Haitians say they’re skeptical about how much a new president can improve things.

Desoire Alexander, 64, is sitting in the second story of what used to be a pink, single-family house in Carrefour, a neighborhood in Port-au-Prince. The first floor collapsed completely during the quake. The cement under Alexander slopes sharply toward the missing back of the building.

He laughs when asked about the presidential candidates.

Officials in Haiti insist that logistically everything will be ready for the Nov. 28 presidential polls.

Alexander, leaning against a shattered block of concrete, says this election and the fate of Haiti as a whole are in the hands of God.

In what my mother used to see as “The pot calling the kettle black”  Jacques Edouard Alexis, failed Prime Minister and now Presidential Candidate revealed President Preval’s distribution of weapons (reported by Haitian-Truth.org some time ago – when Alexis and Preval were planning their election strategy.) Alexis was an intimate part of Preval’s planning and was involved in the original distribution.

He was more than willing to participate in Preval’s plunder of the Prime Minister’s office, under Michele Pierre Louis, when he took something like $500,000 per month from the PM’s accounts and stole 14 armored SUVs from the inventory.  He bought and controlled the Chamber of Deputies, and Senate for Preval. He controlled the cabinet for Preval. He coordinated the theft of $198,000,000 from Petro Caraibe funds and now he squeaks like a violated virgin.

Give me a break.

2 thoughts on “Weary, And Wary, Haitians Prepare For Elections: Jacques Alexi reveals Preval distribution of weapons as he prepares violence to disrupt elections.”