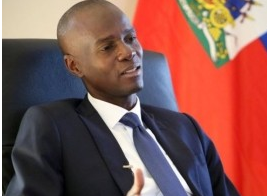 In an interview with BBC Mundo’s special envoy, President Jovenel Moïse, questioned about his intention to resign, replied “[…] for the past 33 years, we have had 15 presidents, 22 prime ministers, a large number of ministerial cabinets and several transitions and we are still in the current situation.

The solution to the problems we are currently experiencing is not the resignation of the President. The solution lies in unity, serenity, calm and coexistence […]”

Regarding the critics who accuse him of being the element of division in the country, Moïse explained “[…] The problem we are talking about is the system, not a person […] This means that these problems were poorly identified. That’s why now, when I talk to you about the system, it is important that all Haitians come together and try to make sure that all the current social, economic and political forces stop fighting each other. We can not build a future for this country by division.

We all have a plan to save Haiti, and we have to put all these plans on the same table, to create a plan that is not based on special interests but on collective interests […]”

On the PetroCaribe file and the allegations of his involvement in a possible embezzlement the Head of State reminds “[…] In the first place, no resolution has been signed with the PetroCaribe Fund under my administration. The last resolution with Petrocaribe dates from 2016 and I came to power in 2017 […]”adding for defense “Before my presidency, I was one of the representatives of a company that had a contract with the Haitian State. It was a contract signed by the Superior Court of Accounts for the repair of 3 km of road. The works were 85% completed and the company received 35% of the funds. I resigned from the company. I became President and the road is still there, you can go visit it.”

Asked if he knew that there was corruption with the PetroCaribe fund, Jovenel Moïse kick in touch “[…] I do not have this answer. The Superior Court of Audit is conducting an investigation. Justice is independent and fulfills its task of establishing the absolute truth so that guilty institutions are judged […] I can not express an opinion now, the judiciary must do its job. As Head of the Executive, I asked some international institutions to be present to review the case.

When the opposition asserts that if he does not resign there is a risk of civil war in Haiti, the Head of State sweeps this argument saying “The Haitian people are not like that, it is very peaceful, it is a population that loves Peace, it is a population which likes the serenity. Haitians do not like war, let alone if it’s between us. We are not in a position to kill each other.“