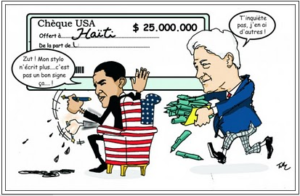 For the third time this week, Fox News Anchor Bill O’Reilly highlighted the “Haiti Aid Scandal”.  First, I think it would be helpful to outline the various pots of money that the US Government has allocated to Haiti so that we can all be clear about what is being discussed:

1.     In the immediate aftermath of the earthquake, the US Government allocated approximately $1 billion in aid.  Of that, only a couple hundred million actually got to the Haitian people for emergency assistance (medical, food, water, etc).  The rest was to fund the cost of sending the 82nd Airborne and military down to Haiti to stabilize the country – as the UN mission was very badly hit by the earthquake.

2.     Another $1.5 billion was allocated by the Congress for recovery (removing rubble) and rebuilding (permanent shelter).  Nine months later, more than 1.5 million people are still living in the streets.  That money was appropriated by Congress months ago and is only going to be released by the State Department in the coming weeks.  The State Department took months to submit their plan for how to combat waste and fraud with the allocated funds.

3.     There is a third pot of money in the amount of $500 million for infrastructure projects that is currently being held in the Senate by Senator Tom Coburn (R) because it is “unfunded” meaning they have not offset the budget expense by an equal budget cut.

The stunning news tonight is that the Clinton Global Initiative will receive all $1.15 billion of the $1.5 billion to deploy in Haiti as they see fit.  For the Haitian Diaspora in the US and Haitians in-country it is somewhat surprising that the Secretary of State would put the money exclusively in her husband’s hands.  This is disappointing because it is not what President Barack Obama promised Haitians.  He committed to developing a partnership with Haiti – meaning that US aid would go to directly to Haitian institutions to strengthen their capacity not third party.

There are several potential implications for this money going exclusively to the Clinton Global Initiative (CGI).  First, there are potentially other organizations that would be deserving of some of these funds but now everyone will have to prove themselves worthy to Mr. Clinton.  Second, this means big dollars for Clinton’s NGO.  The standard overhead or administrative fee used by NGOs is 22%, which means Bill Clinton’s NGO potentially just secured $253 million in overhead expenses, and has potentially fully funded his Initiative for years to come.  CGI will then presumably make grants to other organizations, which will also require an overhead operating budget.  This multiplier effect on overhead could result in more money than necessary going to operational budgets for international NGOs.  This is potentially a lot of money going into the US system and not actually reaching the victims. Third, Clinton does not have a stellar track record of helping Haiti.  On March 31, 1995, President Bill Clinton promised the people of Haiti 1,000 km in new roads, 1 million trees and job creation (see:http://ftp.resource.org/gpo.gov/papers/1995/1995_vol1_437.pdf).  The people of Haiti are still waiting for him to fulfill that 15-year-old promise.  This has led to much skepticism about President Clinton’s high profile position in Haiti, which was brought to light after his appointment as UN Special Envoy last year (see: http://solutionshaiti.blogspot.com/2009/07/former-president-clinton-takes-his.html ).

But most importantly, the question remains: Why doesn’t the US use the money to directly fund Haitian institutions (government, civil society, and Diaspora) and place technical advisors within those organizations to monitor the funds and program implementation?  Haitians have serious doubts that the Clinton Global Initiative will use the money to strengthen Haitians and Haitian civil society.  And, they believe that part of the reason that aid has been so ineffective after all these years is because money has not been used to strengthen capacity.

One of the themes that emerged after the earthquake was the complete inability of the Haitian Government to respond to the earthquake and the disarray that the country is in despite $11 billion in aid money that has been poured into the country over the past 25 years.  What happened was that most donors channeled their aid through international NGOs and bypassed the Haitian Government, civil society, Haitian Diaspora and other Haitian institutions.  To be sure, the Haitian Government is rife with corruption, but there are ways to build capacity and fight corruption.  What happened was that many international NGOs built capacity in-house instead of building Haitian capacity. Furthermore, there was a lack of coordination among aid agencies resulting in redundancy or one-off programs that did little to benefit Haiti in the long term.  If the United States wants to help Haitians and have a real impact with this money, they should change the framework and prioritize investing in bringing skills and capacity to the Haitian people rather merely financing NGOs.

We must realize and appreciate the game that is being played here.

A couple of months ago, Cheryl Mills, the attorney who defended Bill Clinton in the Monica Lewinsky affair, and now Hillary Clinton’s right hand man….flew into Haiti and was very blunt and rude in her conversations with Ambassador Merten. She told him that Hillary Clinton – our Secretary of State, did not want elections and he should act accordingly.

Someone should ask Ambassador Merten about this, under oath, and the truth will be revealed.

Hillary and Bill want an Interim Government they can control.

Barring that they want a new President that they can control.

The Clintons will work to disrupt the electoral process to see a government to their tastes, a government that will turn its back upon the corruption that must follow. Bill and Hillary are prepared to rape Haiti in an effort to accumulate a massive fortune.

This fortune will be used to mount an assault on the American presidency during the next electoral cycle.

It was good advice then.

It is better advice now!!