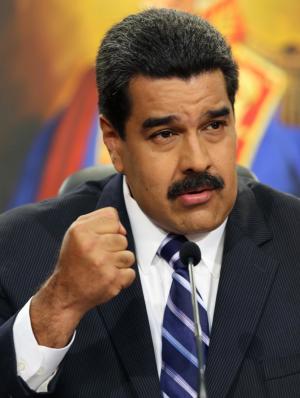 CARACAS, Venezuela (AP) — Venezuela’s government on Tuesday confirmed that the economy is struggling to emerge from a deep recession but President Nicolas Maduro said the crisis engulfing the oil-rich nation could have been a lot worse.

In an almost three-hour long press conference, the socialist president blamed the severe slump on his government’s opponents, who brought the economy to a standstill during deadly protests earlier this year and are now heartened by a recent plunge in oil prices that they hope will loosen Maduro’s grip on power ahead of key congressional elections just months away.

“We’ve contained the economic war, but it’s not yet been defeated,” Maduro said, valuing the government’s efforts to step in for private business and restrict smuggling.

Maduro’s comments came hours after the central bank said gross domestic product shrank 4.8 percent on an annual basis in the first two quarters of 2014 and 2.3 percent in the July-September period. Inflation soared to 64 percent in November from 54 percent a year ago.

The report came as no surprise to economists, who blame the government’s tight control of prices and foreign exchange for scaring away investment and widespread shortages of even essential items such as soap and sugar.

But being the first GDP data released in over a year, it was a rare admission of the depth of a crisis forecast to worsen if prices for Venezuela’s oil, which have fallen by half in the past six months, remain low. Petroleum accounts for 95 percent of Venezuela’s exports and the government needs substantially higher prices to fund spending that expanded dramatically during the revolution started 15 years ago by the late Hugo Chavez.

Maduro repeated a pledge to straighten the economy by eliminating wasteful spending. He cited Venezuelan embassies abroad and a government fleet of imported cars as dollar-sucking areas ripe for cuts.

But he avoided announcing more pronounced budget-saving measures economists say are needed to avoid a default on the country’s debt, such as hiking gas prices that are the cheapest in the world. He also disappointed those hoping for an overhaul of the country’s rigid currency system.