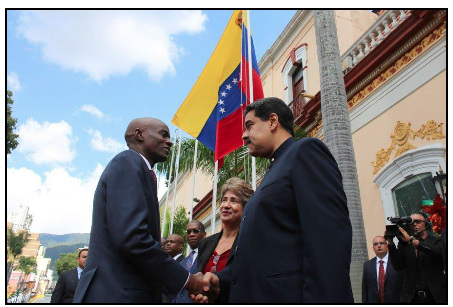 (RNV) – The Bolivarian Government of Venezuela and the Republic of Haiti signed on Monday a set of agreements on energy, agricultural development and financing.

After the working meeting that took place at Miraflores Palace in Caracas, the President of the Bolivarian Republic of Venezuela, Nicolas Maduro, explained that the first agreement will strengthen agricultural cooperation for the production and trade of food. The second has to do with investment in a set of projects for development.

“We have ratified our deep relationship of work, of understanding, of brotherhood, in function of a common destiny: the Great Homeland, that is built with concrete facts on the base of a great brotherhood and solidarity”, emphasized the national agent chief executive during a broadcast by VTV.

For his part, the President of Haiti, Jovenel Moïse, expressed his gratitude to the Head of State for continuing to strengthen the bilateral relations that are historical.

He also mentioned that in the meeting the bonds of brotherhood and solidarity between the two peoples were ratified.

This set of agreements is signed on the first official visit made by Moïse to Venezuela after his appointment as chief executive, on January 3, 2017