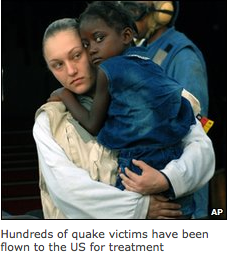 The airlifts stopped last Wednesday because of what Washington described as “logistical issues”.

Doctors warned that scores of people would die if flights did not resume.

Meanwhile, some Haitian children identified as orphans by a group of Americans who were taking them abroad may have parents, it has emerged.

Ten Americans are due to appear in court on Monday, after being stopped at the border with the Dominican Republic in a bus with 33 children.

Haiti imposed new controls on the movement of children following the 12 January earthquake that killed up to 200,000 people.

Officials fear that orphans are now particularly vulnerable to being abducted and sold for adoption.

Only women will be allowed to collect the 25kg (55lb) rice ration, enough to feed a family for two weeks.

White House spokesman Tommy Vietor said in a statement on Sunday evening: “Having received assurances that additional capacity exists both here and among our international partners, we determined that we can resume these critical flights.

“The flights are on track to resume in the next 12 hours. Patients are being identified for transfer, doctors are making sure that it is safe for them to fly, and we are preparing specific in-flight paediatric care aboard the aircraft where needed.”

Mr Vietor said the US government had worked with international partners, NGO’s and US states to increase capacity to treat the Haitian patients.

Hundreds of patients with spinal injuries, burns and other wounds have been flown on US military planes to America since the quake. Most of them have been treated in Florida.

But the US halted the so-called mercy flights on Wednesday.

A White House spokesman told the BBC the move was due to “logistical issues”, not over medical costs as had been reported earlier.

On Sunday, SOS Children’s Villages international charity said at least one of the 33 Haitian youngsters whom the Americans had tried to take out of Haiti, a little girl, insisted her parents were alive.

“ Our understanding was that we were told by a number of people, including Dominican authorities, that we would be able to bring the children across ”
Laura Silsby New Life Children’s Refuge

Charity spokesman George Willeit told journalists the girl said she had believed she was being taken to a boarding school or summer camp.

Mr Willeit also said many of the children had been found to be in poor health, hungry and dehydrated.

One of the smallest – just two or three months old – was so dehydrated she had to be taken to hospital, he added.

Haitian authorities said none of the children had documentation or proof that they were actually parentless.

The 10 Americans, who are now in police custody in Port-au-Prince, said they were taking them to an orphanage in neighbouring Dominican Republic.

The five men and five women, from Idaho-based charity New Life Children’s Refuge, were travelling on a bus with the children near the border when they were stopped.

They said the youngsters had all lost their parents in the quake.

Laura Silsby, the group’s leader, said the arrests were the result of a mistake.

“Our understanding was that we were told by a number of people, including Dominican authorities, that we would be able to bring the children across,” she said.

“The mistake we made is that we didn’t understand there was additional paperwork required.”

But the BBC’s Rupert Wingfield-Hayes, in Port-au-Prince, says the regulations are very clear – each case of child adoption must be approved by the government.

Even before the earthquake, he adds, child-smuggling was a massive problem in Haiti, with thousands of children disappearing each year.

3 thoughts on “US to resume shortly Haiti medical evacuation flights”