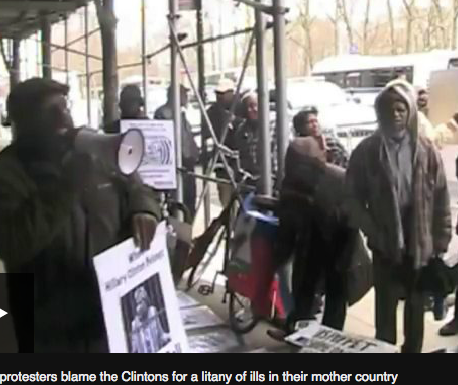 Donald Trump has said the work of Bill and Hillary Clinton in Haiti was a “disgrace”. What really happened?

“The Clinton family, they are crooks, they are thieves, they are liars,” says Haitian activist Dahoud Andre.

He has been leading protests outside the Clinton Foundation headquarters in Manhattan and Hillary Clinton’s presidential campaign base in Brooklyn for the last two years.

He said protesters from his small activist group, the Committee to Mobilize Against Dictatorship in Haiti, will continue to level their allegations – so far all unproven – if the Democratic candidate wins the White House. 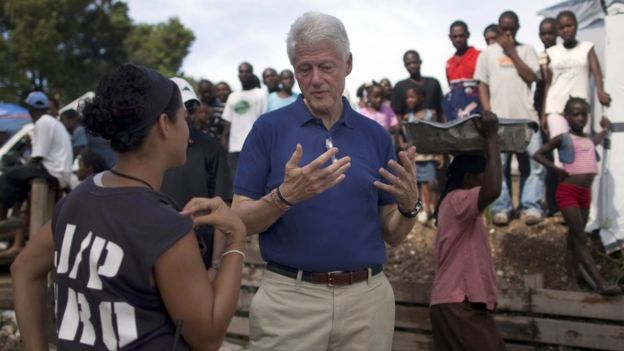 Republican presidential nominee Donald Trump raised the matter in the third and final presidential debate when he told Mrs Clinton: “I was at a Little Haiti the other day in Florida.

“And I want to tell you, they hate the Clintons, because what’s happened in Haiti with the Clinton Foundation is a disgrace.”

Mrs Clinton retorted that she was proud of the foundation’s work, and pointed out her rival’s namesake charity had spent money on a lifesize portrait of himself.

The Clintons’ history with the world’s first black republic dates back to their 1975 honeymoon, when they met a voodoo priest and visited a hotel where Ernest Hemingway once stayed. 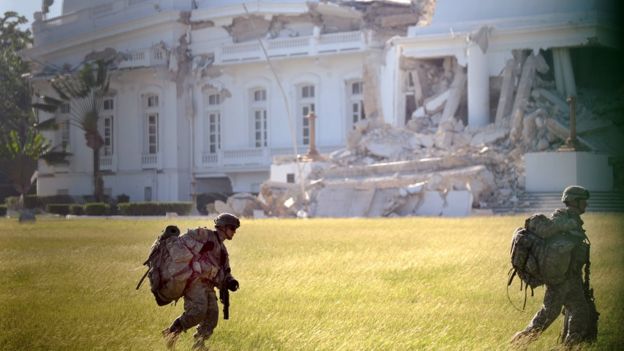 Few could have guessed the two young Americans touring the attractions that December would one day wield such influence over the impoverished Caribbean island nation.

Mr Andre is not alone among his compatriots in blaming the once-and-perhaps-future first couple for a litany of ills in Haiti.

Kim Ives, editor of Haiti Liberte newspaper, told the BBC: “A lot of Haitians are not big fans of the Clintons, that’s for sure.” 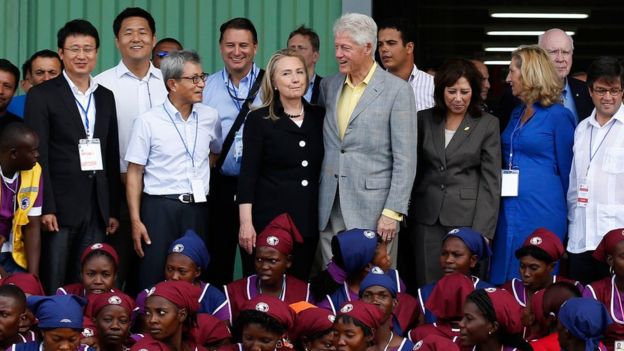 “The fact the Clintons kind of took over things after the earthquake and did a pretty poor job of it translates to why the Haitians have a pretty dim view of them,” he added.

Mrs Clinton was Secretary of State and Mr Clinton was UN Special Envoy to Haiti when the January 2010 earthquake struck, killing an estimated 220,000 people.

Some $13.3bn (£10.9bn) was pledged by international donors for Haiti’s recovery. 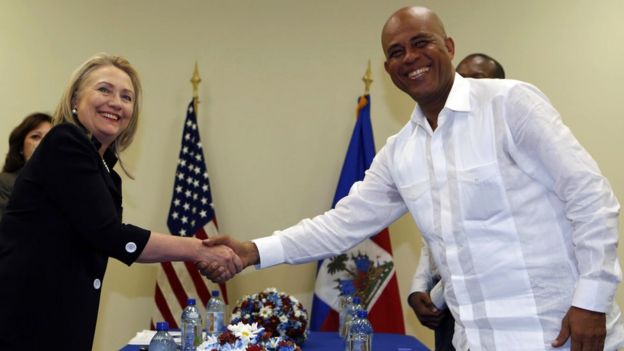 But the IHRC found itself under fire as frustrations mounted at the slow pace of recovery.

Its mandate was not renewed by the Haitian parliament in 2011. 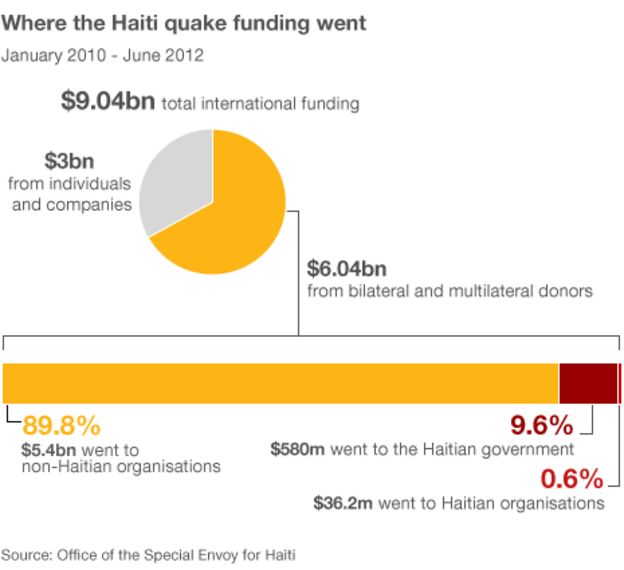 A US Government Accountability Office report discovered no hint of wrongdoing, but concluded the IHRC’s decisions were “not necessarily aligned with Haitian priorities”.

Mr Clinton’s own office at the UN found 9% of the foreign aid cash went to the Haitian government and 0.6% to local organisations.

The bulk of it went to UN agencies, international aid groups, private contractors and donor countries’ own civilian and military agencies.

For example, the Pentagon billed the State Department hundreds of millions of dollars for sending US troops to hand out bottled water and keep order on the streets of Haiti’s ravaged capital, Port-au-Prince. 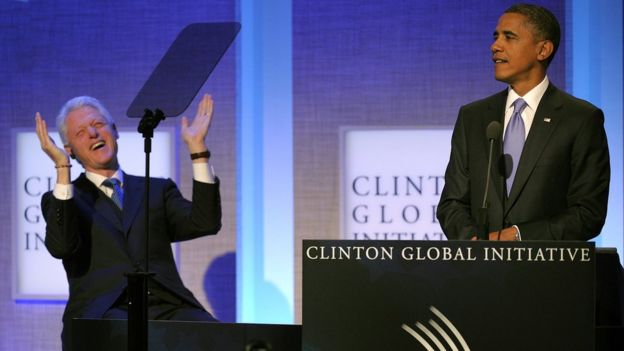 Jake Johnston, an analyst with the Center for Economic and Policy Research, a nonpartisan group that has studied the quake reconstruction, told the BBC “it’s hard to say it’s been anything other than a failure”.

But he believes the State Department and IHRC simply replicated the mistakes of the whole foreign aid industry by chasing short-term gains instead of building longer-term capacity on the ground.

“They relied too much on outside actors,” Mr Johnston says, “and supplanted the role of the Haitian government and domestic producers.”

While the Clintons in their respective roles clearly had a say over where some of the quake relief cash flowed, their political enemies have wrongly claimed the family foundation directly controlled all the billions in funds.

The foundation itself raised a relatively modest $30m for aid projects in Haiti.

A spokeswoman for the charity told the BBC: “Every penny of the more than $30m raised was deployed on the ground, with no overhead taken by the Clinton Foundation.” 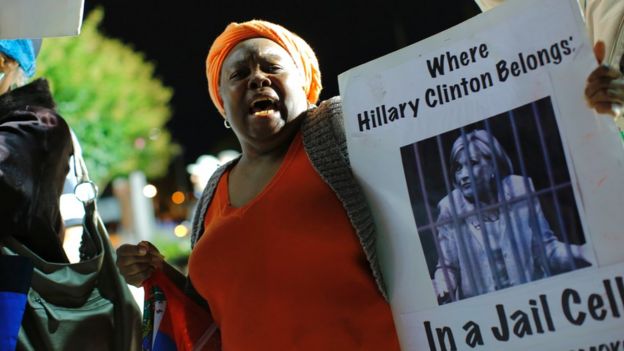 Mrs Clinton’s campaign has said she never did anything at the State Department as a result of donations to the Clinton Foundation.

But potential conflicts of interest have emerged.

After the earthquake, disaster capitalists flocked to the nation of 10 million people, which is about the size of the US state of Massachusetts.

Private contractors were eager to sell services, in what one US envoy described in a Wikileaks-disclosed diplomatic cable as a “gold rush”.

In email exchanges with top Clinton Foundation officials, a senior aide to Mrs Clinton, who was then-secretary of state, kept an eye out for those identified by the abbreviations “FOB” (friends of Bill Clinton) or “WJC VIPs” (William Jefferson Clinton VIPs).

“Need you to flag when people are friends of WJC,” wrote Caitlin Klevorick, a senior State Department official who was vetting incoming offers of assistance coming through the Clinton Foundation. 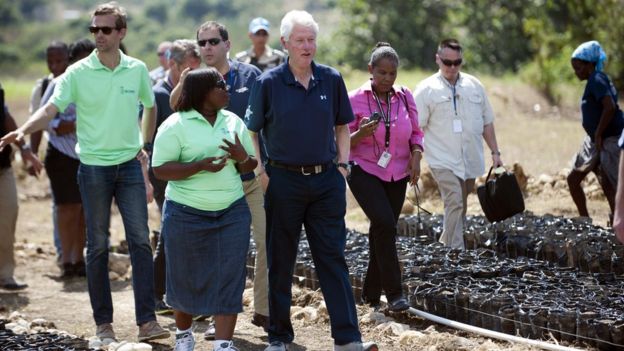 Image copyright AFP Image caption Since 2010, the Clinton Foundation has raised a total of more than $30m for Haiti

“Most I can probably ID but not all.”

Ms Klevorick told ABC News she made the comments about Mr Clinton to help pin down whether would-be contractors had a history in Haiti or with disaster relief.

The emails, which were obtained through a Freedom of Information Act lawsuit by the Republican National Committee, have fuelled claims the Clintons were running a pay-to-play operation, though no hard evidence of this has emerged.

House Republicans are already laying the groundwork for a volley of congressional hearings into the Clinton Foundation in the event the Democratic candidate wins the White House in a week’s time.

Possibly the most enduring criticism of the Clinton Foundation’s work in Haiti stems from its signature project, a garment factory known as the Caracol Industrial Park.

The foundation, working with the Clinton State Department, helped arrange a US-subsidised deal with the Haitian government to build the $300m factory complex in 2012.

Several hundred farmers were evicted from their land to make way for the 600-acre manufacturing site, which produces clothes for retailers such as Old Navy, Walmart and Target.

South Korean textile giant Sae-A Trading Co, which is the main employer at the facility, subsequently donated between $50,000 to $100,000 to the Clinton Foundation.

Mr Clinton declared 100,000 jobs would be created “in short order”.

But the Caracol Industrial Park has created only 8,000 jobs. 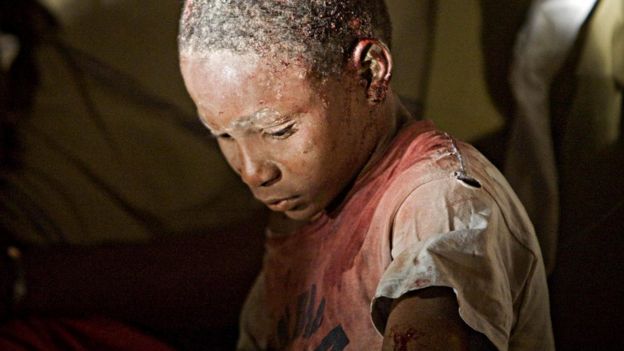 Sae-A spokeswoman Karen Seo told the BBC: “The rate of job growth depends both on the efficiency in building facilities, as well as customer demand – including the long tail of the recession. Momentum is growing and we are optimistic.”

In its defence, the Clinton Foundation – which has raised more than $2bn from over 330,000 donors since its 2001 launch – points to its A rating from philanthropic monitors.

But the watchdog’s president, Daniel Borochoff, told the BBC the high mark was not intended to reflect whether Mrs Clinton kept donors to her family’s foundation at appropriate arm’s length, or provided favoured access as secretary of state.

The Clinton Foundation rebutted any suggestion of special favours, saying that in the aftermath of the Haiti quake they worked with a “wide range” of partners to mobilise relief efforts immediately “and many people they had previously worked with responded to this call to help”.

The charity’s statement to the BBC continued: “President Clinton and the Clinton Foundation’s only goal in Haiti is to help the people of Haiti.

“Since 2010, the Foundation has worked on the ground in Haiti with a range of partners – helping more than 7,500 farmers lift themselves out of poverty; improving the Haitian environment by planting more than 5 million trees and installing more than 400 KW of clean energy; and supporting women through literacy training and job skills for over 2,000 women.”

Mrs Clinton’s presidential campaign did not respond to requests for comment from the BBC.

In the Little Haiti neighbourhood of Miami that was visited by Mr Trump this September, the head of a local women’s advocacy group has questions for Mrs Clinton.

She told the BBC: “The more Secretary Clinton refrains from responding to the concerns and questions from the people of Haiti, this perception that she’s trying to evade responding will continue. 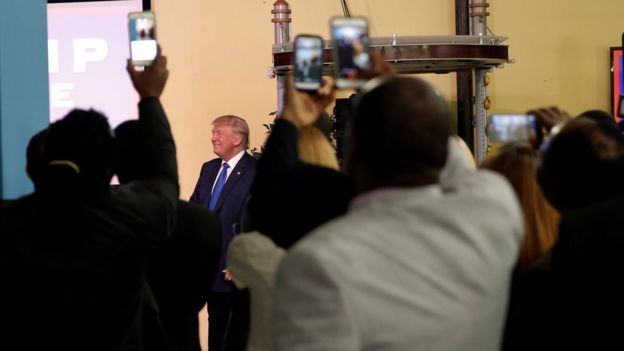 “Instead of allowing these questions to linger and fester, why not come clean? The questions will not go away, they will continue.”

As for Mr Trump’s attempt to woo Haitian-American voters, it may prove a longshot, given his threats to round up millions of undocumented immigrants.

There are an estimated 150,000 members of this electoral bloc in Florida, a crucial swing state where the presidential contest is on a knife-edge.

Jeff Lozama, chairman of the Haitian American Chamber of Commerce of Florida, told the BBC that regardless of misgivings about the Clintons’ work in Haiti, his countrymen and women in the diaspora overwhelmingly hope she wins election on 8 November.

He says many of them fear what a Trump presidency could mean for their US status.

“Haitians cannot afford to have any mass deportation,” he said.

“Immigration is the number one item (among Haitian-Americans) for these candidates.”

1 thought on “US election 2016: What really happened with the Clintons in Haiti?”