Going Green is a series of special programs that air on CNN International reporting on some of the world’s most pressing environmental issues. In July watch “Earth,” a half-hour feature program with CNN Special Correspondent Philippe Cousteau. Follow him on Twitter.

The shantytown in the northern reaches of capital Port-au-Prince is one of the countries poorest areas, blighted by poor sanitation and violence.

Planting a million trees a year

Shacks, on average, house nine people and around half the population earn less than $0.50 a day. It’s little wonder then that life expectancy isn’t much more than 50 years, according to the healthcare NGO, Haiti Clinic.

But one man is hoping to challenge this statistic, planting the seeds of a healthier future for the district’s 250,000 population by transforming a garbage dump into a vibrant urban garden.

“Growing up in Cite Soleil we have the situation where people think it’s somewhere nothing good can happen,” says local resident Daniel Tillias.

“But myself and some members of the community wanted to have something to turn it green and nothing could be better than a garden.”

The results are extraordinary. Jaden Tap Tap (Tap Tap Garden) covers half-an-acre and is the largest urban garden in the country.

Teeming with plants and people planting and picking them, the garden is hugely popular with locals.

“We grow about 20 different vegetables in the garden,” explains Tillias.

Founded in 2011, the garden has an abundance of vegetables and herbs: eggplants, peppers, chard, radishes, potatoes, parsley, basil. It’s a cornucopia of healthy green vegetables that rivals any community farm in the world.

“People get in mind that it’s not possible to garden in Haiti — the soil is no longer good, we don’t have water. But you see we have accomplished something really amazing,” says Tillias. 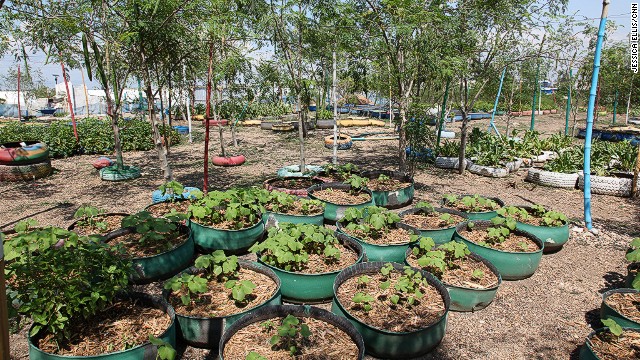 Myself and some members of the community wanted to have something to turn it green and nothing could be better than a garden.
Local resident Daniel Tillias

The bulk of the produce is used for the local soup kitchen providing much needed nutrition for the community. Whatever is left is sold at market.

It’s not just the plants which catch your eye, but also the recycled pots and containers.

Old tires, shoes, footballs are filled and planted. Even toilet bowls and old suitcases have been put to use.

“We use whatever we can find. The whole point is first we want the kids to feel connected with what seems like nothing much, because this is something that would just float in the canal. We say: ‘No! It could grow parsley,'” Tillias says.

“I want them to be able to eat, to make money out of the garden and to feel more peace through the garden. If I can see these three things happen, I would feel as if I had fulfilled my dream.”