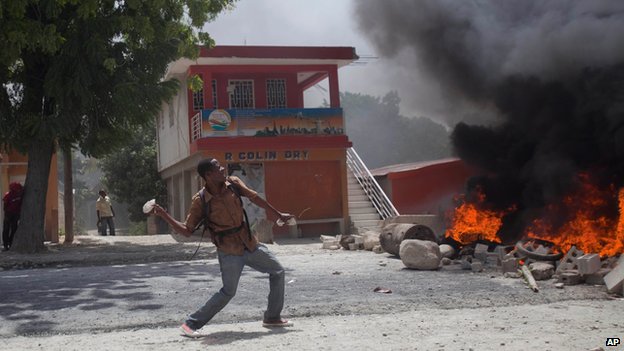 The protesters set up barricades of rocks and burning tyres

UN peacekeepers in Haiti have clashed with supporters of former President Jean-Bertrand Aristide in the Haitian capital, Port-au-Prince.

Dozens of Mr Aristide’s supporters had set up barricades outside his home, fearing he could be arrested.

Mr Aristide faces charges of money laundering, but his supporters say the investigation is politically motivated.

On Wednesday, a judge issued an arrest warrant for him after he failed to appear in court for questioning about the charges, which also include corruption and drug trafficking.

However, Mr Aristide’s lawyer said his client did not go to court because he did not receive the summons.

A crowd of demonstrators, said to number around 150, blocked the route to his home with rocks and burning tyres on Thursday to prevent his arrest. 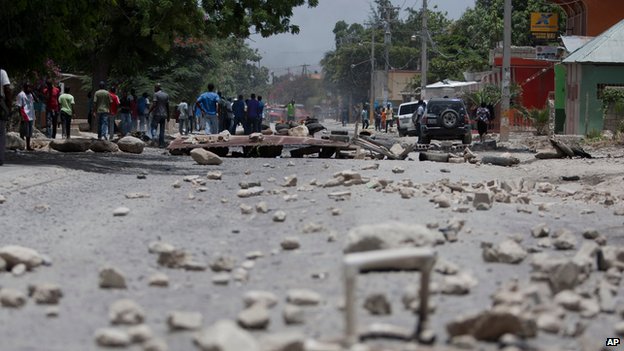 The crowd was dispersed by UN forces, who used smoke grenades 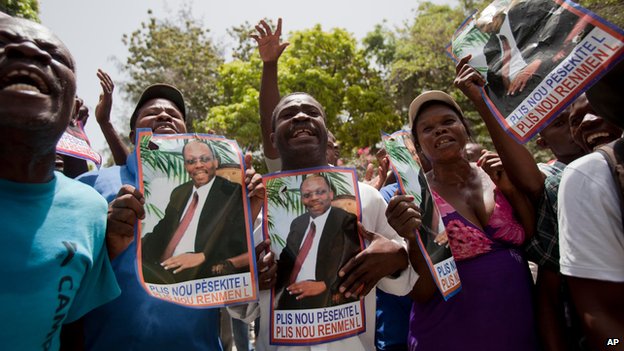 Some protesters threw stones at a car carrying UN personnel, forcing them to run to a nearby home.

“We can confirm that the UN security team rescued the two UN staff, and then peacekeeping troops cleared the protesters and their barricades, and retrieved the UN vehicle using smoke grenades and armoured vehicles,” a UN official told the BBC.

Correspondents say Mr Aristide is seen as a champion of the poor, and remains popular with many in Haiti.

He was Haiti’s first freely elected president in 200 years of independence, but was ousted following an uprising in 2004.

He spent seven years in exile in South Africa before returning to the country in 2011.

UN peacekeepers were deployed to restore order after the 2004 uprising, and more than 10,000 uniformed personnel remain on the ground.

The mission has drawn controversy, including allegations of excessive force.

QUOTE:“Mr Aristide faces charges of money laundering, but his supporters say the investigation is politically motivated.”

People expect this type of garbage from the American media, but not the BBC.

QUOTE: “Correspondents say Mr Aristide is seen as a champion of the poor, and remains popular with many in Haiti.”

The fact that Aristide could only draw 130 people to protest, in front of his residence, is an indication of his popularity. The Haitian people are not stupid. They understand that Aristide conned them over the years, while he stole millions and maintained a murderous chaos throughout the land.

Aristide has absolutely no interest in the poor!

QUOTE:”He was Haiti’s first freely elected president in 200 years of independence, but was ousted following an uprising in 2004.”

Aristide was not the first freely elected president. There were at least five before him, including Francois Duvalier, who won a landslide election.

Aristides’s first election was questioned when Port-au-Prince Mayor Evens Paul put the mob on the streets, as the illegal French embassy transmitter declared Aristide winner of the 1990 elections – at 11 AM on election day.

The polls were not to close until 6 PM.

The few who protested were necklaced – gas filled tires around the neck and lit with a wooden match.

Jimmy Carter, and Robert McNamara were in Haiti as observers, and questioned the process that morning. Evens Paul threatened their lives and this pair of dynamic, brave, American leaders, scurried to the airport, and out of the country, in Air Force Two.

Aristide was declared president with less than one half of one percent of the vote counted. This figure comes from a survey funded by Aristide, and then suppressed, when he saw the result.

Not a question of Freedom of the Press.

We need Responsibility of the Press!!

The reality sees Michel Martelly with something like 85% popularity in a nation where 54% of the voters are younger than 25. Most were not even born when Aristide was first elected.

These young people do not want a return to Aristide/Preval chaos. They want to give the Martelly/Lamothe team an opportunity to do something, right or wrong.