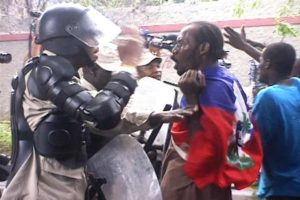 PORT-AU-PRINCE, Haiti — Haiti’s national police force is the best body for providing security in this poor nation and the government should concentrate on building up the force, a senior U.S. diplomat said Thursday.

Susan Rice, U.S. ambassador to the United Nations, commented on behalf of her U.N. Security Council colleagues as they wrapped up a four-day visit to meet with senior Haitian officials and view U.N. operations in Haiti.

The U.N. focus on strengthening the understaffed national police is almost certain to complicate President Michel Martelly’s push to restore Haiti’s army, which was disbanded in 1995 because of its involvement in coups and history of abuse.

The Haitian government, its international partners and the U.N. peacekeeping force “have invested in building the Haitian National Police as the body that can best provide daily protection for the Haitian people,” Rice said at a news conference. “The goal has been set to increase it in the next five, three to five years, to another 15,000, 16,000 and perhaps more beyond that.”

Rice said the U.N. peacekeeping force will remain focused on increasing officer levels, “because that is the institution that exists, that is under way and has the best prospect in the near term of being capable of playing the (security) role” shared by peacekeepers and Haitian police.

The United States, Canada and other countries have said Haiti should devote its limited resources to building the police force, which has just 8,000 officers in a country of 10 million people, and to rebuilding from the 2010 earthquake.

Martelly argues that a new army is needed to patrol borders and protect the environment.

The 15-member U.N. delegation visited the western port of Miragoane and the country’s second biggest city, Cap-Haitien. In the north, the diplomats toured an industrial park and, Rice said, a “tragically overcrowded” prison and an “underperforming” court.

On Thursday, the delegation went to a camp for people displaced by the earthquake and a hospital that houses a treatment center for cholera patients.

The news conference coincided with a small street protest outside the international airport. About 80 demonstrators accused United Nations operations in Haiti of causing more harm than good.

The U.N. mission and its peacekeepers have been blamed for introducing the cholera outbreak that has spread throughout Haiti and are also tied to allegations of abuse of children in the past year.

“We take very seriously any instances of sexual abuse, exploitation and violence, especially those committed by U.N. personnel,” Rice said. “They must and will be thoroughly investigated, and the perpetuators will be brought to justice.”

The U.N. set up the peacekeeping force in Haiti in 2004 to provide stability following the overthrow of then-President Jean-Bertrand Aristide. The mandate for the force of 11,000 soldiers will come up before the Security Council for renewal in October.