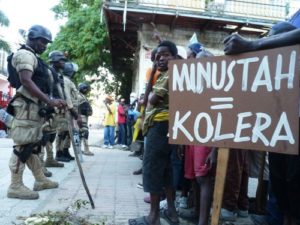 Earlier this week, UN Secretary General Ban Ki-Moon traveled to Haiti giving hope to the Haitian people and officials that the UN would issue a long overdue apology for their role in introducing the cholera epidemic in Haiti in the immediate aftermath of the devastating 2010 earthquake that claimed 320,000 lives. After the usual diplomatic rounds were made, Ban showed up an hour late to a scheduled press conference to meet with the Haitian press.  After having waited an hour – or more accurately four years since the beginning of the epidemic and the surfacing of the evidence implicating the UN – Ban took two questions: one from a Haitian journalist on cholera and another from an international reporter on Palestine. Haitian journalists were outraged at his blatant avoidance of questioning on this hot button issue.  It was a public relations disaster.
Al Jazeera video not available in the USA
The Nepalese UN mission in Haiti could be the source of the cholera deadly outbreak there. Al Jazeera’s Sebastian Walker reports from Haiti.
Since the outbreak, the UN has made every effort to cover up their negligence and direct involvement in the scandal.  Secretary Ban most recently felt the pressure to acknowledge the UN role when lawyers for the Haitian victims served him a subpoena in Manhattan on June 20. Since that time, he has been at pains to find the right words to address the issue. The Secretary’s strategy seems to hinge on dodging the issue and hoping it will go away.  But it has not — and will not – go away until the UN takes responsibility.
UN Special Envoy to Haiti, President Bill Clinton, has publiclyadmitted the role of the UN in introducing the epidemic that haskilled 8,000 and sickened more than 780,000.  The world’s most preeminent scientists and health officials have joined President Clinton in his conclusion. The US Center for Disease Controlconcluded based on the scientific evidence that the bacteria was not from Haiti but from South Asia. Since then more than two dozen scientific and academic institutions, including UCLA, Yaleand the American Society for Microbiology have shown conclusively that the UN Nepalese soldiers were responsible.
Under pressure from the Haitian people, the Haitian Government has been asking Secretary Ban to admit the UN moral responsibility in the spread of the epidemic since 2011. Haitian officials extended the normal diplomatic courtesies to the Secretary during this most recent trip, but were again internally disappointed and frustrated by the Secretary’s failure to address the issue in any meaningful way. President Martelly and Prime Minister Lamothe are wading in very sensitive political waters: domestically they are under extreme pressure from an enraged Haitian public to produce the elusive apology from the UN; and internationally they are reliant on foreign aid to provide even the basic needs of the country.
Far short of an apology, Secretary Ban said: “the UN has a moral responsibility to help Haiti combat the epidemic”. Haiti’s largest newspaper, the Nouvelliste, published an editorial outlining the popular belief that Ban made the trip to get some nice words and pictures on the record for his next report on Haiti to the UN Security Council. More cynical commentators have conjectured that the UN refusal to admit culpability for the epidemic is pure racism and another insult to the world’s first black republic. For others, the resistance is simply a financial and legal calculation. Haiti will need and estimated US$2.7 billion to eradicate the epidemic.
On October 2010, Nepalese soldiers from the UN Peacekeeping Mission in Haiti (MINUSTAH) carrying the cholera bacteria dumped their excrement into the Mirebalais River. That Mirebalais contamination spread to the Artibonite, the second most populated administrative region of Haiti. The epidemic spread from the Central Plateau to the Artibonite region and later to the entire country.
Foreign reporters investigated the outbreak finding it suspicious that the country had not seen cholera in more than 200 years.  They collected physical proof of the origin of the epidemic and published pictures of trucks discharging excrement from the UN Nepalese base into the Mirebalais River. Journalists actuallyfilmed the Nepalese soldiers frantically covering up the pipes that led directly from their latrines into a canal that connected directly to a tributary of the Artibonite River.
Covering up their role in this tragedy undermines the UN charter, the Universal Declaration of Human Rights, and everything they stand for. Fortunately, in this 24-hour news cycle, it is impossible to bury the facts. This bacterium took an immense toll on a country with scarce resources that were made even scarcer by one of the world’s most destructive earthquakes. To address this issue, the UN has offered a pitifully insufficient financial contribution, and it is barely meeting its goals.
Haitians believe in forgiveness and want good cooperation with the United Nations. But it is time for Secretary Ban to put aside the cover up strategy, acknowledge the facts and apologize to the Haitian people, particularly the victims. He needs to convene Haiti’s partners and multilateral institutions and develop a serious plan to help the Haitian government properly address and eradicate the epidemic and the victims thereof.
Le Respect est gagné, L’Honnêteté est appréciée, La Confiance est acquise et La Fidélité est retournée.
LE COURAGE DE COMBATTRE LES DEMAGOGUES DE DROITE ET DE GAUCHE , LE COURAGE DE DIRE LA VERITE!!! RC