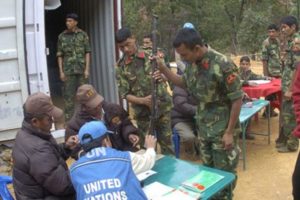 MIREBALAIS, Haiti (AP) — U.N. investigators took samples of foul-smelling waste trickling behind a Nepalese peacekeeping base toward an infected river system on Wednesday, following persistent accusations that excrement from the newly arrived unit caused the cholera epidemic that has sickened more than 4,000 people in the earthquake-ravaged nation.

Associated Press journalists who were visiting the base unannounced happened upon the investigators. Mission spokesman Vincenzo Pugliese confirmed after the visit that the military team was testing for cholera — the first public acknowledgment that the 12,000-member force is directly investigating allegations its base played a role in the outbreak.

Meanwhile the epidemic continued to spread, with cases confirmed in two new departments in Haiti’s north and northeast, said U.N. Office for the Coordination of Humanitarian Affairs spokeswoman Imogen Wall. At least 303 people have died and 4,722 been hospitalized.

International aid workers and the United Nations are focusing their efforts on stemming the spread of the outbreak, which was first noted on Oct. 20. But Haitians are increasingly turning their attention to its origins: How did a disease which has not been seen in Haiti since the early 20th century suddenly erupt in the countryside?

The mission strongly denies its base was a cause of the infection. Pugliese said civilian engineers collected samples from the base on Friday which tested negative for cholera and the mission’s military force commander ordered the additional tests to confirm. He said no members of the Nepalese battalion, whose current members arrived in early October for a six-month rotation, have the disease.

Local politicians including a powerful senator and the mayor of Mirebalais are pointing the finger at the Nepalese peacekeeping base, which is perched above a source of the Meille River, a tributary to the Artibonite River on Haiti’s central plateau. The Artibonite River has been the source of most infections, which remain concentrated in the rural area surrounding it — mostly down river from the mouth of the Meille.

“They are located exactly where the sickness started,” Mirebalais Mayor Laguerre Lochard, who is also running for Senate, told the AP. Area residents are also blaming the base; a young man walked by its gate laughing and chanting, “Co-co-cholera. Cholera MINUSTAH” — referring to the peacekeeping mission by its French initials.

Cholera is pandemic in much of the world but almost unheard of in the Western Hemisphere. It is endemic to Nepal, which suffered outbreaks this summer. A recent article in the Japanese Journal of Infectious Diseases about outbreaks in 2008-09 said the strain found by researchers was “Vibrio cholerae O1 Ogawa biotype El Tor.”

That is the same strain that has been identified in Haiti, epidemiologist Eric Mintz of the U.S. Centers for Disease Control and Prevention told the AP. But he cautioned that strain is common and description too general to be a “smoking gun” that would identify the strain’s country of origin.

The CDC is not directly investigating the base, spokesman David Daigle said.

The U.N. issued a statement on Tuesday defending the base. It said the Nepalese unit there uses seven sealed septic tanks built to U.S. Environmental Protection Agency standards, emptied every week by a private company to a landfill site a safe 820 feet (250 meters) from the river.

But those are not the conditions AP found on Wednesday.

A buried septic tank inside the fence was overflowing and the stench of excrement wafted in the air. Broken pipes jutting out from the back spewed liquid. One, positioned directly behind latrines, poured out a reeking black flow from frayed plastic pipe which dribbled down to the river where people were bathing.

The landfill sites, across the street, are a series of open pits uphill from family homes. Ducks swim and pigs wallow in pools of runoff. The pits abut a steep slope which heads straight down to the river, with visible signs where water has flowed during recent heavy rains.

The people who live nearby said both the on-base septic tank and the pits constantly overflow into the babbling stream where they bathe, drink and wash clothes.

“The water is no good at all. You shouldn’t wash in it,” said Jean-Paul Chery, a sand miner who lives near the human-waste pits with his wife and five children.

Lochard, the mayor, said he had told Nepalese officers not to place the landfill sites in that location but never received feedback from peacekeeping headquarters in Port-au-Prince.

Pugliese denied that the reeking black flows from the base were human waste, saying that the only liquid investigators was testing came from kitchens and showers. He said the pipes had only been exposed for the tests, though he could not explain why the liquid inside them was allowed to flow toward the river.

The samples were collected in mid-morning by uniformed military personnel, who scooped black liquid into clear jars with U.N. sky-blue lids. About a half hour later, as AP and Al Jazeera journalists stood by, the Nepalese troops began hacking around the septic tank with pickaxes and covered the exposed pipe jutting from behind the fence, but did not plug it.

Then tanker trucks from the contractor, Sanco Enterprises S.A., arrived to drain the septic tank and dump their contents across the street in the waste pits. As the septic tank drained, the flows behind the base stopped.

The waste company’s CEO, Marguerite Jean-Louis, declined to comment, citing her contract with the U.N.

3 thoughts on “UN probes Nepalese base as source of Haiti cholera outbreak WITHOUT HAITIAN-TRUTH.ORG REVELATION, THIS MIGHT NOT HAVE BEEN INVESTIGATED!!”