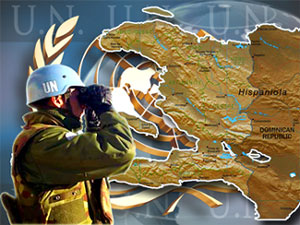 The peacekeeper, a member of the UN Stabilization Mission in Haiti (Minustah), was wounded Friday in the community of Acul, near the town of Petit-Goave, 68 kilometers southwest of the capital Port-au-Prince, as protesters demanding electricity service for their area clashed with the UN troops.

Local authorities said the peacekeeper, who was critically injured, belonged to the UN Police (Unpol) force, but they did not know his nationality.

In the same clash, the executive director of Haiti’s Employment Injury, Sickness and Maternity Insurance Office (Ofatma), Max Rudolph Saint-Albin, was also attacked by protesters, as were members of his security guards.

Saint-Albin was returning from an official trip to the area, when shots fired from the direction of the protests hit his vehicle.

During the protests, National Highway 2, linking the capital with the south of the country, was blocked for several hours and many drivers trapped at the site were also injured, media reports said, citing local officials.

Both local police officers and Minustah troops stationed in the area were deployed to quell the protests.

Minustah was established on June 1, 2004 by a UN Security Council resolution to help restore order in Haiti following the exile of then President Jean Bertrand Aristide.

The UN troops have come under fire on several occasions, leading to the death of a Canadian official in 2005.