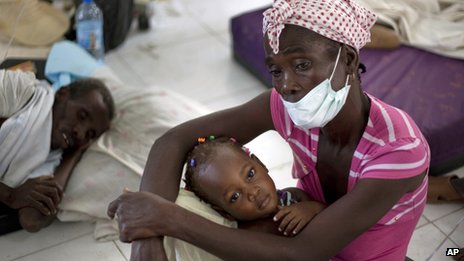 The epidemic has killed 8,000 people and many thousands have fallen sick
Continue reading the main story

UN efforts to tackle cholera in Haiti are “almost non-existent”, a charity says, as the world body faces court action for inadvertently starting a cholera epidemic in the country.

But Medecins Sans Frontieres says this has had almost no practical effect.

The UN is accused of negligently allowing peacekeeping soldiers to pollute Haiti’s water with cholera.

The epidemic, which is spread by infected sewage, has killed more than 8,000 people since late 2010.

“There have been grand plans – a 10-year $2.2bn project,” Duncan McClean, a senior manager for MSF, told the BBC.

But the UN plan had not been implemented, he added.

“I travel regularly to Haiti; the impact on the ground today is almost non-existent.”

The UN plan to improve drinking water and sewage outlets – which MSF says is unfulfilled – was widely seen as the international body’s attempt to deflect calls by the victims of cholera for financial compensation.

The multibillion dollar compensation claim is unprecedented in UN history.

The international organisation says it has legal immunity and has refused to comment further.

The UN says it has legal immunity from the compensation case; the mission in Haiti generally declines to comment on the matter – saying it is in the hands of UN lawyers.

The BBC has sought a UN comment on the MSF allegation about the failings of the UN cholera plan, but has not yet received one.

Lawyers for the cholera victims say that unless talks on compensation begin in the next few weeks, they will take the UN to court in New York.