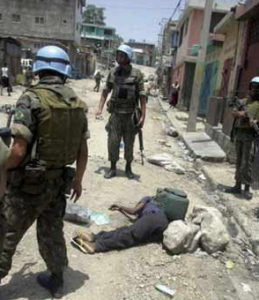 UNITED NATIONS — The United Nations’ top humanitarian relief coordinator has scolded his lieutenants for failing to adequately manage the relief effort in Haiti, saying that an uneven response in the month after the devastating Jan. 12 earthquake has undercut confidence in the world body’s ability to deliver vital assistance, according to a confidential e-mail.

The e-mail, which provides a rare and highly critical internal assessment of the massive U.N.-led relief effort, portrays an organization that is straining to set up enough shelters, latrines and other vital services for Haiti’s displaced population. It also warns that a failure of the U.N. system to improve relief assistance could result in political unrest and mass demonstrations.

The criticism from John Holmes, the head of the U.N. Office for the Coordination of Humanitarian Affairs, focuses on the United Nations’ sluggish implementation of its humanitarian “cluster strategy,” which assigns key U.N. relief agencies responsibility for coordinating the delivery of basic needs in 12 sectors, including water and shelter.

The cluster strategy has been developed in recent years to head off traditional conflicts between competing aid agencies that provided overlapping services. But it has been showing signs of strain.

A “lack of capacity has meant that several clusters have yet to establish a concise overview of needs and develop coherent response plans, strategies and gap analyses,” Holmes, who described himself as “disappointed,” wrote in the e-mail. “This is beginning to show and is leading others to doubt our ability to deliver.”

U.N. relief officials confirmed the authenticity of the e-mail, but Holmes’s office declined to comment on it.

Officials said that the U.N. World Food Program has fed 3.4 million Haitians and that more than 850,000 people get daily five-liter rations of water. More than 66,000 people have been employed under a U.N. cash-for-work program.

Holmes acknowledged that the relief community has “achieved a great deal in Haiti.”

Still, Chris de Bono, a spokesman for UNICEF, said the logistics of procuring material have been difficult. “It’s now in the pipeline, and it’s certainly a priority for us,” he added.

Holmes noted that Haiti will face heavy storms in the upcoming hurricane season. “This is a major test for all of us,” he wrote, “and we cannot afford to fail.”

Forget about the UN outside of Haiti.

MINUSTAH was conspicuous by its absence in the hours immediately following the January 12 quake.

In Leogane where over 90 percent of the structures were destroyed, thousands dead and injured, residents took some injured children to the local MINUSTAH camp, occupied from Sri Lankan troops.  This facility had a doctor, a small medical facility, and an ambulance.

(These were troops who replaced their countrymen who were sent home after admitting to raping a number of young girls and having sex with children.)

Well, the new guys are not much better flag-bearers for their nation.

Not only did they refuse, they fired over the Haitians heads to make a point. These MINUSTAH heroes then used a front-loader to gather bodies and then dumped these in a common grave. Several live Haitians were recovered from this project.

On the road between Port-au-Prince and St Marc there stands another MINUSTAH units, complete with doctor, medical facility and ambulance. People from the Mission of Hope, an American funded project, took injured to the MINUSTAH base and were forced away at gunpoint.

Some time after the January 12 quake, when 200,000 tents were required, a MINUSTAH official admitted there were only 3000 in country.

MINUSTAH is one huge and incompetent boondoggle from top to bottom.

In the past, some troops have been involved in the cocaine business and kidnapping. This probably continues.

They stand by when people are attacked. Have – on occasion – stood by while people were kidnapped from beside their armored cars….and shot innocent Haitians – captured on video. One of these events saw a Brazilian officer draw his pistol and shot a Haitian in the head…BANG!! The Haitian was doing nothing at the time – simply in the wrong place at the wrong time.

The fact that the UN has not managed their role in the Haitian quake disaster should come as a surprise to no one who is familiar with their record. Disappointed, but not surprised would be the better description.