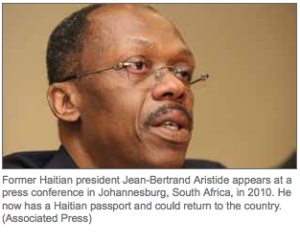 The United States warned former Haitian President Jean-Bertrand Aristide on Wednesday not to come back to Haiti ahead of next month’s presidential election, saying his return would distract voters already beset by crippling poverty and last year’s devastating earthquake as they choose a new leader.

State Department spokesman P.J. Crowley said the U.S. has no knowledge of Aristide’s travel plans, a day after the former priest’s American lawyer said he picked up a diplomatic passport for his client issued by Haitian government authorities.

Crowley stressed, however, that Aristide’s sudden re-emergence would disrupt the calm needed for the March 20 vote.

“We would be concerned if former President Aristide returns to Haiti before the election,” he told reporters in Washington. “It would prove to be an unfortunate distraction to the people of Haiti.”

Aristide, Haiti’s first democratically elected president, was ousted in a violent rebellion in 2004 and lives in exile in South Africa. He remains popular among many back home as a champion of the poor, but it is unclear if he might return.

Speculation that he might come back to Haiti soared after ex-dictator Jean-Claude “Baby Doc” Duvalier made a shocking return in January from nearly 25 years of exile. The focus quickly turned to Aristide, who said last month he was ready to return “today, tomorrow, at any time.”

Crowley said the U.S. “would hate to see any action that introduces divisiveness into this election process.”

And there already has been plenty of division in Haiti, which suffered a fraud-ridden, disorganized first-round election in November — the results of which were only confirmed last week when the electoral council eliminated President Rene Preval’s government-backed candidate, Jude Celestin.

Preval, a prime minister under Aristide, has said for years that Aristide could return under Haitian law but never said whether he would welcome back his political mentor. The issuing of the passport was seen as a significant reversal.

Aristide, a former priest, also has a long and complicated history with the United States, which helped re-install him as leader in 1994, three years after he was ousted in a military coup. But Aristide and his supporters say the U.S. then kidnapped him and flew him to Africa amid a revolt in 2004 during his second turn as president — a charge Washington denies.

Crowley declined to say whether the United States might support Aristide’s return to Haiti after the election, when the country’s political stability is re-established.

What he ultimately does, whether sooner or later, is a matter between former President Aristide and the government of Haiti,” he said.