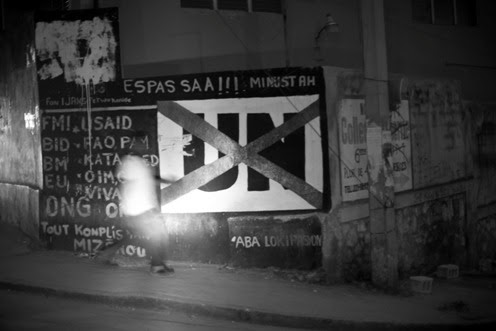 In this Sept. 27, 2015, supporters of presidential candidate Jean Henry Ceant attend his campaign rally in Port-au-Prince, Haiti. Practically every public office is up for grabs in this year’s unprecedented three-round balloting that is picking the next president, two-thirds of the Senate, the entire 119-member Chamber of Deputies and all local offices. The U.N. Security Council on Thursday approved a one-year extension of the Stabilization mission to last until after the presidential campaign and inauguration. Dieu Nalio Chery AP

United Nations Security Council members Thursday agreed to extend their stabilization mission in Haiti until next October, with that possibly being the final year of the blue-helmet peacekeeping force.

The one-year renewal with 2,370 troops and 2,601 police officers, and the eventual withdrawal, is being recommended by U.N. Secretary General Ban Ki-moon, who said Haiti remains on an “encouraging path” and “made significant strides towards the renewal of its democratic institutions with the holding of the first round of legislative elections” on Aug. 9.

“I anticipate that, if the recent positive trends continue, the nature of the United Nations presence in Haiti will evolve significantly,” Ban said.

The council approved his proposal to extend the stabilization mission until Oct. 15, 2016.

Ban, through his Special Representative Sandra Honoré, noted that an assessment of the mission’s presence and Haiti’s ability to care for its own security needs should be taken after the installation of its new president and government early next year. The country is scheduled to go to the polls on Oct. 25 in presidential elections. Runoffs for 12 senate seats and 86 lower chamber seats also will be held that day as well as balloting for mayors.

Security Council members welcomed the holding of the elections while also addressing the first round. While Peru and Argentina described the controversial Aug. 9 legislative vote as having taken place in “a peaceful environment,” Canada deplored the violence and called for Haitian authorities to investigate.

While members embraced Ban’s recommendations, they also cautioned against a hasty withdrawal and expressed concerns about the ability of the Haitian National Police to provide security.

“Despite the enhanced performance of the Haitian National Police in preventing crimes and controlling civil unrest, it is worth underlining that the institution has yet to reach the target of 15,000 officers by the end of 2016,” said Brazilian Ambassador Antonio de Aguiar Patriota. “Furthermore, only eight of the 70 goals of the HNP development plan 2012-2016 have been fully met.”

Ambassador Gustavo Meza-Cuadra Velásquez of Peru noted that HNP’s failure to meet the majority of its development goals has contributed to its inability to fully meet the security needs of the country and the continued need for U.N. presence.

During the Aug. 9 elections, police were accused of being passive as armed groups vandalized polling stations, stuffed ballots and intimidated voters. The country’s electoral council, under fire for the problems, has insisted that the police — and not the council — are responsible for security.

Members also called on the international community to remain involved in Haiti, where one noted that the country is currently facing a “triple threat,” with an ongoing migration crisis involving the Dominican Republic, a cholera outbreak and deepening hunger caused by an ongoing drought.