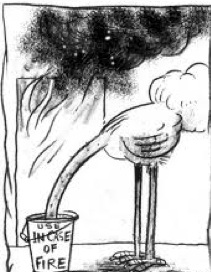 By Charanya Krishnaswami and Muneer I. Ahmad,

The mandate of the U.N. mission in Haiti includes ensuring “individual accountability for human rights abuses and redress for victims.” Yet instead of fulfilling its obligations to the roughly 600,000 Haitians affected by a cholera outbreak it caused, the United Nations is hiding, shamefully, behind a claim of immunity. By refusing to right its own wrong, the international body is violating the principles of international accountability and human rights that it purports to promote.

For all its challenges, Haiti was free of cholera for about a century before a U.N. peacekeeping force arrived from Nepal in October 2010. Although there had been an outbreak of cholera in Nepal shortly before the troops left for Haiti, the U.N. mission failed to appropriately screen the peacekeepers for the disease. This error was compounded by the United Nations’ failure to provide the peacekeeping mission adequate sanitation facilities at their base in the town of Mirebalais. As a result, cholera-infected waste leaked into a tributary to Haiti’s largest river, the Artibonite.Because many Haitians depend on the river for water, the spread of cholera was as rapid as it was deadly, killing more than 8,000 people, as of last month, and sickening hundreds of thousands of others.

Cholera continues to infect 1,500 people here every week. Community health advocates told us this week that patients lack access to care and simple life-saving supplies, thanks in part to continued U.N. inaction. Victims living steps away from the U.N. base — every one of whom has lost a relative, a friend or a neighbor in the outbreak — expressed their anger at the organization and their hopes to see it brought to justice.

Although a 2011 U.N. report conceded that the strains of cholera “isolated in Nepal and Haiti” were “a perfect match,” the United Nations denies responsibility for the outbreak. In November 2011, 5,000 victims of the disease, represented by the Institute for Justice and Democracy in Haiti, a Boston-based human rights group, and the Haitian Bureau des Avocats Internationaux, filed claims for compensation under the procedures the United Nations promised to create as part of its agreement for sending peacekeepers to Haiti. After ignoring the claims for more than a year, the United Nations announced in late February that they were “not receivable” because the 1946 Convention on Privileges and Immunities gave it legal immunity.

A U.N. spokesman said that the outbreak resulted from “a confluence of circumstances” and was “a painful reminder of Haiti’s vulnerability in the event of a national emergency” — the January 2010 earthquake. In other words, rather than providing its victims redress, the United Nations blames them.

The U.N. failure to acknowledge the Haitians’ claims is both immoral and illegal. International law requires the organization to provide a way for parties to bring claims against peacekeeping forces. The same convention the United Nations cites as bestowing legal immunity says that the organization must “make provisions for appropriate modes of settlement” for claims that arise from its missions. Simply put, if the United Nations harms innocent bystanders, it must give those people a way to obtain justice and seek compensation for their injuries.

The United Nations appeared to honor this obligation in 2004, when it entered into a status-of-forces agreement with Haiti that, among its provisions, required the U.N. mission to set up a commission to hear claims Haitians might have against U.N. peacekeeping forces. This is the claims process that victims of the epidemic tried to use in 2011. Yet in its statement last month, the United Nations made no mention of its obligation to establish a claims commission.

This is not the first time the United Nations has ignored its duty to establish a claims commission. Although it has signed about 50 similar peacekeeping agreements since 1990, not once has the United Nations set up a commission, a World Justice Project analysis noted last August.

This claims process is critical because the 1946 convention requires the United Nations to hold itself accountable when its peacekeepers do wrong. As then-Secretary General Kofi Annan explained in a series of reports to the U.N. General Assembly in the 1990s, the organization must be accountable when innocent parties are harmed by actions unnecessary to its mission. Leaking cholera-tainted human waste into a major waterway and consequently infecting hundreds of thousands of Haitians with a deadly disease not only undermined the U.N. mission in Haiti but also thwarted it.

Two years after cholera claimed its first victims in Haiti, the outbreak continues to ravage the Western Hemisphere’s poorest nation. By flouting its international obligations and its own promises, the United Nations has destroyed its moral credibility among Haitians. How can it purport to hold human rights abusers in Haiti accountable when it refuses to hold itself to the same standard?