PORT-AU-PRINCE, Haiti — International aid worker Emmett Fitz­gerald has to get 20,000 very poor people squatting in front of the National Palace to pack up their tarps and tin, their plastic buckets and soiled mats — to empty the most notorious camp in Haiti and go home.

The hard part: What home?

There is not enough money, there is not enough time to build the cities of tomorrow in Haiti today. So the 4,641 families that have been living for the past two years in the Champ de Mars park in downtown Port-au-Prince will be given $500 to return to the kind of desperate housing they lived in before the earthquake.

In Haiti, that is considered good news.

“We’re not talking about a house. We’re talking about renting a room, space on the floor, with a roof, access to water, a communal kitchen, maybe a toilet,” Fitzgerald said. As program coordinator for the International Organization for Migration, he is working alongside the Haitian government to clear the Champ de Mars camp, with a $20 million grant from the Canadian government.

If that sounds grim, the residents of Champ de Mars are the lucky ones. Given the magnitude of the housing crisis, combined with donor fatigue and lack of investment, the promise of constructing new public housing to absorb the homeless in Haiti has collided with reality. Most of the approximately 135,000 families still in camps will not be offered a shelter arrangement. Some camps will become “formalized” as permanent slums.

The displaced will mostly have to fend for themselves.

Why not allow the residents to remain in Champ de Mars? Because the tarp shanties are overcrowded fire hazards that will blow down in the first hurricane, the Haitian government says. There is no running water or electricity. There is another reason, too: The Champ de Mars camp is an embarrassment.

Two years after the world’s worst urban disaster in a generation, about 515,000 Haitians linger in 707 camps scattered across the capital. Although it is not unusual for refugees fleeing conflict to be stuck in camps for years, as Somali refugees in Kenya or Palestinians in Lebanon have been, rarely are people displaced by natural disasters for so long, and almost never in a camp in the central plaza of a capital city.

‘There is not a word for it’

Since the population in the earthquake camps in Haiti peaked at 1.5 million in July 2010, more than a million displaced persons have abandoned the tent cities. The vast majority left on their own, with little or no help. Some were shoved.

A report by Nicole Phillips of the University of San Francisco School of Law found it likely that many of the displaced persons who had left tent cities are now living in conditions worse than those found in the camps.

The International Organization for Migration counts 63,109 individuals forcibly evicted from 134 camps in the past two years and says 100,000 others are vulnerable to the same fate.

But where to go?

In Port-au-Prince, 84,866 buildings have been marked with red paint, indicating they should be demolished. Nonetheless, more than half of the red-marked houses are inhabited, with little or no repair, as people desperate for shelter live in the ruins. 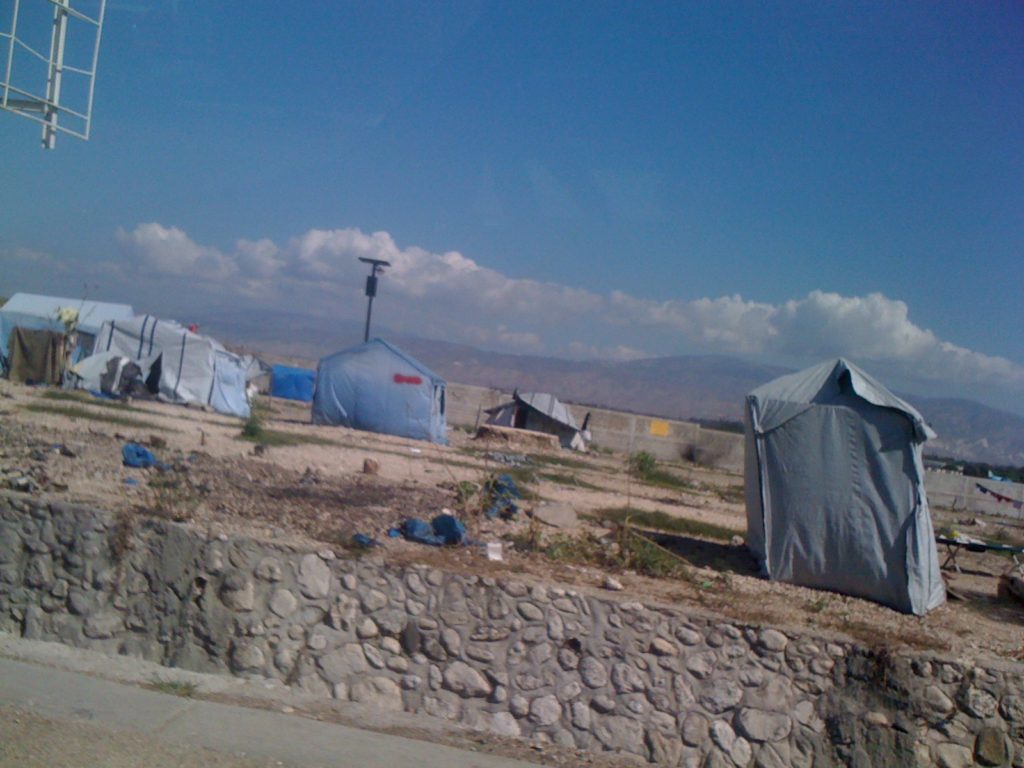 Inspectors with the Ministry of Public Works have also tagged 120,000 homes with yellow paint, meaning the structures are damaged but repairable. International donors, including the U.S. government, have helped renovate just 6,000 homes in two years.

At the current pace, it will take another decade to bring the yellow houses up to minimal safety codes.

“I cannot believe that we have lived here on the ground for two years,” said Williamson Aristide, who once worked at the airport handling cargo freight but has not had a real job since the earthquake on Jan. 12, 2010.

Asked about the prospects of finding a place to live, Aristide said: “There is not a word for it. It is very, very, very hard. There is nothing to rent.”

The “exemplar communities” of foam homes, geodesic domes and innovative Caribbean-style cabanas designed by world-class architects, promoted by the “Build Back Better” mantra of former president Bill Clinton and his Interim Haiti Recovery Commission, are on hold.

All the while, the camps are quickly deteriorating.

As of last month, there was no committed funding for emptying camp latrines, a risky gambit in a country facing a cholera epidemic. Almost all health services have been removed. U.N. peacekeepers are pulling back. The plastic tarps given to residents two years ago have a recommended life span of six months, and the temporary cities are in tatters.

“This is a dangerous place for a woman,” said Jasmine Charles, with a toddler on her hip. A man standing nearby said that the perimeter of the camp was relatively safe. “But go in deep? They will cut you and rob you, brother.”

All camps in Haiti are heartbreaking, but the Champ de Mars is the most visible, a monument to endurance and despair, in a public space as prominent in Port-au-Prince as the Mall in Washington.

In the predawn hours of Dec. 6, hundreds of aid workers stole into the sprawling camp and dashed from shanty to shack, waking those inside and asking for the head of the household, to award them a plastic ID bracelet.

Aid officials knew from experience that the population of the camp would double overnight if word got out that the international community was coming bearing gifts.

Now the 5,000 households must decide what they will do. There are three options. The vast majority — probably 90 percent of the camp — are renters. They can accept a $500 rental subsidy and find a place to live. Based on surveys of local real estate, that is enough money to rent a small space for a year.

If the family can get a better deal than $500, they keep the change. The international aid workers do not want to involve themselves as real estate brokers, as that would only send rents spiraling upward.

The families will also get $25 to move their household goods, and they will receive an additional $125 if they remain for two months in the space they rent.

The new model for emptying a camp is more carrot, less stick, but more Keynes than Kumbaya.

The most vulnerable 10 percent — single mothers, the elderly and infirm, those suffering psychological trauma — will get additional services.

To the few families in Champ de Mars who own their homes, the program will give $1,500 to repair a yellow house and $3,500 to demolish a red one and erect a “T-shelter,” of tarp and plywood, a kind of shack 2.0.

For Champ de Mars, something is better than nothing, but expectations are high.

Wildrick heard rumors that someone will build cement-block houses for the poor out in the dry cactus wastelands north of the capital. “We want one of those,” he said.

The second component is to revitalize the neighborhoods the camp residents might return to. The Canadian government is paying to reestablish 500 ­informal camp businesses, train 50 entrepreneurs, create 2,000 construction jobs for debris removal, and rebuild and repair damaged houses.

“If all we do is clear the Champ de Mars, we will have failed,” said Beverley J. Oda, minister of international cooperation for the government of Canada.

The successful emptying of Champ de Mars over the coming months would be a milestone for post-quake Haiti, a part of the promise that “Haiti is open for business,” and that the international community and nongovernmental organizations have not failed.

But the darker reality is this: The Haitian government is spending $30 million to empty six camps. There are 701 more. The Champ de Mars project will cost $20 million for 20,000 people. There would still be close to half a million displaced persons in camps. No country, no group of donor nations, no NGO is considering donating $500 million to Haiti to empty the camps.

The math does not work.