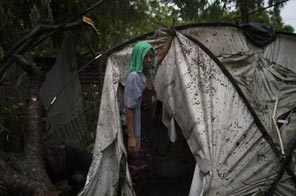 SAN JUAN, Puerto Rico – Rain from the outer bands of Tropical Storm Emily began falling Tuesday in Puerto Rico as the system moved on a track that would take it to the island of Hispaniola within 48 hours and possibly to Florida by the end of the week.

With the storm stalling south of Puerto Rico, most government offices closed and people cleared water and other emergency supplies from store shelves. The showers and wind gusts were sporadic and there were no reports of major flooding or injuries.

The storm was expected to bring up to 6 inches (15 centimeters) of rain in Puerto Rico, enough to trigger floods and mudslides to an island that is already saturated from months of heavy rain.

The storm was moving on a northwestern track that forecasters said would reach Hispaniola, the island shared by Haiti and the Dominican Republic, by Wednesday. Both countries, but especially Haiti, are prone to devastating floods.

Civil defense officials and the military in the Dominican Republic have already begun moving people out of high-risk zones ahead of the storm.

Forecasters at the National Hurricane Center said the storm was about 270 miles (435 kilometers) southeast of San Juan, Puerto Rico at 11 a.m. EDT (0900 GMT). It had been meandering, but the forecasters said they expected it to resume its westward path at about 12 mph (19 kph) later in the day.

A wind gust of 49 mph (80 kmh) was reported on St. Thomas in the U.S. Virgin Islands, the U.S. National Hurricane Center said.