Dorian could bring tropical storm conditions to the Leeward Islands Sunday and may approach the southeastern U.S. late next week.

A tropical system that moved off the coast of Africa last weekend became a tropical storm Wednesday and strengthened a bit Wednesday night into Thursday morning over the central Atlantic.

A slightly north of west path is forecast with Dorian through this weekend into early next week, most likely taking the center of feature just north of the Lesser Antilles. 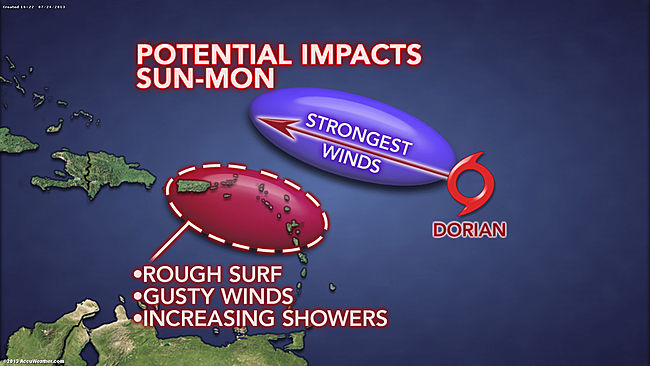 Conditions in the Leeward Islands this weekend will depend upon the exact path and strength of the tropical storm. There is a possibility of gusty, drenching squalls developing in the area Sunday into Monday, even if the system just misses to the north.

Many of the islands of the northern Caribbean have received above-average rainfall since April. San Juan, P.R., has received nearly 44 inches of rain since April 1. A tropical disturbance brought nearly 10 inches of rain to the area recently, during July 17-18, so a system bringing a dose of heavy rainfall would bring an elevated risk of flash flooding and mudslides.

According to AccuWeather.com Hurricane Expert Dan Kottlowski, “The vast area of dry air surrounding the system to start the week has diminished and would tend to favor strengthening during the middle of the week.”

At 8:00 a.m. EDT Wednesday, the system may have already been a tropical storm. Enhanced satellite images during the morning hours indicated a concentrated area of thunderstorms with some rotation.

At 10:30 a.m. EDT Wednesday, winds were officially estimated to be sustained at 50 mph near the center, and the system was named Dorian.

Official investigation by the National Hurricane Center will continue. Sustained winds must reach 74 mph for the system to be classified as a hurricane. 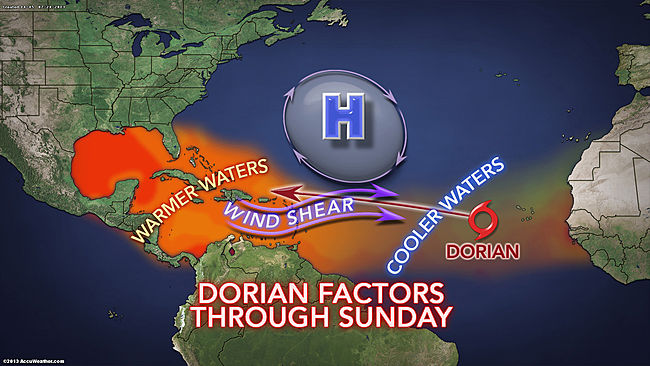 “Thursday into Friday, Dorian will move into a zone of cooler waters, which may cause the system to plateau or even weaken,” Kottlowski stated.

The path of Dorian next week will depend on the strength of the tropical system itself and other weather systems surrounding it. Currently, Dorian was moving swiftly along to the west-northwest at around 17 mph.

“It is too early to say with confidence for next week where Dorian will track and what the strength will be,” Kottlowski added.

It could be scooped up by the back side of high pressure near Bermuda over the Atlantic Ocean. In this scenario, the feature could then travel along the East coast of the United States.

In the middle of this wide window and a third scenario is for the system to reach the southeastern U.S. with drenching rainfall more than a week away from now, around the first weekend of August.

In addition to potential fringe-effect impact in the Lesser and Greater Antilles, people in the Bahamas and the Turks and Caicos should closely monitor the path and strength of Dorian. These areas are currently in a higher risk for the storm to pass very close by next week.