Tropical Storm Cristobal is expected to take shape this weekend, then impact the Atlantic beaches of the United States next week–even if the storm remains well offshore.

All interests along the U.S. eastern beaches, the Bahamas and Turks and Caicos islands should be keeping a close eye on the area of disturbed weather currently tracking northwest from Hispaniola.

On Sunday, this area will be in the vicinity of the southern Bahamas.

The development of a tropical depression or storm has failed to occur yet due to the obstacles of dusty air, disruptive wind shear and, more recently, interaction with the Caribbean Islands. 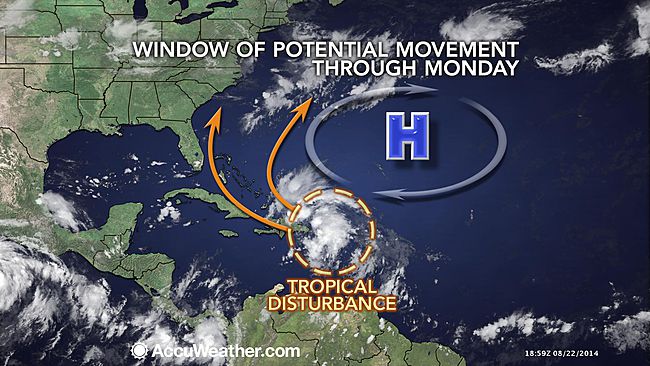 Regardless of when Cristobal takes shape, torrential downpours, gusty squalls and rough surf will continue to spread from Hispaniola and Puerto Rico to the Turks and Caicos and southern and central Bahamas this weekend. Some drenching showers and thunderstorms will even reach eastern Cuba.

“The downpours will raise the risk of flash flooding, road washouts and mudslides, but can also ease dry conditions on some of the islands,” stated AccuWeather.com Senior Meteorologist Alex Sosnowski.

Damaging winds will become an increasing concern over the Turks and Caicos and Bahamas as Cristobal takes shape. 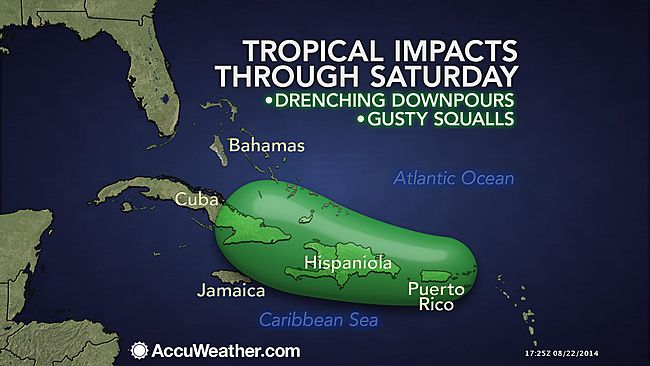 Beyond the weekend, what should be Cristobal is expected to be near or north of the central Bahamas on Monday, then will track parallel to the U.S. Southeast coast through midweek.

Kottlowski added that the disturbance should turn to the north and northeast before making a run at the Gulf of Mexico.

The window will be open for the evolving Cristobal to become a very strong tropical storm or hurricane as it tracks over the warm waters off the Southeast coast.

A dip in the jet stream dropping southward along the east coast of the U.S. will draw Cristobal northward through early next week. However, it may not totally sweep it out to sea. 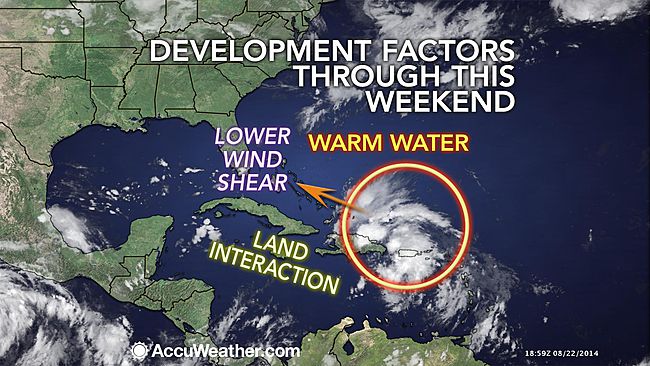 Cristobal would then ride along the western periphery of the Atlantic ridge of high pressure, off the Southeast coast, at midweek before likely getting steered away from the U.S. later in the week. The same dip in the jet stream set to erase the impending surge of warmth in the Northeast should work to protect the Northeast from Cristobal.

How close Cristobal comes to the southeastern U.S. will depend on how far west the ridge builds. Current indications point toward the U.S. escaping a landfall, but the storm may come close enough for the outermost showers to graze the beaches.

“Even if a tropical storm or hurricane was to stay east of the east coast of the U.S., a strong system would generate swells that propagate outward that could reach the shoreline in the form of rough surf and strong rip currents during the last week of August,” warned Sosnowski.

Beachgoers and operators of small craft trying to get in one last vacation before summer comes to a close would be at risk for such hazardous seas at the Southeast beaches during the early and middle part of the new week.

The danger will spread to the Northeast beaches later in the week.

The latest forecast thinking puts Cristobal on a track north of Bermuda. However, the potential for the storm to take a quicker turn to the northeast and take aim at Bermuda continues to be monitored.

While the Atlantic is coming to life, the eastern Pacific remains very active. Out of the three current storms, Marie is set to become a major hurricane before the weekend comes to a close.