By Jacqueline Charles
jcharles@miamiherald.com
PORT-AU-PRINCE
Breaking his silence, Jude Célestin said Friday he does not recognize Haiti’s preliminary presidential results that put him in a likely runoff with government-backed candidate and political newcomer Jovenel Moise
“These results do not reflect the vote of the people,” Célestin said at a news conference at his LAPEH party offices. “Everybody knows they committed fraud and just let it slide.”
Célestin’s criticism of the Oct. 25 preliminary presidential results that placed him second after Moise was joined by five other presidential candidates. They issued a joint statement denouncing the results as “anti-democratic” and called for the people’s vote to be respected.
“We don’t agree with what’s happened,” Célestin said.
The letter signals a possible budding coalition between Célestin, who was removed from the elections in 2010 in favor of President Michel Martelly amid allegations of irregularities, and the rest of the opposition should the results stand and he accepts to face off with Moise in a Dec. 27 presidential runoff.
Célestin conceded Friday that conversations are ongoing.
In another sign of candidates possibly joining forces, supporters of Célestin took to the streets and joined with those of former Sen. Moise Jean-Charles’ Pitit Dessalines party. The first to take to the streets, Pitit Dessalines members joined supporters of former President Jean-Bertrand Aristide’s Fanmi Lavalas’ party. Their presidential candidate, Dr. Maryse Narcisse, finished fourth behind Jean-Charles and also denounced the results during a news conference.
All of the protests, which were marred by rock-throwing and tire-burning, were broken up by police who fired tear gas and made some arrests. They also stopped and searched the vehicle of a former top government prosecutor, Claudy Gassant, who is a supporter of Jean-Charles.
“They have put in place a repressive force to break the people’s back,” said a defiant Célestin, calling on the people to remain mobilized. “They will not stop the population from mobilizing. They cannot because the population knows the real vote.”
Haiti observers say if Célestin joins the Lavalas and neo-Lavalas partisans, Martelly and his hand-picked successor, Moise, could be in for trouble. It would also be the first time in recent history that Haiti’s fractured opposition unites behind one candidate.
“The question is what does Jude Célestin really mean when he says he refuses to recognize the results and seeks their thorough re-examination? What does he do if the [Provisional Electoral Council] says ‘No’? Does he boycott the runoff and does he send his supporters to join the rest of the opposition in the streets to call for Jovenel Moise’s eviction from the electoral process?” said Robert Fatton, a Haiti expert at the University of Virginia. “Whatever may be Célestin’s real strategy, we are again entering an uncertain post-electoral crisis fraught with dangers of miscalculations on the part of all political actors. We can also be sure that PHTK will be determined to keep the provisional results from changing.”
PHTK candidate Moise continued to hail his victory Friday while dismissing the fraud allegation.
“No matter the vote, it will be the same result,” Moise said of his 32.8 percent finish, compared to 25.2 percent for Célestin. “We are asking everyone to stay calm.”
Under Haitian law, candidates have 72 hours from the publication of the results to contest the findings. As of Friday, no one had formally done so, Provisional Electoral Council President Pierre-Louis Opont said.
Opont defended the results, saying he has “full confidence” in the council’s work.
“Everyone has the right to contest,” he said, adding that they should be prepared to prove their votes.
Opont also noted that a quick count by the Organization of American States made similar predictions to what the council released.
The OAS results had Moise with 34.2 percent and Célestin at 22.5 percent.
But Célestin said the results are false and prove the doubts that many had about the council’s and tabulation centers’ ability to come up with accepted results. He again reiterated a call by him and other candidates, as well as human-rights and observers group, to name an independent five-member commission to provide deeper scrutiny for the fraud allegations.

Celestin met with President Martelly, before the election, to tell him he would accept no “run-off.”

He would only accept his personal victory.

Hardly a Democratic concept, even in Stalin’s Russia!

So, even before the October 25 vote, Celestin had stated his position, a position one might describe as being undemocratic. But no one has ever accused Celestin of being Democratic in politics, or his personal/business life.

When CNE chief, Robert Moreno, refused to sanction a major rape of the state construction office, Celestin had him murdered by Amaral Duclona. Celestin would then take over CNE, complete the crime, and share its proceeds with his cousin/partner Rene Preval.

He was also involved with Amarol Duclona’s murder of a French Consul, and a few others.

When the investigators got too close, he hid Duclona in Preval’s sister’s house while he – Celestin – obtained a false passport, in the name of Innocent. Celestin them smuggled Duclona into the Dominican Republic where he leased a condo for his contract killer. Funds were transferred to Duclona, by Celestin, via Western Union – of all things!!

These, and other character flaws, were the reasons the International Community had him removed from the 2010 ballot, as Preval plotted to steal that election.

At that time, Jude Celestin had a popularity of only 4.5% on the BRIDE polls. He and Mirlande Manigat were at the bottom of the list, competing for last place.
Preval was maneuvering to eliminate Jean-Henry Ceant and Charles Baker, in the first round – and he did!

Preval feared Ceant and Baker as potential Presidents who would arrest him- Preval – for his many crimes which involved, murder, kidnapping, drug smuggling, money laundering, and massive thefts – $198,000,000 from Petro Caraibe funds.

Celestin/Manigat were to provide his security blanket.

Fate would see Celestin forced off the ballot, leaving the truly unpopular Manigat against the truly popular Martelly.

Unfortunately, Celestin will not accept the truth.

Well now, perhaps Celestin does accept the truth that he can never win a free-and-fair ballot against Jovenel Moise.

Because of this, Jude Celestin must avoid the run-off, a run-off that will reveal the Truth for what it is.

Jude Celestin is a loud, violent, dangerous loser with little to offer Haiti’s future.
Time for the people to wake up and smell the roses. 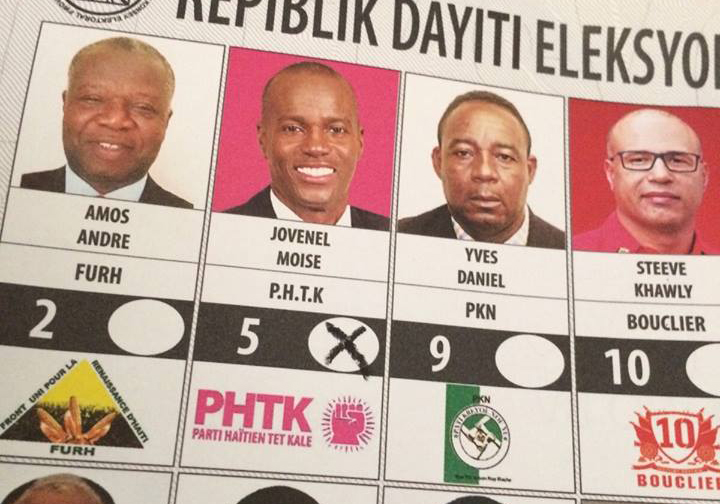