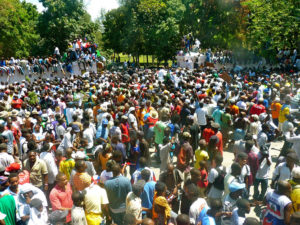 Thousands of revelers have poured into the downtown area of Haiti’s capital to kick off a three-day festival called the “Carnival of Flowers.”

The Haitian government held the main Carnival celebrations this year in the countryside, in large part because a public plaza in Port-au-Prince still housed thousands of people displaced by the 2010 earthquake.

It was the first time in memory Carnival was held outside Haiti’s capital.

The administration of President Michel Martelly wanted to hold Sunday’s celebration to mark the clearing of the park-turned-settlement and also let people in Port-au-Prince enjoy their own Carnival.

Some critics have questioned the wisdom of spending about $1.6 million on the event.

The government says that the celebration will boost morale and provide jobs.

Once again, with a few keystrokes, AP – Asociated Presss – delivers another false report on Haiti.

Thousands attend – makes people visualize a couple of thousand, not tens of thousands. A small turn out in front of the National Palace when, in fact, HUNDREDS OF THOUSANDS were there.

Like AP saying 1000 attended Aristide’s recent birthday celebrations when the number was 221 – counted from a photograph.

Haiti has suffered AP’s excesses – plus and minus, for years.

The suggestion that Carnival provides jobs is another lie – perpetuated by Martelly. This extravaganza was just another opportunity for his insiders to steal money. Spend a little – steal a lot is the motto.

Haiti deserves better from the media and President Martelly.

Live in hope. Die in despair.