Struck by gunfire, Martine Moïse lay bleeding as the assassins who killed her husband ransacked her room. Now, she says, the F.B.I. must find the mastermind behind the attack. 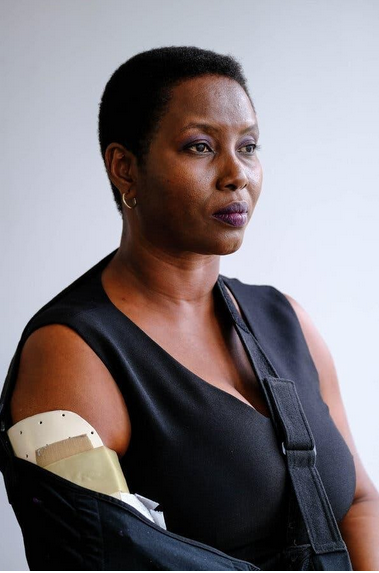 MIAMI — With her elbow shattered by gunfire and her mouth full of blood, the first lady of Haiti lay on the floor beside her bed, unable to breathe, as the assassins stormed the room.

“The only thing that I saw before they killed him were their boots,” Martine Moïse said of the moment her husband, President Jovenel Moïse of Haiti, was shot dead beside her. “Then I closed my eyes, and I didn’t see anything else.”

She listened as they ransacked the room, searching methodically for something in her husband’s files, she said. “‘That’s not it. That’s not it,’” she recalled them saying in Spanish, over and over. Then finally: “‘That’s it.’”

The killers filed out. One stepped on her feet. Another waved a flashlight in her eyes, apparently to check to see if she was still alive.

“When they left, they thought I was dead,” she said.

In her first interview since the president’s assassination on July 7, Mrs. Moïse, 47, described the searing pain of witnessing her husband, a man with whom she had shared 25 years, being killed in front of her. She did not want to relive the deafening gunfire, the walls and windows trembling, the terrifying certainty that her children would be killed, the horror of seeing her husband’s body, or how she fought to stand up after the killers left. “All that blood,” she said softly. 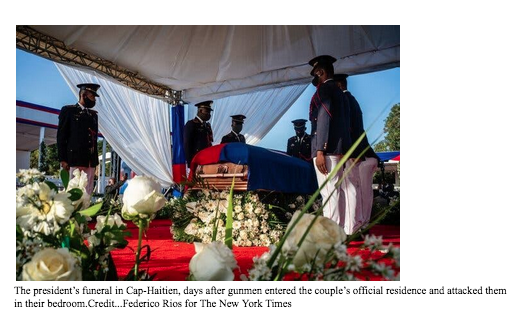 The president’s funeral in Cap-Haitien, days after gunmen entered the couple’s official residence and attacked them in their bedroom.Credit…Federico Rios for The New York Times

But she needed to speak, she said, because she did not believe that the investigation into his death had answered the central question tormenting her and countless Haitians: Who ordered and paid for the assassination of her husband?

The Haitian police have detained a wide array of people in connection with the killing, including 18 Colombians and several Haitians and Haitian Americans, and they are still seeking others. The suspects include retired Colombian commandos, a former judge, a security equipment salesman, a mortgage and insurance broker in Florida, and two commanders of the president’s security team. According to the Haitian police, the elaborate plot revolves around a 63-year-old doctor and pastor, Christian Emmanuel Sanon, who officials say conspired to hire the Colombian mercenaries to kill the president and seize political power. 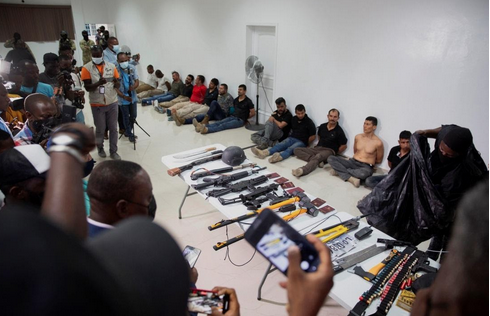 But critics of the government’s explanation say that none of the people named in the investigation had the means to finance the plot on their own. And Mrs. Moïse, like many Haitians, believes there must have been a mastermind behind them, giving the orders and supplying the money.

She wants to know what happened to the 30 to 50 men who were usually posted at her house whenever her husband was at home. None of his guards were killed or even wounded, she said. “I don’t understand how nobody was shot,” she said. 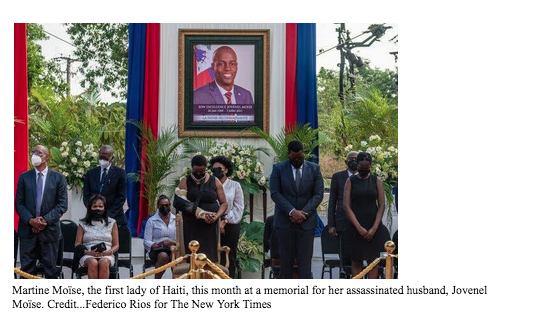 At the time of his death, Mr. Moïse, 53, had been in the throes of a political crisis. Protesters accused him of overstaying his term, of controlling local gangs and of ruling by decree as the nation’s institutions were being hollowed out.

Mr. Moïse was also locked in battle with some of the nation’s wealthy oligarchs, including the family that controlled the nation’s electrical grid. While many people described the president as an autocratic leader, Mrs. Moïse said her fellow citizens should remember him as a man who stood up to the rich and powerful.

And now she wants to know if one of them had him killed.

“Only the oligarchs and the system could kill him,” she said.

Dressed in black, with her arm — now limp and perhaps useless forever, she said — wrapped in a sling and bandages, Mrs. Moïse offered an interview in South Florida on the agreement that The New York Times not reveal her whereabouts. Flanked by her children, security guards, Haitian diplomats and other advisers, she barely spoke above a whisper.

She and her husband had been asleep when the sounds of gunfire jolted them to their feet, she recalled. Mrs. Moïse said she ran to wake her two children, both in their early 20s, and urged them to hide in a bathroom, the only room without windows. They huddled there with their dog.

Her husband grabbed his telephone and called for help. “I asked, ‘Honey, who did you phone?’” she said. 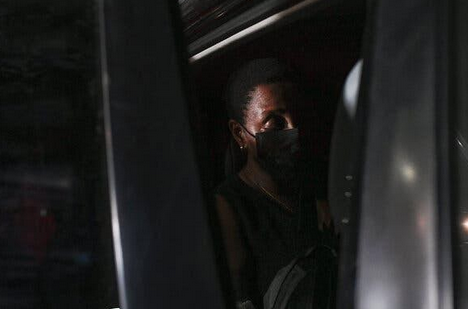 Mrs. Moïse said investigators have yet to answer the central question of the case: Who ordered and paid for the assassination of her husband?Credit…Matias Delacroix/Associated Press

“He said, ‘I found Dimitri Hérard; I found Jean Laguel Civil,’” she said, reciting the names of two top officials in charge of presidential security. “And they told me that they are coming.”

But the assassins entered the house swiftly, seemingly unencumbered, she said. Mr. Moïse told his wife to lie down on the floor so she would not get hurt.

“‘That’s where I think you will be safe,’” she recalled him saying.

It was the last thing he told her.

A burst of gunfire came through the room, she said, hitting her first. Struck in the hand and the elbow, she lay still on the floor, convinced that she, and everyone else in her family, had been killed.

None of the assassins spoke Creole or French, she said. The men spoke only Spanish, and communicated with someone on the phone as they searched the room. They seemed to find what they wanted on a shelf where her husband kept his files.

“They were looking for something in the room, and they found it,” Mrs. Moïse said.

She said she did not know what it was.

“At this moment, I felt that I was suffocating because there was blood in my mouth and I couldn’t breathe,” she said. “In my mind, everybody was dead, because if the president could die, everybody else could have died too.” 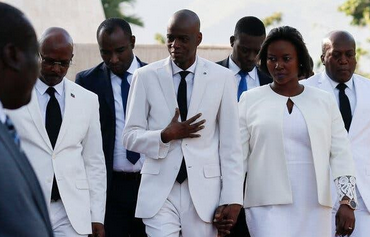 The men her husband had called for help, she said — the officials entrusted with his security — are now in Haitian custody.

And while she expressed satisfaction that a number of the accused conspirators have been detained, she is by no means satisfied. Mrs. Moïse wants international law enforcement agencies like the F.B.I., which searched homes in Florida this week as part of the investigation, to track the money that financed the killing. The Colombian mercenaries who were arrested, she said, did not come to Haiti to “play hide and seek,” and she wants to know who paid for it all.

In a statement on Friday, the F.B.I. said it “remains committed to working alongside our international partners to administer justice.”

Mrs. Moïse expected the money to trace back to wealthy oligarchs in Haiti, whose livelihoods were disrupted by her husband’s attacks on their lucrative contracts, she said.

Mrs. Moïse cited a powerful Haitian businessman who has wanted to run for president, Reginald Boulos, as someone who had something to gain from her husband’s death, though she stopped short of accusing him of ordering the assassination. 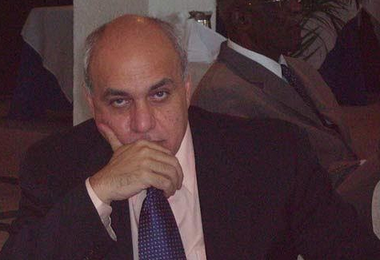 Mr. Boulos and his businesses have been at the center of a barrage of legal cases brought by the Haitian government, which is investigating allegations of a preferential loan obtained from the state pension fund. Mr. Boulos’ bank accounts were frozen before Mr. Moïse’s death, and they were released to him immediately after he died, Mrs. Moïse said. 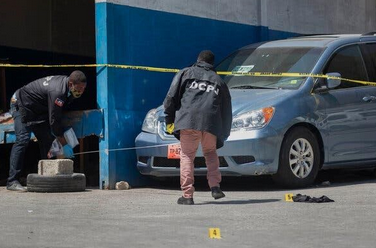 In an interview, Mr. Boulos said that only his personal accounts, with less than $30,000, had been blocked, and he stressed that a judge had ordered the release of the money this week, after he took the Haitian government to court. He insisted that, far from being involved in the killing, his political career was actually better off with Mr. Moïse alive — because denouncing the president was such a pivotal part of Mr. Boulos’s platform.

Mrs. Moïse said she wants the killers to know she is not scared of them. 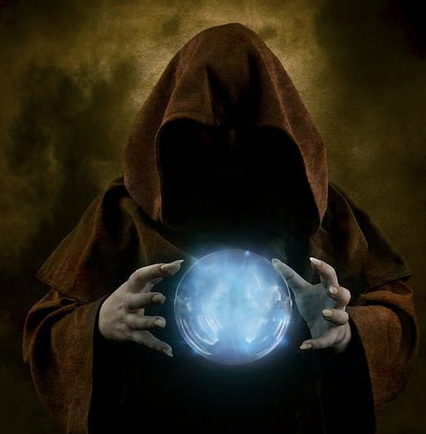 “I would like people who did this to be caught, otherwise they will kill every single president who takes power,” she said. “They did it once. They will do it again.”

She said she is seriously considering a run for the presidency, once she undergoes more surgeries on her wounded arm. She has already had two surgeries, and doctors now plan to implant nerves from her feet in her arm, she said. She may never regain use of her right arm, she said, and can move only two fingers.

“President Jovenel had a vision,” she said, “and we Haitians are not going to let that die.” 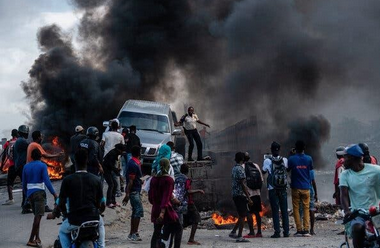 Protests and riots erupted the day before the president’s funeral.  Credit…Federico Rios for The New York Times