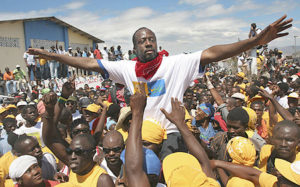 Western Union’s relationship with Wyclef will be multi-faceted and will include outreach through social media, grassroots events and consumer promotions in the U.S.

To kick-off Western Union’s “Random Acts of Giving” holiday campaign, Western Union, through its corporate signature program Our World, Our Family(R), also announced at its U.S. flagship store in Times Square, a $225,000 donation to Wyclef’s charitable organization, Yéle Haiti www.yele.org, to support education projects in his native country of Haiti.

Adding to this year’s holiday theme of “Random Acts of Giving,” Western Union is hosting a free ‘Lunchtime Jam Session’ featuring Wyclef and approximately 2,000 New Yorkers at the Nokia Theater in Times Square on November 9, 2009. The company and Wyclef also plan to distribute, to consumers in the U.S., prepaid gift cards totaling approximately $250,000 to help celebrate the spirit of giving this holiday season.

“Through this relationship, Western Union and I hope to inspire people to lend a helping hand and do a Random Act of Giving this holiday season, whether it’s sending money to family and friends or donating time to a charity or cause.”

Stewart A. Stockdale, Executive Vice President and President, The Americas for Western Union, added, “Wyclef’s resounding success in music and philanthropy have made him an icon worldwide. He relates to our brand and is the ideal ambassador to help amplify our message to new consumers with a need to move money around the corner, or the world.

“Through this relationship, we hope to harness Wyclef’s star power to bring the Western Union brand to every home in America and at the same time support social causes both Wyclef Jean and Western Union strongly believe in and support.

Wyclef Jean has numerous music projects he is working on including a mixtape EP set to release on November 10, 2009, entitled DJ Drama Presents Wyclef Jean AKA Toussaint St. Jean “From the Hut, To the Projects, To the Mansion” (Carnival House / MegaForce / RED / Sony Music) and his seventh solo LP entitled “Wyclef Jean” (Carnival House / Columbia / Sony Music) is set to release in March 2010.

To learn more about Wyclef Jean please go to: