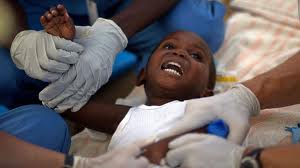 IT IS now all but certain that Haiti’s cholera epidemic, which has killed more than 8,000 people and sickened more than 600,000, is directly traceable to a battalion of U.N. peacekeeperswho arrived in the country after the 2010 earthquake. The United Nations and its peacekeepers have done immeasurable good in Haiti and elsewhere, but in this instance they bear responsibility for unleashing one of the world’s most devastating recent epidemics.

The peacekeepers, from Nepal, where cholera is endemic, established their base on the banks of a tributary that feeds one of Haiti’s main sources of drinking water, the Artibonite River. Owing to the base’s slapdash sanitation system — drainage sites containing human feces that flooded and overflowed in the rain — waste water flowed into the tributary and contaminated the river.

In a country where no cases of cholera had been recorded in more than 150 years, the disease spread so fast that within nine months of the battalion’s arrival in late 2010, the number of cholera-infected Haitians surpassed all recorded cholera infections in the rest of the world combined. Hundreds more will continue to die annually for years to come in a nation whose anemic health, hygiene and sanitation infrastructure is no match for the ravages of a water-borne disease.

A report from researchers at the Yale School of Public Health and Yale Law School details the convincing epidemiological evidence, as well as the United Nations’ stubborn disavowal of responsibility. Initially, a panel of independent experts enlisted by the United Nations said that the evidence pointing to the peacekeepers was mainly circumstantial. Now the experts have reversed themselves, saying that the Nepalese peacekeepers were “most likely” the cause of the epidemic. Still, the United Nations refuses to accept legal, financial or moral responsibility.

Until now, the United Nations has asserted and enjoyed what amounts to blanket immunity from claims arising from its peacekeepers’ actions. There is a basis in law and logic for its stance. Given the range of nations, conflicts, disasters and chaotic environments in which U.N. personnel are deployed, the institution needs some protection from lawsuits and other claims for damages arising from its operations. Otherwise, it might never enter a risky place, thereby rendering itself useless.

Still, immunity in the courts, which the United Nations has enjoyed, does not justify a policy of institutional indifference. In the case of Haiti’s epidemic, U.N. officials have a moral obligation to right a wrong that has killed thousands.

That obligation goes beyond the legally tangled question of paying reparations to thousands of potential claimants in Haiti and the obvious need to ensure that U.N. installations and contractors meet higher standards of hygiene and sanitation. It involves the United Nations and its major donors, including the United States, adding resources to help Haiti build lasting improvements to its feeble public health system.

Haiti needs sewage treatment plants and municipal water facilities, as well as an effective primary health-care system accessible to people in rural areas as well as towns. Through UNICEF and the Pan American Health Organization, the United Nations should redouble its efforts to establish modern infrastructure in a country where 90 percent of the population lacks running water.

That’s not just part of the United Nations’ mission. It’s a matter of accountability and responsibility.

There may have been slap-dash sanitary systems, but Al Jazeera (Britain) photographed the Nepalese dumping raw shit into the river. There can be no doubt that this irresponsible act was the cause of the cholera outbreak.

MINUSTAH acts without responsibility in Haiti.

It is, in effect, an occupying force responsible to no one, with immunity for all crimes.

The Sri Lankins  had 103 soldiers tossed out for sexual crimes and child abuse. These would have seen them jailed for 20 years in the States. Instead, they were hailed as heroes when they arrived home.

Uruguayan salors at Port Salut raped a young boy, Johny Jean. His family tried to report this and the MINUSTAH authorities said there was no proof. Then a video was found, taped by one of the attackers. It showed a violent, sadistic attack on the young man by 5 sailors.

A team of American attornies came to Haiti, led by Ed Marger, Congressman Bob Barr and Mike Puglise. The Uruguayan sent his military commender to meet them and personally apologized for the crime, promising to compensate Johny Jean and his family, who were suffering death threats from the Uruguayan detachment. Finally Ed Marger and Mike Puglise flew to Uruguay, with Johny Jean and his mother, for a court appearance.

The upshot of this, Zero! The sailors were slapped on the wrist and Johny Jean got nothing.

The Uruguayan president’s personal word was worth nothing.

His unit at Port Salut continues it business of smuggling cocaine into the country with its boats. At one time they had a helicopter which made things more efficient.

At some stage the government of Haiti must stand up and make demands.

Until the Martelly/Lamothe team continues the acceptance of poor treament by MINUSTAH there will be no resolution of the problems.

After all, MINUSTAH is really a big guest in Haiti.