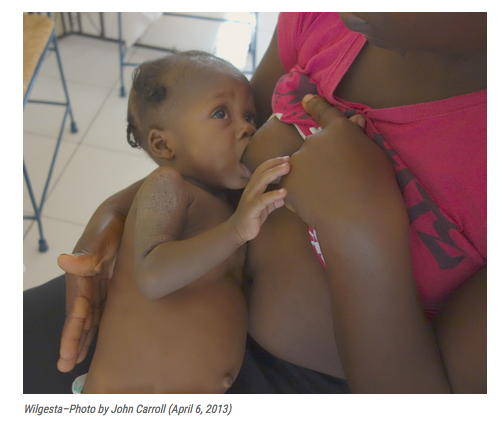 (This article was written in 2014 but was never posted-  blogs.pjstar.com)

I want to tell you about an eighteen-month-old baby girl named Wilgesta who was rejected this past week for heart surgery.
Wilgesta is an 18-month-old toddler in Haiti who was born with a hole in the ventricular wall of her heart which is called a ventricular septal defect. It is the most common congenital heart disorder and she needs heart surgery to repair the hole.
I first examined Wilgesta in Haiti in May 2013 and documented her condition and needs in a post in Dispatches from Haiti.
In a recent book “In the Company of the Poor” by Paul Farmer and Gustavo Gutierrez, they emphasize liberation theology and the “preferential option for the poor”. Guttierrez is considered one of the founders of liberation theology and Paul Farmer states that Gutierrez was one of his mentors regarding Farmer’s approach providing medical care for the poor.
Farmer describes Gutierrez’s work and describes how it influenced him in establishing clinics and hospitals in Haiti and other developing countries. Farmer wryly states that diseases such as tuberculosis and malaria make a preferential option for the poor.
Farmer also writes about “cost effectiveness” of medical interventions. And he describes the “house of no” referring to public health systems that determine who should be treated and who should not based on the premise of money. Farmer speaks about the big ‘house of no” pertaining to public health systems in the world that deem which disease is treated and which disease is not. And what is cost effective and what is not cost effective.  And by determining these factors, public health systems determine who is treated and who is not. They also determine who lives and who dies. Tens of millions of young people died in the last two decades because they did not receive treatment of treatable diseases from the house of no.
And that brings us back to the rejection of a baby named Wilgesta.
Wilgesta comes from a very poor family living in the mountains above Port-au-Prince. Her mother first brought her to me in May 2013. She had been to many other “health centers” with Wilgesta to no avail and she showed me all the scraps of papers and receipts from these centers which she carried in a black garbage bag. It left me with no doubt that mother was trying very hard to save her daughter who, according to her, “has made a slave out of me”.
When I examined a very scared and sick appearing Wilgesta who was clinging to her mother, I could hear a loud coarse-sounding heart murmur. Wilgesta had had many episodes of pneumonia and I advised her mother to take her to a children’s hospital in Port-au-Prince. Mother did this and Wilgesta was treated for pneumonia and had an echocardiogram. The echo showed the hole in her heart and the blood flowing in the wrong direction. Wilgesta needed heart surgery which cannot easily be obtained in Haiti unless a visiting group of heart surgeons come to Haiti and operate here.
Over the last few months, we found a medical center in the States who said they would review her echocardiogram. So I sent the echocardiogram, the chest X-ray, the history and physical, and a picture of Wilgesta, and offered the medical center 10,000 dollars to treat Wilgesta. After months of waiting, the children’s medical center rejected her stating that they had no further funds for international children. The house of no and its gatekeepers rejected Wilgesta.
They also stated that there was no urgency to get this surgery done. In my opinion, there WAS an urgency for Wilgesta. The urgency of Haiti was not factored into the calculus. She is not thriving, has had multiple episodes of pneumonia, and lives in dire poverty. She won’t last long if we don’t do something. They did not see Wilgesta like I did and like her mom did. If Wilgesta were my daughter she would be an emergency. The house of no does not recognize that the poor have emergencies too.
This children’s hospital that rejected Wilgesta did not offer their services for Wilgesta for 2014 or beyond. And they did not offer to contact any other children’s hospital to see if any could help out. They offered no collaboration whatsoever. They just said no they could not do it.
Searching for hospitals to repair kids hearts is a cold and lonely experience. Hospital administrators and heart surgeons don’t like to ask their colleagues spread across the United States and North America to operate on a poor little girl for free. But they should. Hospital gatekeepers don’t have to face Wilgesta’s mother and tell her that they will not save her daughter’s life. That is my job.
This is scandalous when we have the technology to save this little girls life in the half an hour it takes to sew the patch over the hole in her heart. And when we talk about cost-effective we have to ask–Cost effective for who? This simple heart surgery would be cost-effective and life-saving for Wilgesta.
So here we are. This house of no made no preferential option for Wilgesta. So we need to start over. We need to find a “house of yes” for Wilgesta.
(I contacted Haiti Cardiac Alliance in 2014 and they screened Wilgesta in Port-au-Prince. She was deemed a surgical candidate and in early 2015 she and her mother flew on the Digicel private jet to the Cayman Islands where Wilgesta had successful heart surgery.)
John A. Carroll, MD
www.haitianhearts.org