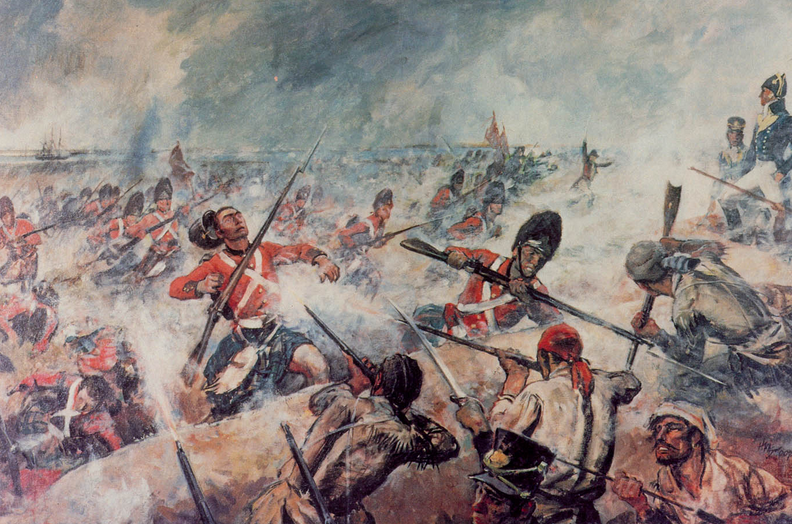 On Oct. 9, 1779, more than 500 Haitian soldiers (referred to as “Les Chasseurs-Volontaires de Saint-Domingue”) fought alongside French troops to aid the Americans in trying to force the British out of Savannah, Georgia, in order to open its port for the colonists’ use. The attack was unsuccessful, but it has been noted that the Haitians played a significant role in providing cover for the French soldiers who had to retreat from their positions on the battlefield. Even though Haitians shed blood for American independence, the United States in its foreign policy has always held a deep-seated hostility towards Haiti, despite statements to the contrary.

Haiti was born of a slave revolt that began on the French half of the island of Hispaniola and resulted in a revolution costing 200,000 Black lives.

When in 1804 Haitians threw off the French yoke of oppression to become the independent Republic of Haiti, France demanded recompense for the loss of its slaves. This demand for payment was backed up by the threat of an invasion, with the French navy laying off the Haitian coast. This forced payment, totaling more than $21 billion over the years, began Haiti’s descent from being France’s wealthiest colony to one of the poorest nations in the Western Hemisphere.

When Haiti gained its independence, Southern slaveholders in the United States were horrified by the liberation of enslaved Black people by their own efforts. In response, the U.S. government did not recognize the Black nation until 1862, when the United States was in the throes of its own brutal and bloody war over the perpetuation of slavery and the Southern states had seceded from the Union.

But recognition never meant respect. Ever since its creation, Haiti has had to battle American hostility, with the United States keeping its heel on Haiti’s economy and domestic politics – including a U.S. invasion in 1914 that precipitated a military occupation lasting until 1934.

The U.S. military occupied Haiti again in 1994, the year Haiti’s democratically elected president, Jean-Bertrand Aristide, returned from exile after fleeing from a coup by the Haitian military. When Aristide was re-elected in 2000, the U.S. military, in combination with the Haitian military, forcibly removed him from the country and sent him into exile again, this time in South Africa.

When Haiti gained its independence, Southern slaveholders in the United States were horrified by the liberation of enslaved Black people by their own efforts.

It is important to point out the irony of how badly the United States has treated Haiti, given the presence of a statue standing in Savannah’s Franklin Square. This statue was erected in 2007 to honor the Haitian soldiers that came to the aid of American revolutionaries 240 years ago in 1779.

This statue is not the first recognition of America’s debt to Haitians. In April 1944, President Franklin D. Roosevelt had Secretary of State Cordell Hull deliver a commemorative plaque to a cathedral in Haiti that reads, “Today we pay tribute to the courage and spirit of those Haitian Volunteers who in 1779 risked their lives for the cause of American Liberty.” The placement of Roosevelt’s plaque and the assistance given by the Haitians is unknown to most Americans. Even a 10-foot monument standing in a busy downtown square of a major U.S. city does not bring this piece of our history to our attention.

Haiti’s contributions to the United States are not widely known because throughout our country’s history America has shown itself to be hostile towards Haiti and Haitians.

On Oct. 30, 2018, British newspaper The Guardian ran the headline “Flee or hide: Haitian immigrants face difficult decisions under Trump.” This headline, curious to most Americans, has a backstory. After a 7.1 magnitude earthquake hit Haiti in 2010, the U.S. government offered Temporary Protected Status (TPS) to thousands of Haitians whose lives had been destroyed. But now, Donald J. Trump has decided that their imminent deportation is best for America. Haitians who have made new lives in this country are now on the verge of becoming “illegal aliens” by the stroke of Trump’s pen.

A monster like Trump has neither empathy for nor any sense of obligation to people of color whose ancestors helped to birth and build this nation. People of color can expect no consideration from this despicable, disgusting bully who wants to “make America white again.”

The White House is also planning to terminate TPS for people of color from other countries whose conditions have necessitated our compassion and offers of refuge, because hostility towards Haitians is simply a part of the pattern of widespread American hostility towards people of color. Just as ancient barbaric people created narratives that gave animals human form and characteristics in an anthropomorphic attempt to conform them to the familiar, Trump and his supporters are pursuing a europomorphic attempt to mold America into a European form that is familiar to them.

It is up to right-thinking Americans to stand up to Trump and the cynical, cowardly senators and congressional representatives who cater to his attempts at despotism. It is time to stand up and say “No!” to the deportation of Haitians and others living in the United States with Temporary Protected Status.

We must have compassion for our fellow human beings, even if the disgusting tenant in the White House does not.

Oscar H. Blayton is a former Marine Corps combat pilot and human rights activist who practices law in Virginia, having earned his law degree at Yale in 1977. He can be reached at oblayton1@gmail.com.