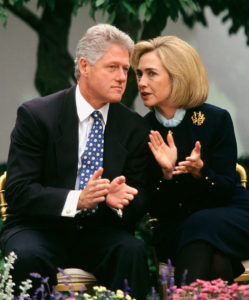 The family still doesn’t know how to wield its own power.

It’s hard to find anyone these days who looks back on the U.S.-led response to the January 12, 2010, Haiti earthquake as a success, but it wasn’t always that way. Right after the disaster, even as neighborhoods lay in rubble, their people sweltering under tarps, the consensus—outside Haiti—was that America’s “compassionate invasion” (as TIME Magazine called it) had been “largely a success” (Los Angeles Times), offering further proof that “in critical moments of the history of mankind … the United States is, in fact, the indispensable nation” (Expresso, Portugal).

As the latest release of Hillary Clinton’s personal emails by the U.S. State Department Monday revealed, that perception was not an accident. “We waged a very successful campaign against the negative stories concerning our involvement in Haiti,” Judith McHale, the under-secretary of state for public diplomacy and public affairs, wrote on February 26, 2010. A few weeks before, the public affairs chief had emailed newspaper quotations praising U.S. efforts in Haiti to Secretary Clinton with the note “Our Posts at work.” Clinton applauded. “That’s the result of your leadership and a new model of engagement w our own people,” she replied. “Onward!”

But one person even closer to the secretary of state was singing a different tune—very, very quietly. On February 22, after a four-day visit to the quake zone, Chelsea Clinton authored a seven-page memo which she addressed to “Dad, Mom,” and copied their chief aides. That informal report tells a continuing story of the unique brands of power and intelligence wielded by the Clinton family in Haiti and around the world—and of the uniquely Clinton ways they often undermine themselves.

First off, there was the secrecy. The memo—by a Clinton, with a master’s in public health from Columbia University, pursuing a doctorate in international relations from Oxford and with a prominent role at her family’s foundation—would have obliterated the public narrative of helpful outsiders saving grateful earthquake survivors that her mother’s State Department was working so hard to promote. Instead, like so much of the inner workings of the Clintons’ vast network, it was kept secret, released only in an ongoing dump of some 35,000 emails from Hillary’s private server, in response to a Freedom of Information Act Lawsuit wrapped up in the politics of the 2016 presidential election.

Chelsea Clinton was blunt in her report, confident the recipients would respect her request in the memo’s introduction to remain an “invisible soldier.” She had first come to the quake zone six days after the disaster with her father and then-fiancé, Mark Mezvinsky. Now she was returning with the medical aid group Partners in Health, whose co-founder, Dr. Paul Farmer, was her father’s deputy in his Office of the UN Special Envoy for Haiti. What she saw profoundly disturbed her.

Five weeks after the earthquake, international responders were still in relief mode: U.S. soldiers roamed Port-au-Prince streets on alert for signs of social breakdown, while aid groups held daily coordination meetings inside a heavily guarded UN compound ordinary Haitian couldn’t enter. But Haitians had long since moved on into their own recovery mode, many in displacement camps they had set up themselves, as responders who rarely even spoke the language, Kreyòl, worked around them, oblivious to their efforts.

“The incompetence is mind numbing,” she told her parents. “The UN people I encountered were frequently out of touch … anachronistic in their thinking at best and arrogant and incompetent at worst.” “There is NO accountability in the UN system or international humanitarian system.” The weak Haitian government, which had lost buildings and staff in the disaster, had something of a plan, she noted. Yet because it had failed to articulate its wishes quickly enough, foreigners rushed forward with a “proliferation of ad hoc efforts by the UN and INGOs [international nongovernmental organizations] to ‘help,’ some of which have helped … some of which have hurt … and some which have not happened at all.”

The former first daughter recognized something that scores of other foreigners had missed: that Haitians were not just sitting around waiting for others to do the work. “Haitians in the settlements are very much organizing themselves … Fairly nuanced settlement governance structures have already developed,” she wrote, giving the example of camp home to 40,000 displaced quake survivors who had established a governing committee and a series of sub-committees overseeing security, sanitation, women’s needs and other issues.

“They wanted to help themselves, and they wanted reliability and accountability from their partners,” Chelsea Clinton wrote. But that help was not coming. The aid groups had ignored requests for T-shirts, flashlights and pay for the security committee, and the U.S. military had apparently passed on the committee’s back-up plan that they provide security themselves. “The settlements’ governing bodies—as they shared with me—are beginning to experience UN/INGO fatigue given how often they articulate their needs, willingness to work—and how little is coming their way.”

That analysis went beyond what some observers have taken years to understand, and many others still haven’t: that disaster survivors are best positioned to take charge of their own recovery, yet often get pushed aside by outside authorities who think, wrongly, that they know better. Her report also had more than an echo of the philosophy of her Partners in Health tour guides. More than five years later, her candor and force of insight impress experts. “I am struck by the direct tone and the level of detail,” says Vijaya Ramachandran, a senior fellow at the Center for Global Development.

1 thought on “The Clintons’ Haiti Screw-Up, As Told By Hillary’s Emails”