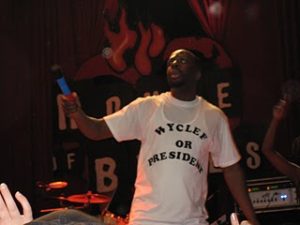 By: The Canadian Press

MONTREAL – A spokeswoman for Wyclef Jean isn’t saying whether the hip hop star has plans to run for the Haitian presidency.

Adrienne Jacoby was responding to a report in an Ottawa-based newspaper that says the Haitian-born musician is poised to run for president.

French-language newspaper Le Droit reports that a source close to the Haitian government is “sure” the singer and producer will be a candidate.

Jacoby, who works for Jean’s charitable Yele Haiti Foundation, says the performer would likely issue a statement if and when he announces his candidacy.

She says rumours have been circulating about the possibility of Jean making a run for the presidency of the Caribbean nation.

When asked by Fox Business this week if he would run for president, Jean responded “currently at this minute, no.”

Earlier in the week, he wrote on his Twitter page that he has not made any announcements to the media about his candidacy for the Haitian presidency.

Why does Wyclef play these stupid games?

It makes him look foolish.

He cannot be a candidate for the presidency of Haiti since he does not fulfill the residence requirements stipulated in the Constitution of 1987. A candidate must have lived in Haiti for the five years before the election.

There is no way