The old saying suggests that by letting a camel get his nose under the tent, he will soon manage to get his entire body inside.

This philosophy applies to the ongoing electoral fiasco in Haiti.

Let the opposition manage one small victory and they will soon control the entire game – AGAIN!

The CEP has effectively abandoned its overall responsibility to the Haitian people and will now see the BCEN conduct a recount on a small percentage of the ballots. There should be no danger to Jovenel’s landslide victory, but this depends upon who is in control of the tabulation and – the CEP guy in charge of tabulation is a Lavalas fanatic.

The CEP already has 2, possibly 3 members who have taken large bags of $100 American bills to create a blockage. Dorcely is one of these, and she acts as spokesman.

We must understand the medium to long-term goal of Aristide, and his surrogates Celestin, Moise Jean Charles. Like a hunter, they want to wound the elephant so it will weaken and can be killed – later – more easily.

They plan to make the Jovenel Moise Presidency impossible, because of doubts Aristide is now creating, via all sorts of surrogates like the fat, sweaty,  rumpled Michel Andre.

Radio Ti Moun is a most important weapon in the short, medium and long-term project to discredit and destabilize Jovenel – and the Nation.

Ti Moun must be closed and its owners prosecuted under the Code Penal. There are laws that prohibit their type of programming.

Jovenel must also make a bold, decisive statement of his true support – amongst the people. He should put his supporters on the streets in one massive manifestation of to show his  backing, otherwise, the small pinpricks of the Aristide/Lavalas team – as planned for today – will be like drops of water on granite.

In the long-term the small water drops will defeat the granite, unless diverted.

Jovenel must not be complacent. 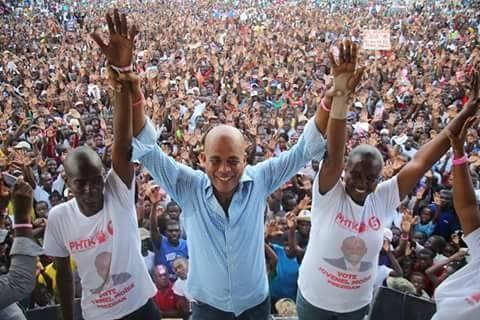 2 thoughts on “THE CAMEL’S NOSE”