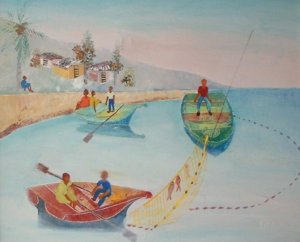 Rum and refugees apart, Haiti’s biggest export is art — vibrant, fantastical, brilliantly coloured paintings full of detail and symbolism, the best of which fetch many thousands of dollars in the United States and Europe.

Haiti has suffered every sort of adversity — slavery, war, brutal dictatorships, desperate poverty, floods, landslides — but the paintings themselves are customarily bright, gay and idealised. A multitude of artists transform the most wretched, impoverished country in the Western hemisphere into a bucolic, bountiful Africanesque paradise full of joyful people and magical creatures.

It is a form of escapism, says Bill Bollendorf, who sells Haitian art through his Galerie Macondo in Pittsburgh: “They live in such misery in real life, but in their fantasy lives they occupy a much better place.”

Toni Monnin runs one of Haiti’s leading art galleries, agrees: “Haitians don’t like to depict the sadder or tougher side of life because their lives are already so difficult.”

Could that innate optimism and resilience survive an earthquake that destroyed Port-au-Prince, left 1.2 million inhabitants homeless, and killed 230,000? Ninety per cent of Galerie Monnin’s 60 artists lost homes, relatives, materials — everything. Priceless collections of Haitian art were lost beneath the rubble.

Two months later the first “earthquake paintings” are emerging. They are as powerful in their way as the most harrowing photographs of that catastrophe, and say much about the Haitian character. They do not ignore the horrors, but neither do they dwell on them. Their predominant message is one of faith, hope and salvation.

“It’s a kind of catharsis,” says Monnin. “It always comes back to resilience. It’s the Haitian thing. You just get on with life and keep going.”

Without a doubt, Haiti has more great artists per square mile than any other country in the world.

Without a doubt, these artists have been screwed by gallery owners since George Nader first started exploiting them during the sixties on an international level.    Nader wasn’t satisfied with maintaining the purity of Haiti’s art. Recently, some 40 % of the paintings hanging in his Petionville gallery were fakes.

One person recently bought a Carlo Jean Jacques with paint still damp…. A great trick since the artist has been dead for many years.

H.R. Bresil is another one of Nader’s favorite. Bresil has painted more pieces for Nader – since his death – than he produced during his life!! He manages an output of Sejournes that sometimes have eight different signatures on 10 pieces hanging in his showroom. A Sejourne can cost you $30,000 American so Nader’s investment of $300.00 is not misplaced.

Recently, Nader had to reimburse a Japanese purchaser something like $1.600,000.00 for bad pieces.

In American he should be charged in a criminal court since his galleries there sell the same fraudulent pieces.

Preval talks about stamping out corruption. One of his first small efforts should be one that sees the fake artists punished so that the real  artist’s work will be recognized for what it is….the real thing..