By David Adams and Amelie Baron 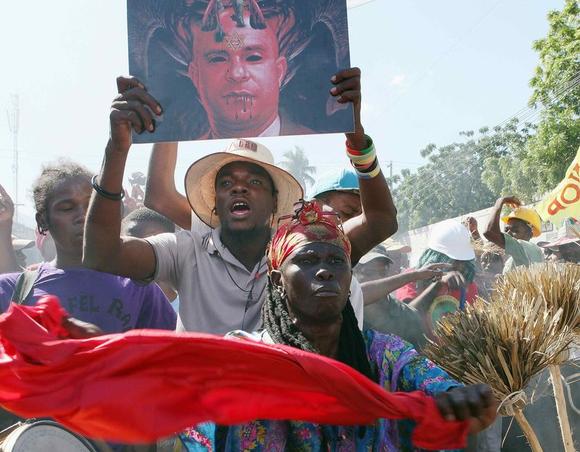 A demonstrator carries a portrait depicting Prime Minister Laurent Lamothe as a demon during an anti-government protest in Port-au-Prince December 6, 2014.

(Reuters) – The Obama administration and the United Nations are pressuring Haiti’s government to resolve a long-festering dispute over postponed elections in the face of anti-government protests across the impoverished Caribbean country.

U.S. and U.N. diplomats are in talks with Haiti’s government and opposition politicians aimed at reaching agreement in the next few weeks, and U.S. Secretary of State John Kerry may visit Haiti later this week, officials told Reuters.

The clock is ticking, with the terms of senators and lower house representatives ending on Jan. 12. A lack of agreement by then would effectively dissolve parliament, and would likely set off a national political crisis.

Stéphane Dujarric, spokesman for U.N. Secretary-General Ban Ki-moon, said the U.N. is making “maximum efforts” to reach an accord but is concerned about the lack of agreement on a framework for elections. “The window of opportunity is fast closing,” he said.

Legislative and municipal elections have been held up by a dispute between the government of President Michel Martelly and a group of opposition senators over details of a proposed electoral law.

On Tuesday, a presidential commission appointed last week to come up with proposals to break the deadlock recommended the resignation of Prime Minister Laurent Lamothe and his government, as well as the head of the Supreme Court, while calling for a truce between opposing political groups.

In a meeting at the presidential palace Martelly asked for three days to study the proposals, saying he remained “open,” and would analyse them with his advisers.

Municipal elections have been delayed for three years, while elections for a third of the Senate’s seats were to have been held in 2012.

Opposition leaders have accused Martelly of scheming to rule by decree during the final year of his term in order to manipulate presidential elections scheduled for next year. They say the government has not seriously engaged the opposition or offered reasonable concessions.

For its part, the government has accused the opposition of holding the country hostage and trying to sabotage democratic rule.

In one statement, Information Minister Rudy Hériveaux described the opposition as “cockroaches” and “a spectacle, symptomatic of the stupidity of a certain retrograde political class.”

Haiti has a long history of convulsive elections and is still recovering from an earthquake nearly five years ago that leveled much of the capital, Port-au-Prince.

In recent weeks street protests about the elections and alleged government abuses have spread across the country, shutting down some towns and blocking major roads.

Some observers say the United States let the crisis drag on too long by seeming to side with the Martelly government, emboldening the fiery-tongued president, who once was a singer of bawdy folk songs known as “Sweet Mickey.”

“They coddled Martelly far too long … though that finally seems to be changing,” said Robert Maguire, a Haiti scholar at the George Washington University.

U.S. officials have defended Martelly, noting that he enjoys a popularity rating hovering around 60 percent.

“Haiti has made a lot of progress since the earthquake, but the electoral gridlock is adding to the current tensions,” said one senior U.S. State Department official.

“We believe Martelly is committed to making a deal, and we think they can make an agreement in time,” he said.

One plan under discussion: extending parliamentary terms until elections next summer, with presidential elections in November. Foreign donor countries, however, would prefer that Haiti hold legislative, municipal and presidential elections on one day next year, which would cut costs by half. It is estimated that if held separately each election would cost $30 million – money Haiti can ill afford.

Many in the international community, including key lenders such as the World Bank and the Inter-American Development Bank, say Lamothe, the prime minister, has run an efficient administration and has improved infrastructure, including rural roads.

But the country’s debt, which was forgiven after the earthquake, is mounting again, including more than $1.6 billion owed to Venezuela’s preferential Petrocaribe fuel program.

“Haiti is rotting, the lights are out, there is misery and they are wasting public money,” said Jean-Louis Exerge, who joined about 3,000 protesters who marched peacefully in the capital on Saturday calling for the government to resign.

COMMENT: HAITIAN-TRUTH.ORG
Actually there were fewer than 1000 marchers.
The stunning fact. The demonstrators were paid by President Martelly who is supposed to be the Prime Minister’s best friend. The recent DEA arrest of his brother-in-law’s associate set Kiko off on an assault against Prime Minister Lamothe. Now, it seems that Martelly is taking Kiko’s side in a battle that should see Martelly loyal to Haiti, and its 10,000,000.  Without his wife, and her family, Martelly would be OK.
The opposition would like to get rid of the popular, capable Lamothe. Then it will be easy to knock down Michel Martelly, putting an inglorious end to what should have been a great presidency.
Sad, sad, sad.
Haiti loses again.