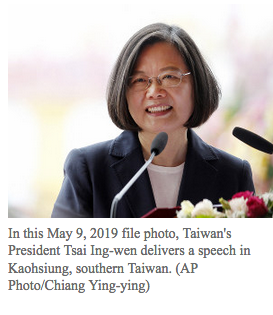 TAIPEI (Kyodo) — Taiwan President Tsai Ing-wen embarked on a trip to four diplomatic allies in the Caribbean on Thursday as political rival China continues efforts to diplomatically isolate the self-ruled island on the world stage.

The 12-day tour, the seventh state visit since Tsai took office in May 2016, will take her Haiti, St. Kitts and Nevis, St. Vincent and the Grenadines, and St. Lucia.

Speaking at Taoyuan International Airport before her departure, Tsai said that she hopes her visit will help secure more business opportunities for Taiwan and boost the island’s international presence.

She will transit in New York City on her way to Haiti, and Denver, Colorado, on her way home.

Beijing had urged the United States to reject Tsai’s planned transit stops, saying China strongly opposes any official interactions with Taiwan and that the United States should uphold the “one China” principle based on the three Sino-U.S. communiques.

Sitting leaders of Taiwan are not be permitted to visit the United States except for transit stops.

Taiwan has 17 diplomatic allies. Nine are in Latin America and the Caribbean, six in the Pacific, one in Africa and one — the Vatican — in Europe.

China has stepped up its efforts to diplomatically squeeze Taiwan internationally since Tsai of the independence-leaning Democratic Progressive Party came to power in May 2016.

Last year alone, three of Taiwan’s diplomatic allies severed ties with Taipei and established them with Beijing. El Salvador was the fifth country to do so since Tsai assumed office.

Taiwan and mainland China have been governed separately since they split amid a civil war in 1949. Beijing has since then endeavored to diplomatically isolate Taiwan, which it regards as a renegade province awaiting reunification.