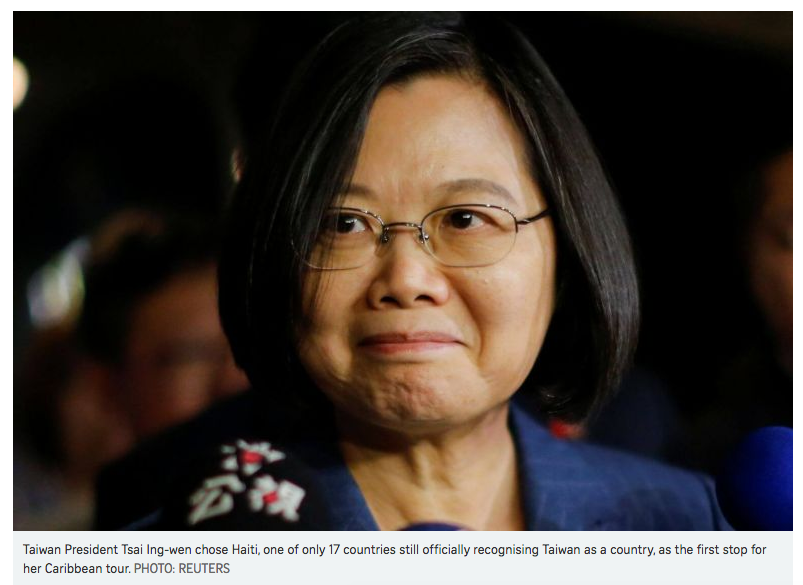 PORT-AU-PRINCE, HAITI (AFP) – Taiwan President Tsai Ing-wen’s choice of Port-au-Prince as the first stop in her Caribbean tour is highly symbolic of the diplomatic power struggle being played out in the region.

Last year, the neighbouring Dominican Republic dropped Taipei and threw in its diplomatic lot with Beijing, leaving Haiti as one of only 17 countries still officially recognising Taiwan as a country.

Since Ms Tsai became president, China – which considers Taiwan part of its territory – has poached five of the island’s dwindling roster of allies, and some in Haiti think President Jovenel Moise should do more to leverage that diplomatic tension when the two leaders meet on Saturday.

In May 2018, Mr Moise visited Taiwan but failed to come away with any significant achievements.

“There was nothing concrete, nothing new to come out of it except for a loan which had already been negotiated well ahead of the visit,” said Haitian economist Etzer Emile.

While Chinese loans and investment offered to the Dominican Republic already amount to almost US$3 billion (S$4.07 billion), Taipei has offered Haiti US$150 million for projects to expand its electrical power grid.

Those funds have yet to be transferred because the loan hasn’t been ratified by the Haitian parliament.

Lawmakers in the assembly prefer instead to lay blame for the weakness of relations between the two countries on the executive branch.

“If Haiti hasn’t yet demanded much larger cooperation with Taiwan, we can’t say that having relations with Beijing would be more profitable,” said Mr Alfredo Antoine, who heads the foreign affairs commission.

Despite holding a trump diplomatic card, Haiti does not seem to getting much out of it.

“Beijing’s push to recover the region could be a good chance for Haiti to demand more from its traditional partners in terms of investments and large-scale projects,” said Mr Emile.

“But we have to know how to position ourselves, otherwise we’ll just continue getting monthly donations of dozens of tons of rice.”

But Haiti’s bargaining power has been eroded by growing street protests demanding Mr Moise’s resignation, and he has not had a functioning government for months.

Parliament can barely get enough attendees to hold a session, and the political crisis is sapping diplomatic efforts.

On top of all that, US President Donald Trump’s trade war with China has put additional pressure on Haiti to maintain ties with Taiwan.

“It is down to Haiti to define its relations, no other country can tell us how to conduct our overseas relations,” said Mr Antoine.

In January, under US pressure, Haiti backed a resolution by the Organisation of American States condemning Venezuelan leader Nicolas Maduro, despite the country’s longstanding ties with the socialist regime in Caracas.

If the Taiwanese president can count on diplomatic ties with Haiti, investors travelling with her may not feel pressure to unveil any major projects, to the chagrin of the Haitians.

“The country needs to be helped to find loans that meet the demands of the modern world: roads, airports, ports… We don’t want hand-outs, that pushes us deeper into the abyss because that can’t boost real development in the country,” said Mr Evaliere Beauplan, an opposition senator who heads the foreign affairs committee in the upper chamber.

With almost daily clashes between protesters in the streets of the capital, however, Port-au-Prince is not well placed to host foreign dignitaries.

Mr Moise has yet to receive any of his counterparts at the presidential palace. The last head of state to visit Haiti was Dominican President Danilo Medina in October 2016.