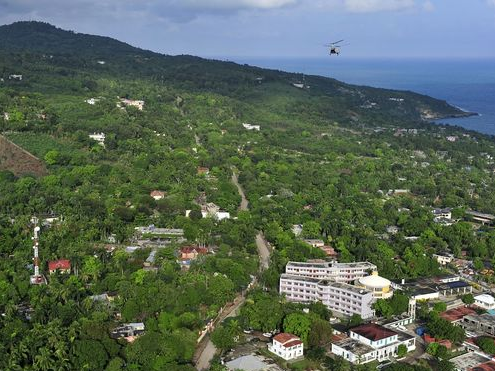 A senior government source said the two sides were in talks to finalize a deal to help Haiti build new or upgrade existing electrical substations, electricity distribution networks, and transmission towers and help train people who will be responsible for maintaining the grid.

The source said Taiwan and Haiti hope to sign the deal before the end of this year to start the project that previous estimates indicate could take more than two years to complete.

Once the deal is sealed, it will become the first project launched with an ally under Taiwan’s Official Development Assistance (ODA), a program designed to help countries develop their infrastructure while also getting business for Taiwanese contractors.

The source, speaking on condition of anonymity because the deal has yet to be finalized, did not disclose the estimated amount needed to complete the project, but previous media reports said Haiti is hoping Taiwan can help it secure a NT$4.5 billion (US$150 million) loan under the ODA program.

The Miami Herald reported in May that Taiwan’s government had agreed to a US$150 million low-interest loan for Haiti’s rural power grids, but Taiwan did not confirm that at the time.

The source said Taiwan will help Haiti secure a loan from Taiwanese banks that will then be used by Haiti’s government to pay Taiwanese businesses responsible for the construction of the project.

Asked to confirm the ongoing talks as revealed by the source, foreign ministry spokesman Andrew Lee (李憲章) told CNA that the ministry is still evaluating all possible cooperation projects in its allies and no final decision has been made.

“We will make it public once any deal is finalized,” he said.

Previously commenting on Taiwan’s ODA program, Foreign Minister Joseph Wu (吳釗燮) stressed that strategic loans to Taiwan’s diplomatic allies are designed to create “win-win-win situations” and do not represent a return to checkbook diplomacy to compete with China for those allies’ allegiance.

During a legislative hearing in May, Wu told lawmakers that Taiwan was no match for Beijing and had no intention to compete with it in offering astronomical sums to lure allies.

“We are not competing with China over allies with financial aid. We are genuinely offering help to them,” he said.

The source told local media Tuesday that, other then the project in Haiti, Taiwan is also engaging in talks with other diplomatic allies on similar ODA projects.

The government will also encourage more private business sectors to invest in countries allied with Taiwan as a way to cement ties, the source said.

Taipei is beefing up its efforts to cement ties with its 18 remaining diplomatic allies after losing four of them to Beijing’s monetary incentives since President Tsai Ing-wen (蔡英文) took office in May 2016.

The countries shifting allegiance to Beijing were Sao Tome and Principe, in December 2016, Panama, in June 2017, the Dominican Republic, in April 2018, and Burkina Faso, in May 2018.