Haiti (MNN) — A Gallup report published yesterday says the three countries with the greatest suffering on this globe are South Sudan, Haiti, and Ukraine. We’re going to take a look at one of these countries today, Haiti. 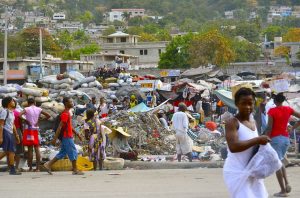 The report says that 43 percent of Haiti’s population is suffering, 54 percent is struggling, and only three percent is thriving. These percentages are based on a subjective number scale where pollsters are asked to rate how they view their life and their future from worst possible to best possible.

But the findings are consistent with the conditions in Haiti. The nation has a history of human rights violations, upheaval, and instability. Today, the country is led by an interim government. According to the CIA World Factbook, the unemployment rate is over 40 percent, and the poverty rate is nearly 60 percent.

Eva DeHart of For Haiti with Love says, “They have been victims of natural disasters and they can accept that. More hurtful is the exploitation that went along with those natural disasters.”

Many have questioned the allocation of relief aid that was raised shortly after the earthquake disaster of 2010. While the immediate response in relief was great, it seems as though Haiti is permanently stuck in recovery mode.

DeHart says much of the population remains homeless, and subsequent natural disasters have hurt crop production. Jobs are scarce and healthcare is floundering.

“The government is apparently without funds because the doctors are not being paid. The hospitals are closing.”

Strength in the suffering 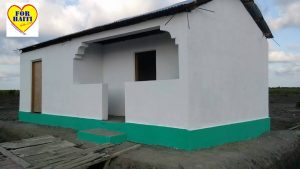 So, while Haiti could be characterized as a country enduring many trials, DeHart says something unexpected. When people visit the island, this is what they often see: “The genuine joy that’s reflected in the smiles of the Haitian people. How, as family units, they just tend to be very supportive and very happy and they play together, they laugh together. They overcome their poverty, they overcome their suffering with their personal interactions which are a joy to watch.”

DeHart says perhaps it’s these people who could teach the rest of us about a happiness that’s not based on circumstance.

Helping where they can

With a myriad of systematic issues like Haiti’s, it seems impossible that any one ministry could make a difference. But For Haiti is focusing on the needs right in front of them where they truly can make an impact.

“For Haiti with Love steps in, in the form of an emergency band-aid so to speak. But we focus on emergencies so we specialize on burn care and we handle other emergencies that we can.”

The ministry has also helped with feeding programs and housing. But it’s not just about the temporary situations, either. As stated on For Haiti with Love’s website, “Everything is done as a gift from God through His people, every recipient is very aware that they thank God for their help.”

It is often the avenue of kindness that causes people to want to learn more about Jesus.

An effort by the whole Church 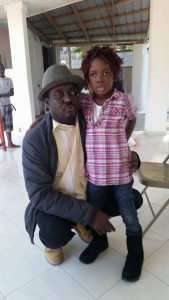 A little girl stands with her father after receiving special care for her burns in Boston.
(Photo courtesy of For Haiti with Love)

What drives a ministry like For Haiti with Love when the challenges remain? DeHart says much of their strength comes from the Body of Christ partnering with the ministry.

“To take the care and the love from the people who are willing to give, and to deliver it to the people who hurting, and to make sure they know it’s God’s love being shared nation-to-nation is a privilege. It just exceeds words,” she says.

The ministry continues to give thanks to God for allowing them to do this work in Haiti.

If you’d like to help, consider giving to the ministry here.

And please, pray. Pray for relief for Haiti — from natural disasters, from corruption, from poverty, and instability. Lift up this country in your prayers. Ask God to bring growth here, and that He would heal the economy with new jobs. For more information on this ministry, click here.