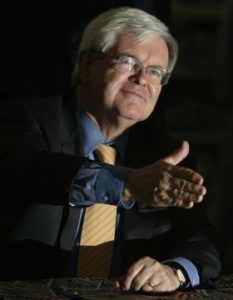 “It is my pleasure to support Bernard in his run for Congress.” commented Gingrich. “It is time to get behind candidates with integrity and goals that we can all admire.”

Sansaricq Is challenging incumbent Congressman Alcee Hastings. Hastings is an impeached federal judge, is listed on Judicial Watch’s most corrupt politicians list, and is currently being investigated by the House Ethics Committee.

“As president of the Haitian Senate, Bernard Sansaricq proved that his loyalty lies only to the people that he represents.” Gingrich recalls “I have every confidence that he will continue this tradition of holding others above self in his service in the Congress.”

Bernard Sansaricq was pleased to accept the endorsement and support of Gingrich. “This is the year that we will win real representation for the people of this district.”

Bernard Sansaricq is Republican candidate for the U.S. Congress District 23 seat and former president of the Haitian Senate.

Bernard Sansaricq is a competent action leader who is superbly qualified, intelligent and has an impeccable record.  He is currently finishing his second book on international affairs.

Bernard Sansaricq is married to Alejandra Jimenez de Sansaricq and is the father of 4 grown children. Sandra, Pascale, Monique, and Nicole. Bernard and his family have lived in South Florida for 25 years, where he works in the residential real estate profession. He is fluent in French, English, Creole and Spanish.

More information about Sansaricq and his campaign can be found on his website, www.sansaricq4congress.org.