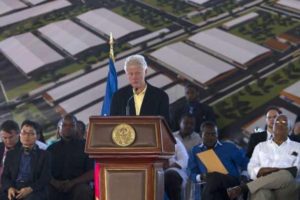 CARACOL, Haiti — The biggest international project aimed at helping Haiti rebound from the 2010 earthquake eased closer to reality at a ceremony Monday.

Former U.S. President Bill Clinton and Haitian President Michel Martelly broke ground for an ambitious $224 million industrial park in northern Haiti that they hope will generate tens of thousands of jobs, house 5,000 of the workers and educate 500 of their children in a new school.
Those involved hope the South Korean garment manufacturer Sae-A Trading Co. Ltd. will set an example and urge other foreign businesses to invest in Haiti, a country long ignored by outsiders because of its cumbersome laws, heaps of red tape and occasional political tumult.

The project on the 617-acre (250-hectare) site was in the works long before the January 2010 earthquake but became a priority after Clinton was named the United Nations’ special envoy for Haiti in 2009 and given responsibility for spurring private investment.

On the eve of the quake’s first anniversary, the Haitian government and Sae-A signed an agreement to create the industrial park, which will export clothing to the United States. Among the company’s 20 existing factories are plants in Nicaragua, Guatemala, Indonesia and Vietnam.

The United States has provided $120 million for generating electricity, housing for workers and improvements to a port in the north. The Inter-American Development Bank will provide $50 million for building factory shells and infrastructure.

The Caracol industrial park is intended to be Haiti’s largest private employer, with a goal of providing 20,000 jobs at the park and creating 133,000 in all through cottage industries.

The first T-shirts are scheduled be made in May or June of next year.

Workers will be paid Haiti’s minimum wage, which is $5 a day, and will be eligible for bonuses based on performance.

Clinton said the industrial park will eventually improve the lives of about 500,000 people as the complex brings in other tenants and small businesses emerge around the plant.

Thirty percent of Sae-A’s jobs will be set aside for women.

Nella Felix hopes to be among them. She’s a sometime street vendor who makes up the 60 percent of the population that makes about $2 a day.

“For me, it’s a real way for the youth of the community to live, to find jobs and work,” Felix, 42, said after the ceremony. “I’m waiting to see what they can do for us.”

Critics of the industrial park argue that Haiti would be better off investing money in its long-neglected agriculture sector instead of the garment sector, which has stumbled along because of sporadic political upheaval.

Reginald Boulos, a business leader and former senator for the region, acknowledged the shortcomings but said the thousands of jobs will stimulate the area’s economy, allowing parents to send their children to school.

“I don’t think an industrial plant is the best way to create jobs,” Boulos said before the ceremony started. “But it’s a beginning. It’s a first step to being self-sufficient.”

Separately, Clinton and Martelly announced Monday that the Digicel phone company will help build a $45 million, 173-room hotel with Marriott International. The new franchise is expected to create 175 jobs.

Construction is expected to begin next year in Turgeau, one of the few middle-class neighborhoods in Port-au-Prince proper. Opening is scheduled for mid-2014.