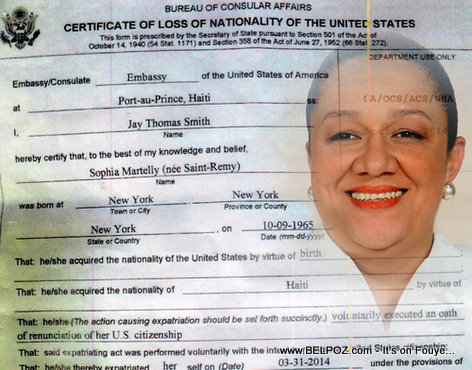 Getting rid of your American Citizenship involves more than the signing of a single form.

There are two sides to this issue:

The form Sophia filled out is the first step. The final step requires certification by the IRS that Sophia has cleared all debts and responsibilities to the American tax system.

The American IRS requires that all American citizens and Legal Residents declare their “Global Income” even if there is not tax due.

Sophia has stolen so many millions and – we are sure – has not declared this stolen money on her annual tax return.

In effect, if this is so, she has committed a Felony Offence and liable to a sentence of many years in a federal prison. This is what caught Mafia chief Al Capone. He didn’t declare his illegal, criminal earnings.

We have attached an American Government web site that lists all of those who have been officially cleared by the Internal Revenue Service and – because of this – have officially had their citizen ship revoked, as requested.