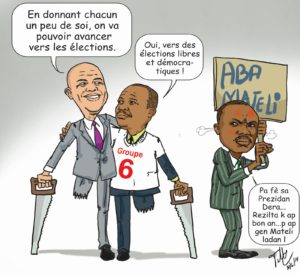 There has been much confusion and misinformation surrounding the October 2014 municipal and legislative elections in Haiti.  Given Haiti’s fragile and ongoing recovery from the massive 2010 earthquake and the necessity of international aid for this effort, this type of misinformation is particularly damaging.  It is important to focus on the facts and ensure a level approach to this important electoral process.  The stakes are high for this election cycle — two-thirds of the Senate seats are up for vote, the entire House and 140 municipalities will vote for new mayors.

There are two fundamental misconceptions circulating that are highly detrimental to the democratic process in Haiti. First that Haiti’s elections are late and political actors are locked in a stand off.  And second, that the Martelly Administration has dragged its feet putting in place the legally required infrastructure to conduct the elections. This is unequivocally not the reality.

Haiti has been heading down the arduous road of democracy building for the past 25 years.  The pace has been slow – and sometimes quite difficult.  There have been setbacks.  But, there can be no doubt that the democratization process is moving forward.  And herein lies the source of the misinformation.  Many actors – sensing a shift from the old days of corruption and winner take all dynamics – are threatened by the democratization efforts and consistently seek to use misinformation, misconceptions and even violence to undermine the process. These actors (effectively a political cartel) – comprised of Fanmi Lavalas and INITE – has been largely successful employing these tactics and engaging international and U.S. forces to force the Haitian government to bow to their demands in the name of stability.

The fact is that the current electoral process actually started in July 2012 – right on schedule. The first step was to name an electoral body, the Permanent Electoral Council (CEP), to manage the elections. The Haitian constitution requires that each branch of government provide three members to constitute the CEP. Haiti’s political cartel has controlled 14 of the 17 CEP seats from 1990 through the November 2010 elections.  They have leveraged this control to manipulate and change the results of elections to stay in power in six recent elections: 1995, 1996, 1997, 2000, 2009 and 2010. There are numerous national and international electoral observation reports documenting the facts.

Illustrating that democratization is taking hold, their 2010 electoral coup partially failed because the people took the streets to defend their vote for President Michel Martelly.  INITE, however, managed to steal five senate seats and 37 seats in the lower house.  So today, this political cartel is insisting that in order to participate in the elections, they must control the CEP and occupy as many positions as possible in the government so they could campaign with state resources.  Lavalas, INITE and Lespwa were able to do this for twenty years, but lost control in November 2010.

The other political parties, of which there are 68, are willing to play by the rules, share power, campaign hard, and develop platforms and proposed solutions to earn the electorate vote.  This group, which includes parties such as FUSION, MDN, Tet Kale and many others, just wants to ensure a fair and non-partisan CEP.

To bridge this divide, the Martelly Administration has made a concerted effort to follow the letter of the electoral law while simultaneously launching a long and difficult political dialogue to build consensus around the organization and administration of the October elections.

As mentioned, the electoral process began in 2012 immediately following the publication of a constitutional amendment.  In accordance with the amendment, the President wrote to the Legislature and Judiciary requesting that each appoint their three representatives.  The President of the House, the coordinator of INITE, complied while the President of the Senate objected to the actual formation of a Permanent Electoral Council (CEP).  Instead, he proposed the formation of an exceptionalelectoral body, known as the CTCEP or transitional permanent council. President Martelly compromised and signed anagreement on December 24, 2012 to form the CTCEP.  Despite this compromise, there were continued political demands from Senate members of the political cartel for participation in the Martelly Administration.

Again in the spirit of compromise and inclusion, the Martelly Administration embarked upon an unprecedented political dialogue last February to build broad base political support for the national agenda and explore additional avenues of participation in the Administration.  With the Administration’s support, Haiti’s first Cardinal, Chibly Langlois, organized and moderated the dialogue which spanned five weeks and resulted in the signing of a Political Accord on March 14, 2014 by representatives of the Senate, House and fifty political parties. In the Accord, which was intended to open the way for the elections, the Martelly Administration honored 100% of the opposition’s requests. Significant outcome from the Dialogue were: 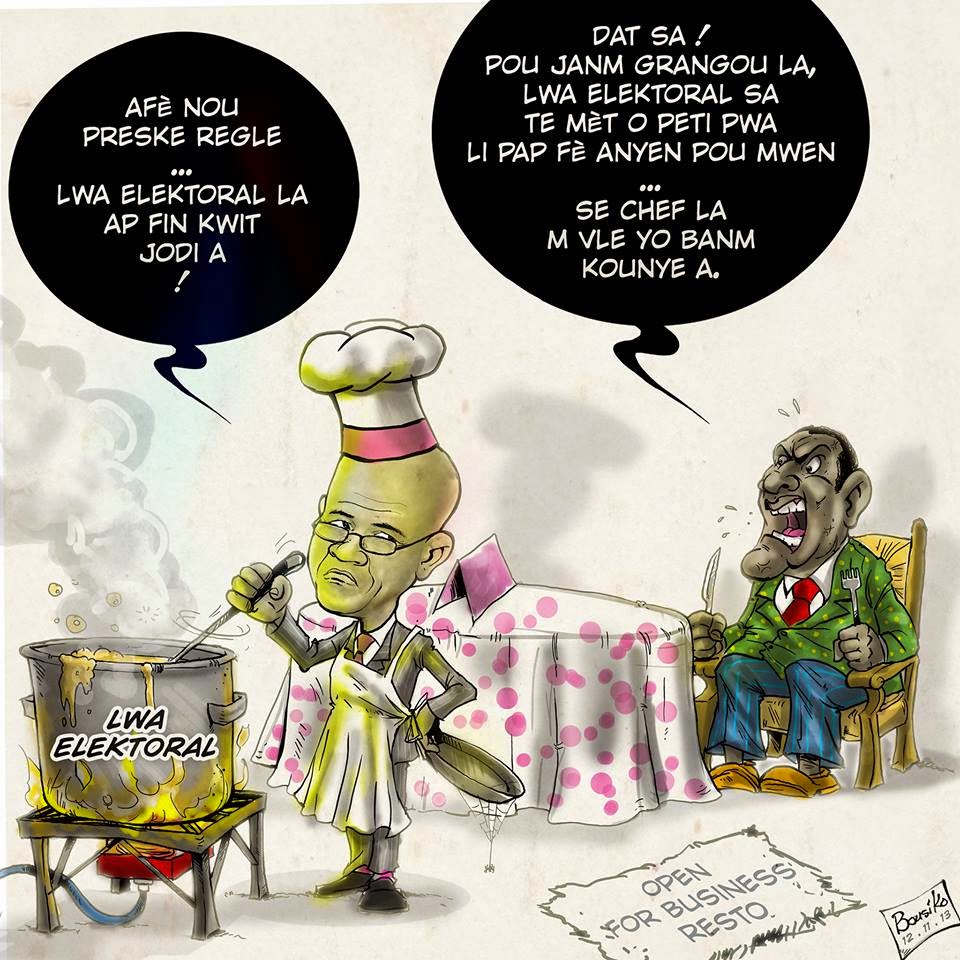 All participants – with the exception of the political cartel – approved the new roster. Martelly delivered everything stipulated in the political agreement, and the House of Deputies respected their part of the Accord.  The Deputies voted unanimously for the electoral law on April 1, 2014 and transmitted the law the same day to the senate.  Yet five months after, it remains to be voted on in the Senate because six Lavalas senators are refusing to sit thereby making it impossible to reach a quorum in order for the senate to debate and vote on the law.

These six senators are fundamentally opposed to the organization of the elections.  According to many reports, their ultimate goal is to remove Martelly from office though a coup d’etat before his term is over in 2016. In fact, members of the political cartel have publicly stated this intention.  In an interview with Scoop FM Senator Moise Jean Charles clearly stated this goal since 2013.  Every two weeks they come up with an excuse to avoid the vote of the electoral law.  One week they were demanding the implementation of transitory provision of the constitution, which is not longer applicable, and another they are calling for the removal of the Prime Minister.  Their last demand was for Martelly to intervene in current judicial proceedings in order to secure the release of two criminals convicted of murdering a law student, six months prior to his graduation in 2010 when Preval was still President. 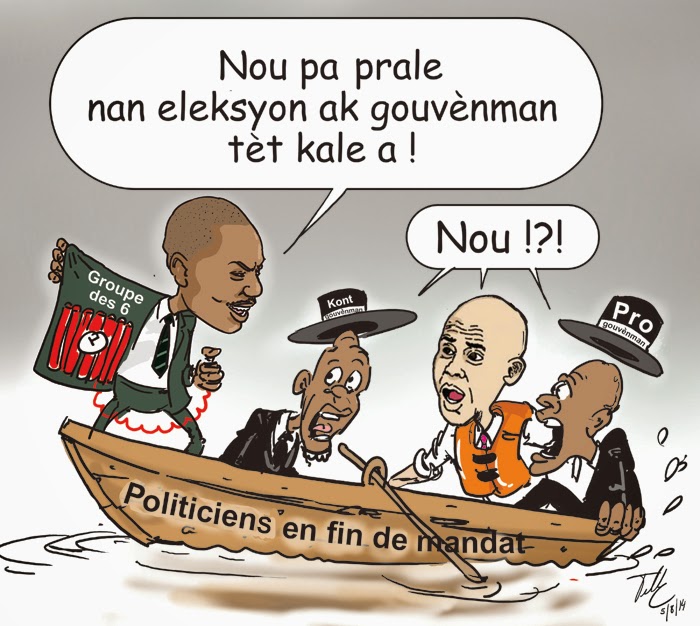 If the law is not voted pass the Senate in the next two weeks there will be no elections in Haiti this year. The international community is getting impatient. The Permanent Council of the Organization of American States has issued adeclaration acknowledging that President Martelly and the House of Deputies have fulfilled all the political and legal commitments for the organization of the elections. The declaration states that the Senate has failed to act and call upon them to move the process forward.

In the second scenario, elections do not take place, and there will be no parliament as of January 20, 2015, which is the date that the Deputies’ terms expire as well as two-thirds of the Senate and Martelly will govern by decree until the next elections take place in 4-6 months.  This scenario occurred in 1999 when President Preval acknowledged the end of parliamentary mandate in 1999.  At that time, a group of OPL parliamentarians were playing the same game with President Preval.  At the end of parliament in January 1999, Preval met with the political parties that wanted elections and signed the March 4, 1999 Political Accord with them, which provided for a CEP and an electoral decree for the May 21, 2000 elections to take place.  This latter scenario becomes more probably if after the House goes on vacation on September 15, five senators decide to resign as announced last week.

The reality is that the Martelly Administration has been implementing an unprecedented strategy of compromise and inclusion in laying the groundwork for free and fair elections. This is a remarkable break from the past 40 years in which the political culture was dominated by a winner-take-all approach that featured vote rigging and manipulating the electoral body. This Administration knows that political stability is critical to Haiti’s recovery – both from the earthquake and from the crushing poverty that continues to plague our beloved country.  Those efforts toward inclusion and compromise are intended to demonstrate to Haitian citizens and friends of Haiti that the country is in fact on a new path.  As a result of these efforts, Martelly is enjoying a 73% approval rating domestically and fair media coverage internationally.

While recovery may not be moving as fast as anyone desires, there are significant accomplishments, including 4.3% economic growth (up from the historic average of 2%); finding housing for 3.5 million citizens who lost their homes in the earthquake; creating 50,000 new jobs; facilitating the building of 12 new hotels to jump start tourism; and, reducing kidnappings from 600 per month to zero for the month of August 2014.  Yet, there are still 137,000 people living under tents.  Despite these huge efforts there are still 4 million people living in poverty, unemployment is high and lack of resources to address these huge challenges and infrastructure to move the country forward.

With this momentum, the efforts of the six senators to bring back the status quo and instability are even more frustrating and abhorrent.  Haiti is not heading toward imminent collapse, as some skeptics would have you believe, but we certainly must redouble our efforts to address the serious challenges that face our proud country.  The road to democracy and recovery is long, challenging and potentially winding, but there should be no doubt that Haiti is on the right road.