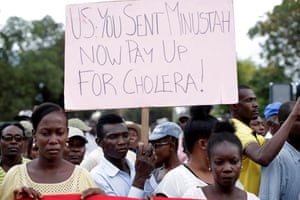 Haitian protesters call on the US to pay for the cholera outbreak caused by Minustah, the UN peacekeeping mission in Haiti. Photograph: Andres Martinez Casares/Reuters
Global development is supported by

Human rights lawyers have accused the UK and other large donors of blocking the release of a multimillion-dollar UN fund to provide relief to victims of a cholera epidemic that has killed 10,000 people in Haiti.

The outbreak, which affected hundreds of thousands of Haitians, was caused when infected UN peacekeepers from Nepal brought the disease to the country in 2010. 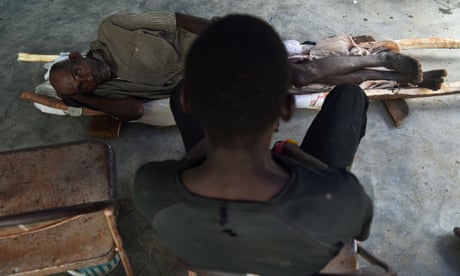 In June, the UN secretary general, António Guterres, asked member states to allow him to repurpose $40.5m (£30m) of leftover money to the Haiti cholera fund, which he said could have an “immediate impact in saving lives”.

The appeal to reallocate unspent money designated for Haiti in 2015-16 has met with strong resistance from major donors. None of the five UN security council’s permanent members, which includes the US and the UK, approved the proposed funding reallocation. The UN Haiti cholera multi-partner trust fund, which gathered more than $2m, now lies almost empty.

Brian Concannon, executive director of the Boston-based Institute for Justice and Democracy in Haiti (IJDH), said: “We have had conversations with the UK about cholera for years. They have been saying, ‘This is a matter of principle and we need to expect the rule of law.’”

“Now that the money is on the table, the fact that the UK is not reallocating it is very concerning. No one else is going to step up.”

Concannon, who was in the UK this week to meet the all-party parliamentary group on Haiti, said: “We’re asking the UK to take a leadership role in the UN security council. All the [permanent security council members] spend hundreds of millions of taxpayers dollars on the UN. But the UN is flouting its legal responsibilities towards the people of Haiti on cholera.”

The UN only admitted its role in the outbreak last year. Former UN secretary general Ban Ki-Moon issued a carefully worded apology and said that the UN and member states had a “moral obligation” to relieve the Haitian suffering. The agency promised to raise $400m from member states to provide assistance to the Haitian victims. Since the fund was set up, however, only about $2.6m has been collected. The UK has donated $623,000 to this fund. Its share of the unspent $40.5m would be more than double that amount, at $2.3m.

The IJDH works with thousands of cholera victims through the Bureau des Avocats Internationaux, a Port-au-Prince based human rights law firm. A lawsuit the groups filed on behalf of 5,000 cholera victims in a New York federal court in 2013 was dismissed by a judge, on the basis of UN immunity. After an appeal, the US second circuit court of appeals in New York upheld the decision in 2016.

Concannon is also working with the US Senate, to mobilise support for reallocating the funds. Democratic and Republican lawmakers have in the past criticised the Obama administration and the UN for failing to ensure Haiti’s victims were helped.

Concannon said it was “shameful” the UN couldn’t come up with even a tenth of the amount originally promised. “The underspend idea wasn’t supposed to be the end result, but low-hanging fruit.

Mario Joseph, a lawyer with BAI, said: “Imagine what would have happened if the Nepalese had brought the disease to the UK? What would be the reaction here – would there be the same disregard as people have shown the people of Haiti? For that reason alone, the UK should take a leadership role.”

A Foreign and Commonwealth Office spokesperson said: “The UK recognises the devastating impact that cholera has had on the Haitian people, and we welcome the crucial role the UN is playing to eradicate it. The UK is the fourth largest donor to the UN trust fund, in addition to other contributions to tackling cholera in Haiti.

“It is for each UN member state to decide how to use returned unspent peacekeeping funds. We call on all countries to volunteer contributions to the UN trust fund from whatever source is appropriate for them.”