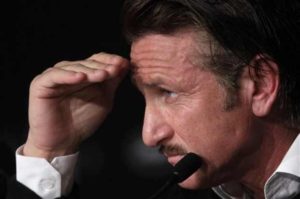 Sean Penn is serious about Haiti. He and director Paul Haggis combined their charitable efforts last night with supermodel Petra Nemcova’s HelpingHands.org, and they raised over $1 million at an elegant, fun dinner packed with A list names.

It was a much cooler affair than most Cannes fundraises, with a hilarious auction. Among he results: a package of tickets to the Golden Globes and various parties only brought in $70,00. So they impromptu added Butler, brought him to the podium, and offered a date with him. Finally a man Patrice Otsepe of African Rainbow Minerals, offered 100,000 “without Gerry Butler.” He won, Butler blushed, but was certainly thrilled not to have go on a date with a stranger.

Each of the three principals spoke passionately about Haiti, including Haggis, Penn and Nemcova (who have apparently rekindled their old romance with Haiti in common).

Lyle Lovett played a few songs from the stage, and later a Haitian band called RAM got the crowd dancing.

Meanwhile, around the Croisette, Gucci threw a star studded screening of the classic. “One Upon A Time in America” with Robert DeNiro and a slew of celebs.

After the Haiti dinner finished at 1 am, select diners who paid another $2,500 over the $5,000 dinner ticket were invited onto Paul Allen‘s largest-yacht-in-the-world with a yellow submarine for middle of the night merriment and maybe even some garage band rock and roll.

I did ask someone from the festival about my earlier report today about Italian actor Aneillo Arena being a lifetime prisoner for committing murders. Arena could win Best Actor here for “Reality.” Said the person I spoke to: “Well, that was fifteen years ago.” Yes, I replied, and the people are still dead.