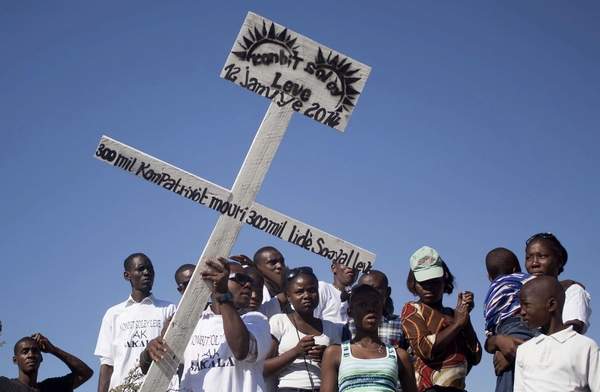 AP Photo/Jean Marc Herve Abelard
Relatives walk to a hilltop, where they will place a cross, in remembrance of those family members who died in the 2010 earthquake, prior to a memorial service in Titanyen, north of Port-au-Prince, Haiti, Jan. 12. Haitians paused to remember the tens of thousands of people who died in the 7.0-magnitude earthquake that struck outside Haiti’s capital on Jan. 12, 2010. The quake left 1.5 million people living in tent camps. Officials say more than 300,000 died, but no one knows for certain how many people lost their lives.
Almost five years after the catastrophic earthquake in Haiti, this country symbolizes poverty and hopelessness to many Americans.

PORT-AU-PRINCE, HAITI — Merry Christmas! Yet in this season of hope and holiday cheer, Haiti might not seem the obvious place to celebrate.

Almost five years after the catastrophic earthquake here, this country symbolizes poverty and hopelessness to many Americans. That despair and disdain are misguided. Haitian politics are still a mess, and poverty is deep-rooted, but the economy is rising, more children are going to school, and health is improving.

That, in turn, is emblematic of a broader truth that we journalists don’t acknowledge often enough: In many ways, the world is becoming a better place. There! I said it.

Bad news is news, and good news isn’t. We cover planes that crash, not those that take off. But a relentless focus on bad news unfortunately leads people to conclude that places from Haiti to Congo are hopeless, driving away tourists, investors and donors. So, at least once a year, it’s worth stepping back and acknowledging progress.

That’s particularly true because 2015 will be a crucial year for efforts to combat global poverty. There will be new financing in January for the global vaccine initiative that is saving lives on a huge scale, the African Union plans to focus on women’s empowerment, and the U.N. General Assembly in September is expected to agree on new “sustainable development goals” that will provide metrics for progress for many years to come.

So bear this in mind: Fewer children worldwide are starving or dying of disease now than at any time in recorded history, and more children are in school.

Here in Haiti, too many people are still homeless from the earthquake. But, in the last few years, the economy has been growing more quickly than the U.S. economy.

A U.S.-backed effort to support garment manufacturing in Haiti has fizzled. But agriculture, which may be the best hope for Haiti’s economic future, is improving in some important sectors.

I visited a program that trains flower farmers to use greenhouses and is supported by the United States as part of the Feed the Future initiative. One farmer, Michel Dorlean, told me that, with greenhouses, he has tripled production of chrysanthemums.

“You come back, and this hillside will be covered with greenhouses,” he predicted.

He added that the flowers I buy for my wife in New York will eventually be exported from Haiti.

Health care likewise shows basic improvements. More than 4 out of 5 Haitian children get some childhood immunizations. Deworming is now widespread.

“In the old days, these kids would be dead,” Dr. Margareth Mallet told me as she showed me around a ward treating severely malnourished children at a clinic here in the capital, Port-au-Prince. Now they’re revived with a peanut-based paste or other supplements.

There has also been a push to encourage Haitian moms to breast-feed, because that’s regarded by nutrition experts as one of the most cost-effective ways to save lives in poor countries (globally, an estimated 800,000 children die annually because of problems with breast-feeding).

In 1970, almost a quarter of Haitian children died before their fifth birthday. At last count, the figure is 7 percent. Just compared with 15 years ago, one fewer child dies each hour.

As families grow confident that their children will survive, they also have fewer of them. In 2005, the average woman in Haiti could be expected to have five children. Now the figure is about three births per woman.

None of this is to gloss over the remaining challenges: At least 2 billion people are malnourished worldwide, according to the International Food Policy Research Institute in Washington.

Isn’t this season supposed to be about something more profound than shopping and Christmas trees?

So I’d suggest that the successes against poverty should stimulate us to do more — and some steps are remarkably simple. Consider iodization of salt.

When a pregnant woman doesn’t get enough iodine, her baby’s brain doesn’t develop properly. Iodize the salt and, years later, children will do better in school and will have higher IQs.

Another nutritional triumph: that orange sweet potato on your plate. It’s the Mother Teresa of foods, a treasure of vitamin A in particular. It could prevent blindness or death for millions of children suffering from vitamin A deficiency, so aid groups like Helen Keller International are helping farmers grow it in poor countries. Good for Michelle Obama for growing sweet potatoes in the White House garden this year to encourage their use worldwide. The orange sweet potato is gaining ground, and hunger and sickness are retreating.

So tuck into your meal. Join the holiday cheer. The world still has its problems, but as an incentive to do more, let’s acknowledge some reasons for joy.

So bear this in mind: Fewer children worldwide are starving or dying of disease now than at any time in recorded history.