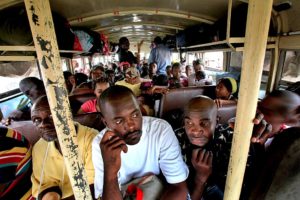 Photo: VOA Photo J. Swicord
Port-au-Prince residents board a bus to leave the capital city for safer rural areas in Haiti
With Haiti still in a state of emergency after last week’s terrible earthquake, many residents of Port-au-Prince are leaving the city, trying to get out any way they can.
The exodus from Port-au-Prince has begun.  With food and water scarce, thousands of people are leaving for the provinces in search of better resources.  Earthquake victim Alexi told us he couldn’t stand the smell of rotting bodies anymore.

“The house collapsed, everybody in the house is dead, and I am terrified to stay,” Alexi said.  For more than a decade, this city of some three million people has been growing, with people from the provinces moving to the big city, looking for work and a better life.  Now some officials contend that a permanent exodus from the city would help the country as a whole.  They say the city never had the resources to sustain millions of people.  The government is offering free bus rides to the provinces.  Health Minister Alex Larsen told us those who can find accommodations outside the city should leave.  ”If the people have some family members in a city outside Port-au Prince, it is better to go there to their families and help relieve the weight on Port-au-Prince,” said Larsen.  But not everyone wants to leave.  We stopped by the national soccer stadium where hundreds of people have been camping out since last week.  Adeline Cassimir told us that Port-au-Prince is the only home he knows.  ”I have houses here, I have kids here, I was born here.  There is no way I will leave the capital,” he told us.  President René Préval says the death toll from the quake now stands at 75,000, but officials estimate the death toll will rise to some 200,000 people.