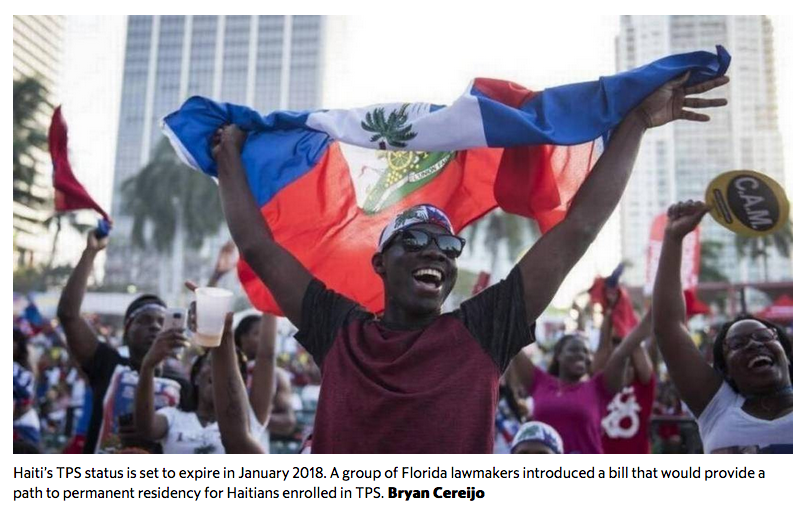 Over 200,000 Haitians and Salvadorans could be forced to leave the United States if the Trump administration ends Temporary Protected Status for the two countries, and Democrats along with Miami Republicans in Congress are pushing for a permanent solution.

But Rep. Ileana Ros-Lehtinen isn’t convinced that most of her fellow Republicans care.

The outgoing Miami congresswoman said Tuesday that the majority of Congress “would not know what TPS is” if asked about it and that there isn’t an appetite from Republicans to give TPS recipients a path to permanent residency.

“I spoke yesterday about TPS, had hardly anyone ask me about it. I spoke again today about TPS, radio silence from my colleagues,” Ros-Lehtinen said. “There’s just no interest for immigration reform generally, and I don’t think there’s much appetite to help these two particular groups of people. It hurts to say it but it’s the political reality.”

Ros-Lehtinen and the entire Miami delegation in Congress — Democrats and Republicans — are united behind a bill by Rep. Carlos Curbelo that would allow Haitians, Salvadorans, Hondurans and Nicaraguans who receive TPS to obtain a path to permanent residency.

The Department of Homeland Security announced on Monday that TPS will expire in 2019 for Nicaraguans, while Hondurans will get a six-month extension until July 2018. The Trump administration has not yet announced a determination for Haitians and Salvadorans.

“While I’m disappointed in the administration’s announcement, these continued short-term extensions have created anxiety and uncertainty not only for these immigrants and their families, but also for their employers and neighbors whose prosperity also depends on them,” Curbelo said in a statement. “Congress has an opportunity to change that, and I’m grateful the Administration has called for a permanent solution from Congress.”

But finding a permanent solution will be a political challenge for House Speaker Paul Ryan and the Miami Republicans. Conservative Republicans have railed against any attempt to expand immigration, and the March 2018 deadline for Congress to find a legislative solution for young people known as Dreamers, who came to the country with their parents illegally as children, looms ahead of Nicaragua’s January 2019 TPS elimination or Honduras’ possible elimination in July 2018.

“For Congress to take over what has traditionally been a legislative branch decision and to say, ‘No, we will take it over and we will extend it,’ I don’t think there’s any appetite for that,” Ros-Lehtinen said. “It’s taken us a long time to get where we are, to get a lot of people in favor of a legislative fix for Dreamers. That’s where the priority is. It does not mean that I think less of Hondurans, Nicaraguans or Haitians, obviously not. But I know between what I want and the reality is a whole mile and that is not going to happen.”

California Democratic Rep. Jimmy Gomez said that the Trump administration ended TPS for Nicaraguans on Monday because they are a smaller group that will provide less political opposition. About 2,500 Nicaraguans receive TPS compared to more than 200,000 Haitians and Salvadorans.

“I think this is a way for them to start with a small group, without much commotion and political upheaval, and allow them to push on to other groups,” Gomez said. “Honestly, I haven’t seen much appetite here to kind of pass any kind of immigration reform.”

Gomez said it’s harder to get the larger public to realize the difference between Dreamers and TPS recipients, noting that changes to both policies will affect families, like a constituent in Los Angeles who is allowed to stay in the United States under TPS but who has a daughter that is a Dreamer.

“A lot of the interest and focus is on the Dreamers because they are young kids with lots of potential, but these other folks are part of their families,” Gomez said. “You might not think that 2,500 people is a lot, but to the families and the communities they belong it’s a lot.”

Florida lawmakers have spent the past few months trying to draw more attention to TPS, as Fort Lauderdale Democrat Alcee Hastings sat down with the Haitian ambassador in September to discuss ways to tie the TPS issue to the Dreamer issue. And Sens. Bill Nelson and Marco Rubio are in favor of extending TPS for an additional 18 months, though Rubio’s office did not immediately respond when asked if he supports Curbelo’s bill.

Rep. Mario Diaz-Balart, R-Miami, who signed onto Curbelo’s bill on Tuesday morning, also cautioned that sending thousands of people back to their native countries could have negative economic effects abroad, since many TPS recipients send remittances back home.

“The loss of remittances would be relatively catastrophic,” Diaz-Balart said. “Are we potentially… creating another problem which is a huge outflow of people from those countries? It’s an issue that has me very concerned and that’s why I signed it today.”

Gomez said there’s one potential path for passing a TPS fix in Congress, especially if the Trump administration delays eliminating TPS for Haiti and El Salvador until 2019 like Nicaragua: Democrats could gain control of Congress after the 2018 election.