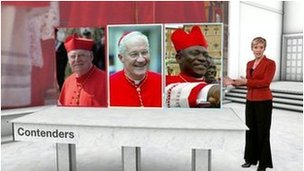 Cardinals of the Catholic Church have failed to elect a new pope on their first day in the Vatican conclave.

Black smoke rising from a chimney above the Sistine Chapel indicated that their ballot had been inconclusive.

The 115 cardinal-electors will vote four times daily until two-thirds can agree on a single candidate.

The election was prompted by the surprise abdication of Benedict XVI. There is no clear frontrunner to take over from him as head of the Church.

The vote was the first held by the cardinals since they entered the conclave on Tuesday afternoon, and was not expected to produce a positive result.

The cardinal-electors have been cloistered inside the Vatican to elect the next pope under the gaze of some of the world’s most famous fresco paintings, which were recently restored.

The Renaissance artist Michelangelo decorated not only the entire ceiling and a wall of the Sistine Chapel where the cardinals are holding their ballots, but also the nearby Pauline Chapel where they first assembled to walk in solemn procession chanting ancient litanies.

Participants in this 75th conclave of the Roman Catholic Church will thus have time to ponder Michelangelo’s esoteric view of the Creation, Heaven, Hell and the martyrdom of the first Pope, St Peter.

The buzz in Rome is that we may expect a new pope to be elected by Friday night, perhaps even earlier. There is no desire among the cardinals for a prolonged conclave.

The Italians, although still numerically superior to the rest, have less clout in the electoral college after two successive non-Italian papacies, won first by a Pole and then a German. An American pope seems increasingly unlikely, despite a strong American showing during the pre-conclave meetings. We shall have to wait a bit for the first African pope in modern times.

The result will surely be a surprise. But change at the top may take some time to filter down to the faithful.

Crowds who had braved rain and storms to watch the start of the conclave on big screens in St Peter’s Square cheered as the black smoke appeared.

The electors will now return to their hotel for the night and go back to the chapel on Wednesday morning to resume voting.

White smoke from the chimney will indicate that a new pope has been chosen.

Pope Benedict’s resignation and the recent damage to the Church’s reputation make the choice of the cardinal-electors especially hard to predict, the BBC’s James Robbins in Rome says.

The 85-year-old Benedict stepped down last month, saying he was no longer strong enough to lead the Church, which is beset by problems ranging from a worldwide scandal over child sex abuse to allegations of corruption at the Vatican Bank. 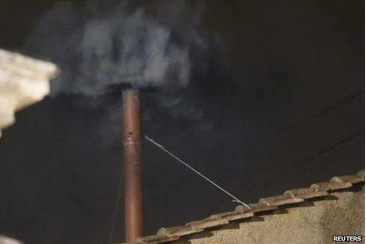 Each man in turn stepped up and placed his hands on the Gospel to swear an oath in Latin.

Afterwards Msgr Guido Marini, papal master of ceremonies, called out the words “Extra omnes” – “Everybody out” – and the chapel doors were locked to outsiders.

From now on the cardinals will eat, vote and sleep in closed-off areas until a new pope is chosen.

Jamming devices in the Sistine Chapel should block all electronic communication and anyone tweeting would in any case risk being excommunicated.

Earlier on Tuesday the cardinals attended a “Mass for the Election of the Supreme Pontiff” in St Peter’s Basilica.

In his homily, the Dean of the College of Cardinals, Cardinal Angelo Sodano, praised the “brilliant pontificate” of Pope Benedict and implored God to grant another “Good Shepherd” to lead the church.

Benedict – now known as Pope emeritus – resigned on 28 February after eight years in office, citing ill health. He was the first Pope in six centuries to do so.

As Cardinal Joseph Ratzinger in 2005, he was the marked favourite ahead of the conclave and was elected pope after just four rounds of voting.

The vote for his successor is expected to take much longer.

After 10 general congregations open to all cardinals, regardless of age – at which 160 cardinals spoke of the issues facing the Church and the qualities needed by its next leader – no clear frontrunner has emerged.